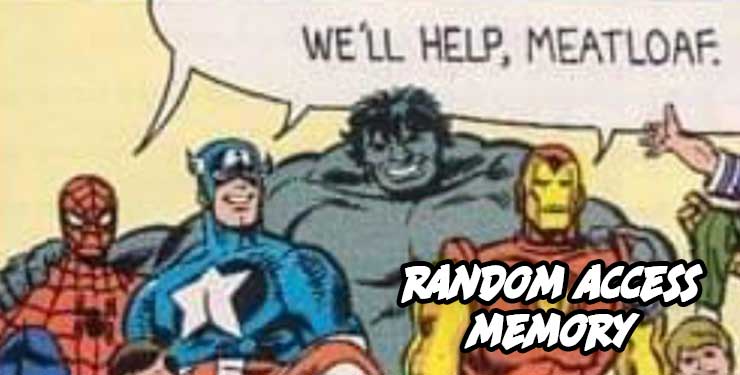 Today, Rand goes deep into the archives of Longbox 1987 and discovers… Meat Loaf? Anyone out there remember this thing?  It haunts my dreams.  Here we have an ad created specifically to run in comic books, and the artist who drew it appears to have never seen a comics page in their life.  I don’t really know what’s worse: the creator’s complete lack of knowledge of how comic book storytelling works, their clear ignorance of Meat Loaf (more on that in a bit, but they don’t even know not to write his name as one word), or the fact that the ad fails to even indicate (let alone properly communicate) what they are advertising.

Let’s take a look at this thing panel by panel.

We open with a very weird lie.  Even if there were such a thing as a “Humongous Rock Star of the Universe,” (there’s not) Meat Loaf was never that.  Worse, in 1987 he was about as far from that as one could imagine.  When this ad ran, he had just released his fifth album, Blind Before I Stop.  (You haven’t heard of the three albums before that one, either.)  Between 1977’s Bat Out of Hell and 1993’s Bat Out of Hell II: Back Into Hell (I don’t have time to make fun of that right now), Mr. Loaf went through one of the biggest dry spells in the history of rock music. We open with Meat rocking out on stage, playing guitar like he never has before.  And I don’t mean that in the “What a Feeling/She’s dancing like she’s never danced before” Flashdance sense, but rather in the sense that if Meat Loaf has ever touched a guitar, it’s news to me.  (And wouldn’t it have been awesome if Flashdance was actually about an inexplicably beautiful welder who literally danced like she’s never danced before?  I’d pay to see that.)

But back to Meat Loaf’s guitar.  It appears to be either coming out of his chest, or is being played with the strings muted against his torso.  Or maybe it’s just a broken off guitar neck?  Either way, there’s no way he could be playing that guitar.  Also (and this seems like a minor quibble at this point) where’s his right arm?

And perhaps all of that might be acceptable if the guy imaged looked or dressed even remotely like Meat Loaf.  The opening panel of this ad shows a guy who doesn’t look anything like Meat Loaf, wearing a red leather jacket like Meat Loaf never did, playing a guitar (which Meat Loaf doesn’t do — he’s a singer) that is aimed the wrong way (presumably so we can see the word “Meatloaf” written on the back of the headstock and thus have a prayer of knowing who this is supposed to be), all while thinking a non-sequitur about Special Olympians.  Okay, it might not be a non-sequitur — for all we know he’s been thinking about Special Olympians all night — but they made the decision to start the ad there. And this is more than an academic question.  Let’s not forget that this is an ad, so if he’s asking us to help him give Special Olympians everything he’s got, we need to know what that means, and we’re rapidly running out of panels.

So we cut to a scene miles from the darkened auditorium were Meat Loaf was just performing.  From the light backdrop I’m guessing this is a photography studio.  A bunch of Marvel superheroes are surrounded by children.  The heroes speak a five word response — in unison, the way no one ever does.  Well, all except the eerily smiling Hulk, Wolverine, and the recently back from the dead (for the first time) Jean Grey.

Like the heroes they are, they ask Meat Loaf the right question. Meat Loaf, who has switched from a red leather jacket to what appears to be a red collared wizard’s robe, tells us to return a coupon.  So we’re out of panels, and still don’t know what is being asked of us, other than to mutilate our comic and buy a stamp.  All we’ve really learned is that Meat Loaf doesn’t know what coupons are.  Also, that guy looks even less like Meat Loaf than the guy in the first panel.

Let’s take a closer look at that “coupon”: Ah!  Meat Loaf is kindly asking us for a donation to help the Special Olympics.  Sounds great.  Not happy about having to take scissors to my comic book, but fine.

Wait a minute.  This is an ad for a record?  Why would they leave that detail to the fine print?

So they got Meat Loaf to record a brand new song (called “A Time For Heroes,” I’m guessing from context clues) and didn’t find it necessary to mention that at all in the ad itself?  I’ve got a better ad design for you:  A photo of Meat Loaf with his arm (his only remaining arm, apparently) around a Special Olympian, with a headline informing us that we can support the Special Olympics by buying this cool new song.  I mean, I guess I get the whole “advertise in a comic with a comic” thing, but you’d think they’d have hired someone who a.) can draw and b.) understands even the most basic ideas about panel transition and comic book storytelling.

Looking up Meat Loaf’s “A Time For Heroes” online I learned that the song also features Tangerine Dream and Queen’s Brian May.  (Lots of ledes being buried here.)

Listen to This Thing!

Why not draw Brian May playing the guitar?  Why not put any of the words “Brian May” or “Queen” or “Tangerine Dream” or “Buy This New Song” in the ad somewhere?  Did any of you actually buy this thing?  I need to know.