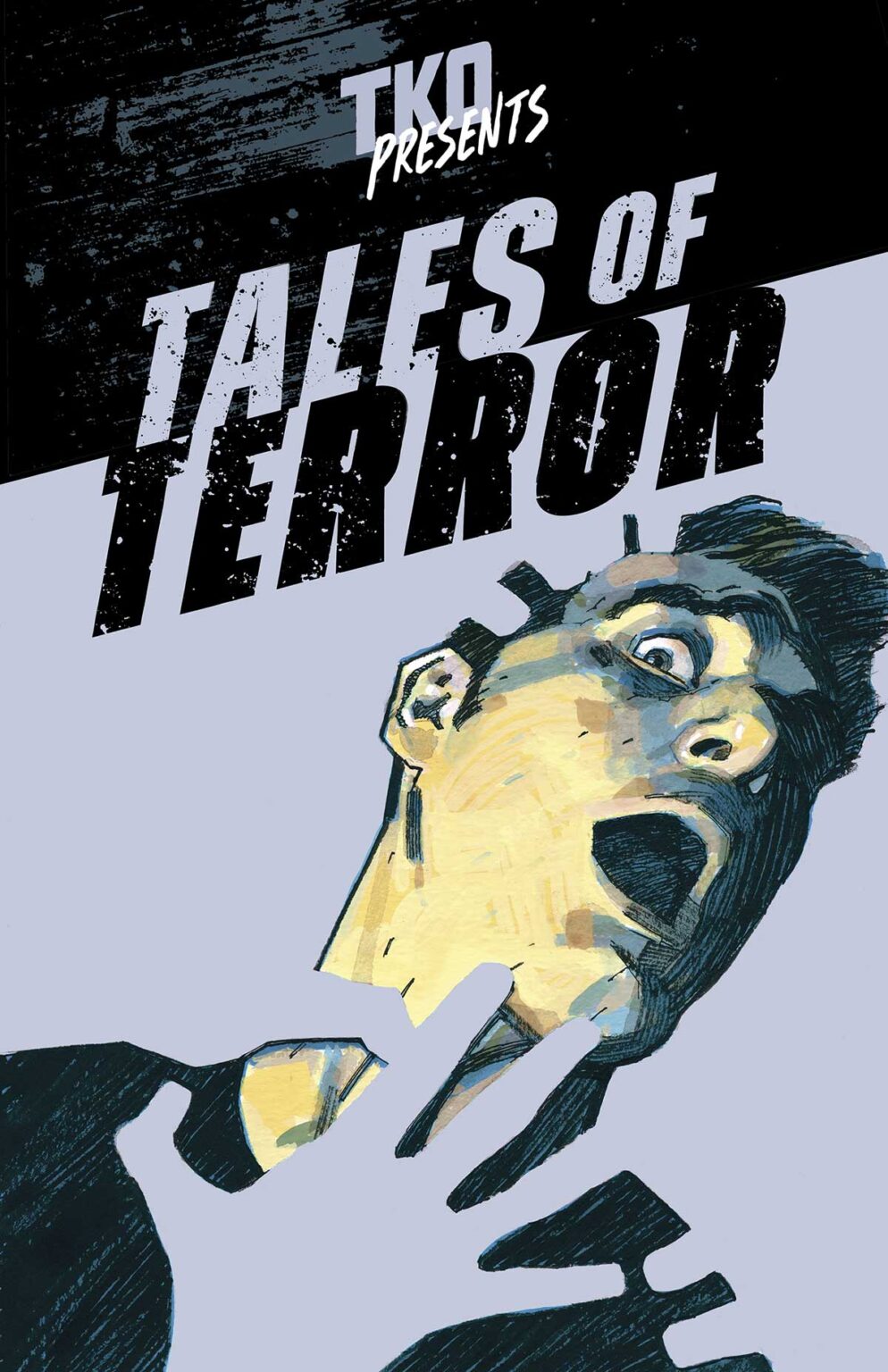 If you are looking for some scary comics to read this holiday season, TKO Studios has announced the upcoming release of TKO Presents: Tales of Terror, an anthology of harrowing tales.

About TALES OF TERROR:

SEEDS OF EDEN: When a space pioneer attempts to create a self-sustaining colony Jupiter, her visit takes an unsuspecting and deadly turn. From Liana Kangas and Joe Corallo (She Said Destroy) and Paul Azaceta (OUTKAST, Daredevil, Spider-Man, Punisher Noir).

THE FATHER OF ALL THINGS: The year is 1914 and Europe is at war. Idealistic 14-year-old Georg is ready to defend his country, but nothing cold prepare him for the supernatural horrors that await beneath the trenches. From Sebastian Girner (Shirtless Bear-Fighter!, Scales & Scoundrels) and Baldemar Rivas (Unearth).

NIGHT TRAIN: When Neal’s new baby brother begins to drive him insane with sleepless nights, Neal starts seeing a spectral tarin with a ghostly conductor offering to solve his problems by taking his baby brother far away. From Steve Foxe (Razorblades: The Horror Magazine) and Lisandro Estherren (Redneck: The Last Contract).

DAME FROM THE DARK: Magic isn’t always glitz and glam, and sometimes there are darker secrets lurking behind the trap doors and red velvet curtains. Private detective Tommy, and his spirit comrade Eve, have come to teach magician ‘Le Samson Fantastique’ that some acts aren’t always illusions. From writer Rob Pilkington and artist Kit Mills.

HAND ME DOWN: Reuben and Lyra are on the brink of a failing marriage when they are invited to a risqué soiree hosted by wealthy neighbors in their glitzy new suburb. But things take a demonic turn when they realize they will be taking home a lot more than a party favor. From Alex Paknadel and Jen Hickman.

KILLIAMSBURG: The snowstorm of the century is barreling down on Brooklyn, but that doesn’t stop a group of hipsters from throwing an ironic 90s themed party. The snow is different though… it speaks, it moves, it craves human flesh! Ca our flannel-wearing, craft-beer drinking group unironically survive the night? From Erick Freitas and Jelena Dordevic.

RIVER OF SIN: Children are being found dead and mutilated in the woods. Alonso fears this might be the fate of his daughter. In a desperate hunt for answers, he and the other grieving parents must take matters into their own hands. Could it be the suspected Bruja, hungry for young blood, or is there a bigger secret among the townsfolk? Discover the truth in RIVER OF SIN by Kelly Williams and Chas! Pangburn.

ROOFSTOMPERS: Far away from the pressures of being a surgeon in New York City, Cassie decides to take a solo hunting trip to Wyoming. There she is attacked and luckily rescued by a middle-aged couple living in an isolated cabin with their son. After weeks, she isn’t getting any better and she begins to question the couple’s motives and the strange nightly visits that they dismiss as the “Roofstompers.” From Alex Paknadel and Ian MacEwan.

THE WALK: Alice and her team of aquatic explorers are eager to study what lies beneath the Atlantic Ocean. Stationed at the Midnight Zone, 2000 meters below the surface; their supplies start to run out. In a dangerous expedition to survive, they must push through but soon realize that the ocean is more vast, dark, and mysterious than they could have ever imagined. From Michael Moreci and Jesus Hervas.

TKO Presents: Tales of Terror arrives digitally on October 20, 2021, and in print on November 30th.