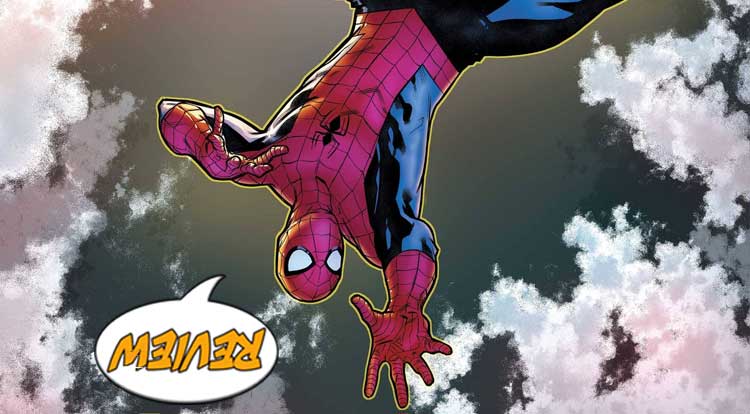 Baron Zemo has injected Spidey with his designer cocktail and now he’s falling to his doom…  So, y’know, Tuesday.  Your Major Spoilers review of Non-Stop Spider-Man #5 from Marvel Comics awaits!

Previously in Non-Stop Spider-Man:  After two students overdosed on a drug called A-Plus, Peter Parker teamed up with reporter Norah Winters to investigate.  Upon discovering that the source of the drug was Baron Zemo, Spider-Man had to face the Zapata brothers, a team of luchadores, before hitching a ride on the Baron’s private jet… and getting injected with A-Plus himself!

Non-Stop Spider-Man #5 begins with Baron Zemo and his hired hand Wülf gloating over Spidey’s impending doom, while the Web-Head tries to keep his mind intact.  Wülf smashes his stash of enhanced Narcan, leaving Spider-Man to overdose, but the hero won’t go down that easily.  As his mental state deteriorated, he tries to fight them off, only to end taking several bullets from Zemo’s Luger.  The Baron puts his gun to Spidey’s head, only for Wülf to turn on his erstwhile boss, with the sudden backup of a team of animal-masked creeps.  The mercenary reveals that he has decided that Hydra is an idea whose time has passed, throwing Zemo out of the plane and declaring the supremacy of The Immaculatum!  Spider-Man leaps after Zemo to save him, only to find that he’s out of webbing, badly wounded and only has the Baron’s sword to aid him.

It looks bad, but…

…it ends even worse.  It’s been a while since the ending of a comic book has left me actively angry, but this one pulled it off, as it ends in mid-sentence, with Spider-Man transformed into a horrific spider-monster and a big “THE END.”  The editor’s note at the end indicates that this book has been cancelled, but that ANOTHER Spider-Man event will start soon that should complete this story.  (It’s a smug and self-congratulatory moment, and somebody should have known better.)  Given that the issue’s story takes place over literally five or ten minutes and involves more than one overtly racist statement, concept or new super-team, it’s tough to justify paying four bucks for it.  The layouts are quite inventive throughout, though, showing us Spider-Man’s devolution by taking a standard panel format and rotating it.  It’s really successful at showing us how off-balance our hero is (especially as this means that readers to get to see everything or read all the dialogue balloons), but the multiple artists blunts how successful the technique is.

I remember reading an earlier issue of this series (though I can’t find a review of it, and given that it’s been eight months since the first issue came out, making me think that I may have covered it on a Major Spoilers Podcast) and being annoyed at the pacing.  Non-Stop Spider-Man #5 ups the ante and tells my annoyance to hold its beer, telling a frantic story at the top of its lungs with eight artists in the mix and a final page that just stops, but promises that if we’re willing to commit to ANOTHER series of 4 or 5 dollars comics, it’ll all make sense, for a muddled and disappointing 1.5 out of 5 stars overall.  Several parts of this book are visually impressive, but there’s just no way to overcome the moist slap-in-the-face that is this issue’s climax.

Eight artists make for an inconsistent visual experience, which could easily be forgiven on the strength of the parts that work, if not for the book's horrible ending.