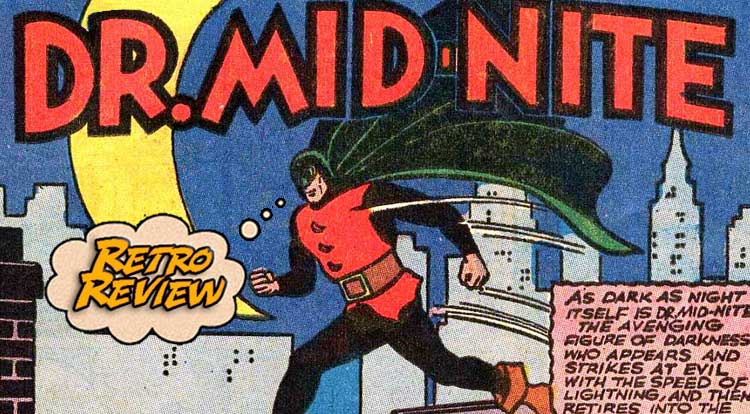 He’s one of the stalwart members of the Justice Society, and even a TV star… but do you know the full story of Doctor Mid-Nite?  Your Major Spoilers (Retro) Review of All-American Comics #25 awaits! Previously in All-American Comics:  In many ways, he’s sort of a lower-tier version of Batman, operating (in more ways than one) in the dark to take out criminals of all stripes.  Though not a founding member of the JSA, Doctor Mid-Nite is one of it’s longest tenured members and is one of, if not THE earliest superhero disabled superhero.  His creators, Stan Asch (also responsible for the existence of Johnny Thunder) and Chuck Reizenstein (the writer behind Mister Terrific) actually left the feature quickly, but his adventures continued in All-American through 1948.  But his first appearance starts with an accident, and a policeman rushing into the office of Dr. Charles McNider, begging the renowned surgeon to help with an injured mob witness. The explosion left everyone but McNider dead, but it robbed him of his sight, forcing him to give up his medicine career and turn his remarkable mind to the field of writing.  With the help of his assistant, Myra, he set out to expose the thugs and murderers who operate in the shadows, in the hopes that sunlight with provide the antiseptic to their toxic criminality.  It also brings him to the attention of Killer Maroni, the very same mob boss whose lackeys took his sight… or so everyone thought. Asch and Reizenstein crib an entire sequence from Bill Finger, Gardner Fox, and Bob Kane (a sequence which first appeared only a year before, reminding us of how disposable these stories were meant to be) featuring an avian creature smashing through his parlor window.  In this case, it’s an owl, whom the Doc names Hooty and nurses back to health, once he realizes that his vision is perfect in the dark.  Throughout this story, I haven’t been particularly aware of Asch’s art, but his rendition of Hooty is hilarious, straddling the line between cartoony and realistic.  In particular, I love that second-to-last panel, where an injured Hooty is clearly done with McNider’s crap.  But elsewhere in the city, Killer Maroni continues his evil ways, leading Charles to realize that he can do more than write about stopping crime. Ah, yes, the old masquerade costume routine!  I hate when stories use that as an explanation for how a superhero gets their gear.  Still, it’s a pretty solid look for the Golden Age, with the dark green and scarlet working together with the blacks and browns.  These panels also once again tip the hand of the creators as to their desire to ape Batman.  It makes sense, given that All-American Comics came from All-American Publications which hadn’t yet fully merged with Detective Comics, meaning that AA didn’t actually HAVE the full editorial use of Batman.  This, incidentally, is part of why the JSA didn’t feature Superman and Batman regularly, even though the JSA was composed of both All-American characters (Atom, Flash, Green Lantern and Hawkman) and National/Detective characters (Doctor Fate, Hour-Man, Spectre and Sandman).  Regardless, AA’s would-be Batman sets out with his new-fangled Blackout Bombs to take down Maroni’s mob… I also love this sequence, wherein our hero momentarily sets aside his crime-punching long enough to save the life of patient whose surgery was interrupted by the villain’s tampering with the electrical grid, pulling off a complex medical procedure in mid-story and proving his dedication to saving lives.  He’s also a fan of more traditional heroic pursuits, such as face-punching, and also show-tunes. That last panel, by the way, gives away one of the smaller secrets of Retro Review, in that the images for today come from a reprint in a ’70s issue of Justice League of America, since the original comic is hard to find for less than twenty grand, unless you’re willing to read blurry century-old microfiche.  (I did use that fiche to make sure no meaningful changes were made to the comic, though.  I’m not a philistine, here.)  All in all, Doctor Mid-Nite’s debut in All-American Comics #25 is quite good (especially compared to competing stories of 1941) featuring clear storytelling and a number of bits that cement Dr. Mid-Nite as apart from so many of his comrades, earning 3.5 out of 5 stars overall.

Dr. Mid-Nite is a hit, even if I can’t forgive a surgical genius and published author for the weird, whimsical misspelling of his name.

While not flashy or show-offy in either story or art, it's an above-average effort, especially for the era, and gives Mid-Nite his own superheroic personality and and corner of heroism.