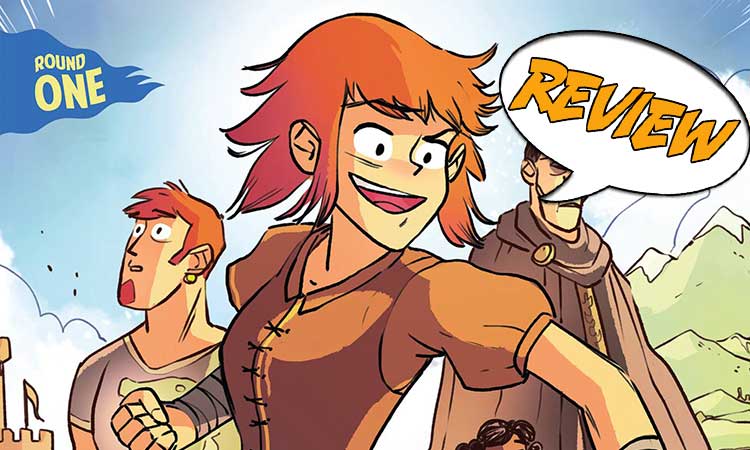 Lydia would rather become a Wrassler than go into the family business of politics. But little does she know how suddenly her life will change. Find out how in Wrassle Castle Vol. 1 from Vault Comics/Wonderbound! Previously in Wrassle Castle: Lydia Riverthane’s older brother John is a successful wrassler, and the youngest instructor at Wrassle Castle. Through wrassling, and the Knights of the Ringtable, the Kingdom of Pinnland has been prosperous for hundreds of years. Young Lydia wants nothing in life more than to become a wrassler herself, but her parents have other plans for her.

SETTING THE SCENE WITH STYLE AND VERVE

I could not wait to read Wrassle Castle Vol. 1! Vault Comics has produced a number of impressive titles over the past few years, and I was excited to find out that they were starting Wonderbound, an imprint for younger readers. How might these books measure up?

I am happy to report that Wrassle Castle is an utter delight! Taking place in a medieval-type fantasy setting, it follows the story of Lydia and her friends who are right on the cusp of deciding what they are going to do with their lives. With Lydia, it’s pretty clear. As the book opens, a bear has eaten her potato chips. She explains (to the bear) that this is a pretty low blow, which makes her mad, and being mad makes her wrassle. And she promptly wrassles the bear’s lights out.

Lydia is a pretty good wrassler despite not having much training. Her brother John is already a famous and much-beloved wrassler, but their parents are in politics and they have decreed that Lydia should follow in the family business. I enjoy that this twist on the trope of the girl not getting to follow her dreams actually involves her training for a serious career. At any rate, she has to wrassle on the sly.

This is where her friends come in. They have formed a group to give each other alibis when they’re off doing what their parents don’t approve of. Chelsea keeps finding and breaking up with boyfriends, often terrible ones. Nyle has dropped out of school to pursue acting. Dee rescued a family pig who was slated to become pie filling. Everyone has some little secret.

One day they see a prison wagon hauling captives including a thief named Cantrell who was caught by Lydia’s brother. What they don’t see is that a little while later, a masked man meets the wagon and frees the prisoners. They have been brought here to be hired for a job – a job that will allow Cantrell to take is revenge against John!

The story is balanced throughout with humorous vignettes about what the young people are doing at any given time. Lydia engages in some Street Wrassling and Road Wrassling. While she is pretty talented and a really good wrassler, she is not invincible. When she gets pinned by one opponent, she is not disheartened. She loves wrassling so much she declares he did an awesome job and was already looking forward to meeting him again.

One day John was supposed to meet Lydia for a picnic and maybe some wrassling. He doesn’t show up, but when she goes back into town, she hears whispers that he has been imprisoned as a thief – he stole one of the of the Wrassling Folios, the books that list all the official wrassling moves. These books are sacred here. Did he do it? Why would he steal it? Is there some larger plot afoot?

FULL OF LIFE AND CHARACTER

The art of Wrassle Castle Vol. 1 is energetic and breezy. Wrassling is a huge part of life in this world and in this story as well. The fight scenes are broken into wrassling moves (some of which are official and others of which, like many of Lydia’s, are not) so there are energetic panels with lettering that is just as energetic. To add to the fun, as the story progresses, we start getting power ratings for the moves so we can tell just how successful (or not) they were.

Another touch that adds to both story and flavor is that as the plot progresses and we start meeting more and more characters, we get shown their information written up as trading cards. At first, it’s cute, but since this is a whole graphic novel and it introduces a lot of people, it becomes very helpful. In the format, we learn some key information, but we also learn things that appear to be random facts, which is actually a very clever way to plant potential plot information for us for the future.

BOTTOM LINE: OFF TO A GREAT BEGINNING

Wrassle Castle Vol. 1 is full of interesting and diverse characters. There is so much fun to be had with them, and it is easy to identify with them. The major plot is interesting and dramatic, with political overtones that could play into Lydia’s family more than she might expect.

Introducing Lydia and her friends in a kingdom where Wrassling is at the center of life!