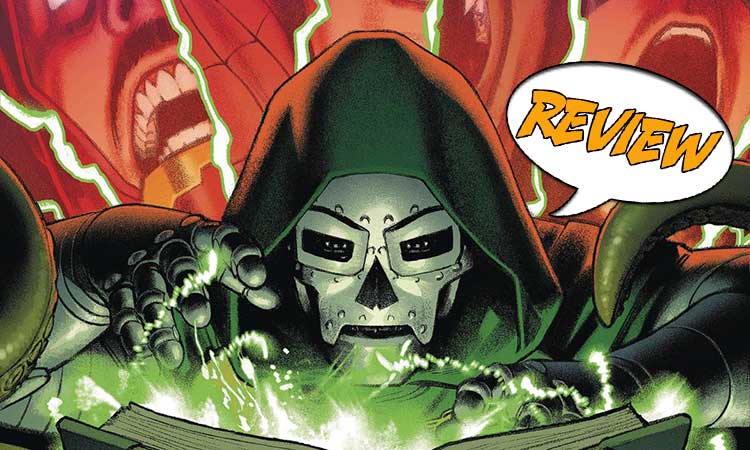 Someone has read from The True Darkhold, and it’ll take a team and their sanity to stop the god Cthon from destroying everything.  Your Major Spoilers Review of Darkhold: Alpha #1 awaits!

Previously in Darkhold: Alpha: For hundreds of years, scholars and heroes alike have searched for the complete text of the Darkhold – a.k.a. the Book of the Damned, written by the elder god Chthon. Now one of the greatest sorcerers in the Multiverse has found it.

Darkhold: Alpha #1, begins at an excavation site where Victorious has discovered the true Darkhold. Things then shift to Scarlet Witch’s nightmare that has the heroes of Earth being slain by the forces of Chthon,   She tracks down The Darkhold and confronts Victorious, Doctor Doom arrives and claims to have read from the pages.  Wanda informs him that by doing so he’s formed a bridge that Cthon can use.  The two look into The Darkhold to find hints for stopping Cthon, and come across a reference to 5 defenders who once stopped him.  Doom wants no part of it and heads into Cthon’s realm on his own.  Afterwards, Wanda summons the modern day equivalents to the ancient defenders which turns out to be Iron Man, The Wasp, Blade, Black Bolt, and Spider-Man.  She fills them in and tells them that they each need to read from the book to temper themselves to insanity.  Victor then returns, completely wrecked.  The heroes read from the books, and face some unexpected consequences.

As is tradition (it seems), it’s the time for Marvel’s annual, weird campy attempt at a horror story.  This time instead of K’un Lun zombies, they’re going with insanity inducing elder gods.  So far, it’s not bad.  As mentioned earlier, it’s campy, a little cheesy, and that ending is downright silly, but they have a decent framing narrative for the event going forward. A lot happens in this book and it’s handled pretty well, considering most of it was just to set up the last page. It would’ve been nice if the book had shown any sort of acknowledgment of the sillier aspects of it’s contents, but it seems to be playing it straight, which takes some of the fun away. One of my favorite things about these types of serieses are the teams they put together for them.  It seems like these smaller events always have the strangest collections of heroes and team-ups.  This is where this book definitely doesn’t disappoint.  Iron Man and Spider-Man are givens, you have to have one of them on a team, but then you add Black Bolt, Wasp, and Blade and you have yourself a weird team.  Not to mention Doctor Doom and Scarlet Witch on the periphery.  Although it’s unclear whether these characters will have much interaction because it seems like going forward the titles falling into this event are more individual focused, But who knows?

For the most part, the art in this issue is fine.  The scenes with Cthon on Earth and in his own realm are creepy and grim and for an issue that takes place primarily in a cave, things didn’t feel dull setting wise.  The weirdness comes right at the end, where we see our Darkhold influenced heroes.  While Iron Man, and Black Bolt have some Cenobite flavor going on, Spider-Man and Wasp kind of just look as if they’re wearing costumes that were unlocked in their respective video games (if Wasp had one), and apparently for Blade, insanity just means dreadlocks. They’re just disappointing design wise.

Darkhold: Alpha #1,  does what it needs to do.  It sets up the event and gives people a taste of what to expect and there are bits that seem interesting.  There’s just not a lot here to make things memorable.  Also, the character design at the end is pretty uninspired.  3 out of 5 stars.

Based on Darkhold: Alpha #1, it’s really hard to gauge if this event will be good or not and that’s because this issue is so full of ups and downs. There’s nothing here that really sets it apart, unless you’re a big fan of elements of Lovecraftian horror.