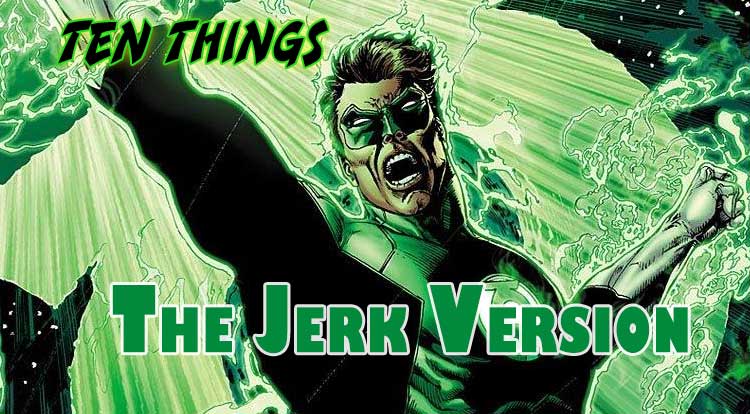 I just got a call from the store and they’re runnin’ out of these guys!  Welcome to Ten Things: The Jerk Version!

Whooshman-Bicarbonate Films, in conjunction with An Amateur Comics Historian and your unpleasnat, but not quite evil doppelganger, Presents:

10) THE BATMAN WHO LAUGHS Hailing from Earth Negative Twenty-Two, this jerk version of Bruce Wayne was infected by The Joker with a modified Joker venom that turned him into a monstrous hybrid of Joker and Batman. In keeping with DC’s apparent policy that Batman always wins, regardless of why, he murdered his world, then graduated to trying to kill the whole universe, combining the terrible “unpredictable Joker will do anything” trope with the terrible “Batman is always two steps ahead” trope for an utterly unappealing monster of a character. The Raleigh Lund of Earth-31916, the world of Supreme Power, is a horrible jerk version of The Shape of Earth-712, home of the Squadron Supreme. Like so many of his cohorts, this Shape is a grotesque parody of humanity: Lazy, fat and stupid, he got his powers while asleep on the job as a janitor. Adding insult to injury, his back story includes being the abandoned son of a prostitute, eating out of garbage cans and being set on fire (!!) as a child.

Given that the original Shape was a mentally handicapped shapeshifter, it’s a pretty big shift. After Christopher Smith’s death, the United Nations appropriated his nom de guerre and color scheme for a member of the League Busters team, a paramilitary unit dedicated to taking down Justice League International. Though Peacemaker I was a murdering, blood-crazed raving madman by the time of his demise, Peacemaker II was little more than a brutal thug with a big gun, a sort of proto-Magog. It takes a special kind of jackwagon to be the Jerk Version of a character who is himself a gritty revamp of a Silver Age patriotic hero.

They have also never explained how Smith returned from dying.

The leader of The Oddities, a four person team featuring a rock man, a pyrokinetic and a see-thru girl, Ethan Odd is the brains of their fantastic foursome. He’s also arrogant, combative, disrespectful, thin-skinned and likes to taunt ex-wife Afterlife about his current relationship with Hotstreak, both members of the Oddities. He also works with rogue hero Daedalus in his bid to take over the world, forcing the members of the Freedom Machine to fight him, presaging the real Mister Fantastic’s bad decisions during the superhuman Civil War. HIs weird bulging eyes mark him as a native of Qward, a world in the anti-matter universe of DC Comics, so you know that Element Man (real name unrevealed) is not on the side of the angels. A nefarious counterpart to Metamorpho, he and his fellows were recruited for the Conglomerate after team leader Booster Gold left, and he used his transmutational powers to nearly kill his counterpart before Green Lantern revealed the team’s secret. And hey, speaking of antimatter, this evil alternate jerk Superman (likely a member of the El family, but never named) hails from one of several realities dubbed Earth-3 and is a member of the Crime Society. Unlike most Ultramans, he and his team are evil duplicates of the Justice Society rather than the Justice League, which also implies that perhaps his family name is ‘L’ and not ‘El.’ Either way, he’s a complete train wreck of a person and it’s always a joy to see him beaten down. The leader character of Irredeemable, The Plutonian used to masquerade as human milquetoast Dan Hartigan before a psychotic break turned him from beloved superhero to mass murderer. A jerk version of the Silver Age Superman (as opposed to the modern age version that Ultraman is inverting), Tony’s descent into madness is made all the more terrifying by how little it takes to convince him to stop saving lives and decide that humanity’s day is done. Plutonian destroys the entire Republic of Singapore and sadistically forces other heroes who come to save the day to choose exactly ten people who may live.

It’s one of the rare times that I don’t roll my eyes at the “Evil Superman” trope. An invisible girl and member of Earth-12’s Kookie Quartet, Sophie Rickard and her crew gained super powers from her husband Rod, aka Mr. Manplastic. Once they were superhuman, their bickering became super as well, with the team (including her little brother Jerry Drizzle, The Matchstick Kid and her husband’s best friend Bjorn Andersen, the ever-lovin’ blue-eyed Whatchamacallit) spent more time fighting each other than any villain. In fact, in their first outing, the Quartet confronted the sad sack heroes known as the Inferior Five and lambasted them for their sub-par heroics, then immediately got soundly defeated by an alien invasion.

That one may be worthy of the Jerk Hall of Fame.

A lab-grown superhuman from the test tubes of Project Cadmus, Juice (no other name given, with a strong possibility that he was never given one) is a member of the Ultimen and was created to be a loyal government-controlled alternative to the heroes of the Justice League. Unlike the League, Juice never had those pesky moments of conscience or disobedience. The team was well on the way to superhero fame when they discovered the truth of their origins and went on a violent rampage that ended with them back in Cadmus custody and suffering from physical and neural degeneration.

He’s a jerk version of the Super Friends’ Black Vulcan, with partners who emulate Samurai, Apache Chief and the Wonder Twins. El Dorado wasn’t duplicated, because nobody messes with El Dorado.

Once again, this week’s topic, The Jerk Version, is all me, but feel free to follow along @MightyKingCobra to suggest your own! There’s always more Ten Things madness on my Twitter or check out the full Twitter archive here! As with any set of like items, these aren’t meant to be hard and fast or absolutely complete, if only because jerks have been the Next Big Thing in comics for about fifty years. Either way, the comments section is below for just such an emergency, but, as always: Please, no wagering!