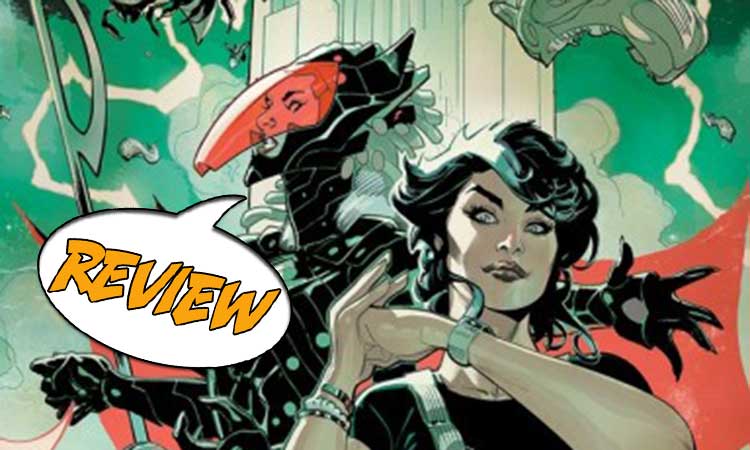 Baroness Bizarre leads her swarm of minions to attack! Does Claire Connell have what it takes to hold her off? Find out in Adventureman #5 from Image Comics!

Previously in Adventureman: Claire Connell and her son Tommy are huge fans of the stories of Adventureman. But one day, an address in one of the books leads Claire to an Art Deco skyscraper that didn’t used to be there – the site of the Adventureman headquarters. It’s actually a real place! One thing leads to another, and Claire discovers she has gained powers. She is becoming Adventureman! Returning to the skyscraper, she meets Gentleman Jim, a hero from the past, and learns that their enemy, Baroness Bizarre is poised to return to Earth in an attempt to take it over!

STRAIGHT AHEAD INTO ACTION!

Adventureman #5 opens with a brief flashback of Phaedra Phantom talking with Akaal, the assassin, on a train. (He is busily, and noisily, sharpening his knives, but we learn that he rejects killing people, which I love as a character concept.) This scene with Phaedra links us to the present, for Phaedra is in captivity, held by Baroness Bizarre. The Baroness, a new one and not the original, is ready to attack Earth, or at least New York.

And all that stands between her and success is Claire and Gentleman Jim. Jim has a spell he can use to try to capture her; Claire just needs to keep her occupied long enough that he can finish it. Some illusions of the rest of the team help, but maybe too well. The Baroness splits up her forces, and nightmares run rampant through New York in a glorious montage that briefly introduces us to a swarm of villains. Then one of the HQ’s security guards activates and the Baroness’ goons turn into bugs and swarm away.

We get another glimpse of the past. Last time we learned that Gentleman Jim saved the world by casting a spell that caused everyone to forget about them all. To help keep Phaedra from become entirely forgotten, he trapped her in a glass sphere, the sphere that fell into the Undervoid. She may have been imprisoned, but Phaedra realized she could still sneak back into the real world for short periods, so she did so, keeping their memories alive in books and hiding information in libraries. And it worked, at least for Claire and Tommy. And in the present day world, Phaedra returns, free from her imprisoning sphere.

But is she too late? The Baroness laughs and points out that Abbathexiddion has arrived. As Phaedra approaches the Baroness and offers…to protect her, Claire’s family arrives at the skyscraper. Where family is concerned, they do not hesitate. Phaedra’s mercy banishes the Baroness, and Claire’s astonished family reaches the upper floor of the building. Gentleman Jim and Phaedra fade out, but Claire, as the new Adventureman, has an idea…

WHERE PAST MEETS PRESENT

The art of Adventureman #5 is simply gorgeous. Everyone has a tremendous amount of expression and character from the subtlety of a raised eyebrow from Phaedra to Claire’s desperate portrayal of confidence. As the fight rages on, we get to see Claire having some fun with it. There is a point where the Baroness flies in toward her, and rather than attacking her directly, Claire breaks the support column she was casually leaning against. When burying the Baroness under rubble works, Claire’s smile is luminous.

Even though we are well into the overall story, there is still a big plot with a lot of pieces to explain. I really love the scenes showing what Phaedra has been up to all this time. Until now, all we have really known about her is that she is mostly trapped. It is rewarding and delightful to see her outwitting her enemies, sneaking into the real world, and planting clues. It’s a great payoff that links back to the very start when Claire and Tommy voraciously read all the Adventureman books they can find.

Adventureman #5 tidily cleans up the cliffhanger from issue #4, but the world has become a bigger place, and Claire has big ideas about what it means to be Adventureman. It looks like the start of a whole bunch of new excitement is just around the corner.

Adventureman lives, and the world will never be the same again!