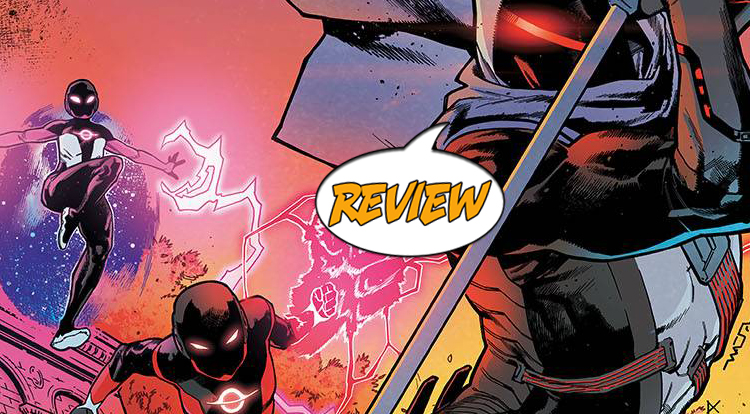 Turns out Radiant Black isn’t the only new superhuman around, and not all of them are friendlies.  Your Major Spoilers review of Radiant Black #8 from Image Comics awaits!

Previously in Radiant Black:  The battle for the Radiants tears through Chicago.  Can this unlikely new team stand against an enemy who knows more about their powers than they do?  And even if they win… what happens next?

Radiant Black #8 opens with a brief flashback, as we see the cosmic swordsman <001> (who nearly killed all four of the Radiants last issue) escaping the explosion of some sort of spacecraft or station.  When we cut forward to the present, the Black and Pink Radiants are stranded in Moscow, with Pink overwhelmed by the effort it took to teleport them.  While they try to blend in with with the various Muscovites, Red and Yellow interrogate <001>, trying to get some sort of answers from the alien before he reveals that he charges his armor from their powers… like the telekinetic field that Red is using to hold him.  Back in Russia, Marshall steals some coffee for his new partner, and they discuss their real lives, only to get interrupted by the actual owners of their drinks.  By that point, Radiant Pink is able to teleport them back, allowing all four of them to square off with their foe…

…and then, as usual for this book, something COMPLETELY unexpected happens.

The moment that ends the fight is a shocker, but it’s followed by the best bit of the book for me, as Radiant Yellow basically slaps Marshall/Radiant Black in the back of the head and tells him to get over whatever his issues are with Red.  It’s a moment that would fit in a traditional team book narrative, but it feels fresh and interesting in this non-team moment.  The art in this issue is truly lovely, combining clean lines with a varied and inspired color palette, especially as used on the armors and constructs of the Radiants and <001>.  There’s also an inventive use of a blurred and distorted font for the alien’s speech, with occasional static to obscure his meaning, and I can almost hear the “alien voice” that it’s conveying.  That’s impressive work alone, but added to the high-speed pacing of the story and the excellence of the art, it’s the perfect cherry on top of an entertaining comic book sundae.

My reading issue #1 was entirely by accident, but I’ve loved every issue of this book ever since, and this one is no exception.  Radiant Black #8 is once again surprising, entertaining and excellently crafted, with art and coloring that provide a killer visual one-two punch and enough surprised and human moments in the story that it doesn’t get swept away by the strength of the pictures, earning 4.5 out of 5 stars overall.  If you’ve been on the fence about this book, take my word for it: You won’t regret picking this one up.

Every issue of this book ups the ante in ways that I never expected, and I really enjoy being surprised.