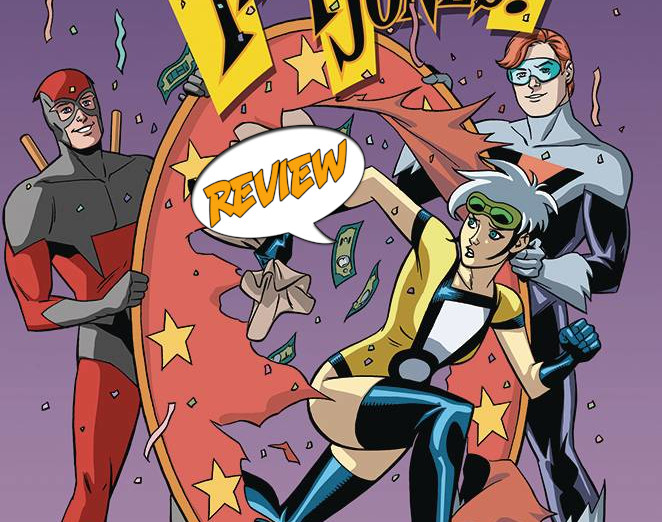 The impossible happens when a thief suddenly gets superpowers! How will Belle use her newfound abilities? Find out in Impossible Jones #1 by Scout Comics! Previously in Impossible Jones: Check out the new origin story of Scout Comic’s newest “hero.” Find out what happens when Belle gets powers, is mistaken as a hero, and has no intention of giving up her criminal ways!

A NEW KIND OF HERO

Impossible Jones #1 starts in the middle of a crime. Holly Daze is escaping with stolen jewelry. Using her Christmas persona, she begins to do holiday after holiday pun until Impossible Jones shows up to thwart them. Using her ability to stretch, she dispatches the goonies and fights Holly Daze despite Holly having a bag of tricks. After the fight, Impossible Jones decides to let her go and take the stolen goods for herself!

The comic shifts back to Impossible Jones origin story. Belle and her crew went in to steal some tech. When her crew leaves, she finds herself left behind and in the middle of a quantum generator. She tries to escape but ends up damaging the generator and causing a huge explosion. This catches the attention of three superheroes who goes and investigates. Belle, who realizes she now has powers, swears payback on the people who left her in the generator! Little does she know; she has caught the attention of people who may be upset about the explosion.

I really enjoyed the presentation of Impossible Jones #1. It reads a little gimmicky, but it is never over the top that it makes you want to groan. The action is fun and lighthearted but there is a surprising level of depth to Belle. Like her decision to let Holly Daze go has a fair amount of nuance that surprised me for something that feels targeted to a younger reader. This is a story I want to introduce to my daughter because there is something to talk about and think through.

But beyond that, Impossible Jones #1 seems to be turning into a story about the consequences of one’s actions. Belle seems to simply be doing things instead of thinking through them and that is going to get her in trouble. I’m interested to see if she can learn that lesson, but I admit that the story may go a different direction. Regardless, I enjoy the story and the art, and the creative team did a tremendous job.

Impossible Jones #1 was a great start to a cool miniseries. Belle proves to be an engaging protagonist that has a fair amount of nuance. This is a 4 out of 5 for me and something I would proudly give to my daughter or another family member if they are looking for a new comic to read.

Impossible Jones #1 is a solid new series that introduces us to a nuanced protagonist.