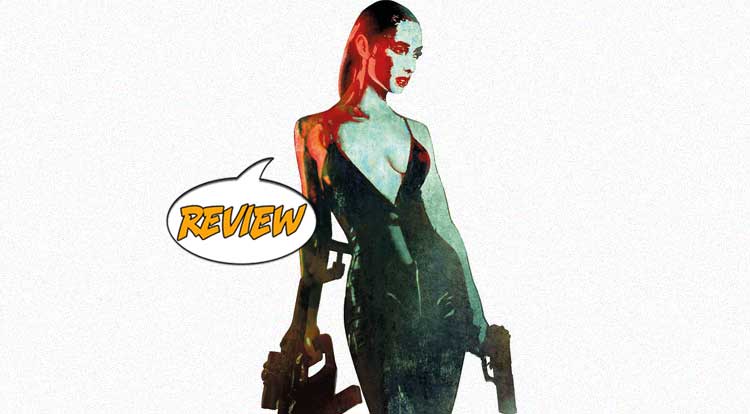 Previously in Gun Honey: When a gun smuggled into a high-security prison leads to the death of dozens and the escape of a brutal criminal, notorious weapons smuggler Joanna Tan is enlisted by the U.S. government: Find the man she set loose and bring him down!

Gun Honey #1 opens on the yacht of a truly skeevy Greek millionaire type, as he scans the nearby beaches for another conquest.  He spies a beautiful young woman, makes a racist remark, and insists that she be brought onboard, only for his would-be lady friend,  Joanna Tan, to slip into the restroom and assemble a gun out of her bikini.  (For bonus points, the initial double-page spread of her lying on the beach features all the parts of the makeshift weapon clearly, through readers may be distracted by the amount of skin on display.)  Gianakouros is killed, she swims away and makes her way home, where she finds an agent waiting for her.  She is taken to his boss, who offers her a deal: Work for them to take down the very people she’s been selling guns to.  Joanna tells them no, but there’s clearly some questions in her head about whether or not she can live with the things that she’s done…  That’s when she sets off on an assassination mission.

SHE DOESN’T SHOOT BEES *OR* HONEY

The beginning of this issue made me very uncomfortable, not just with the super-sexy objectification of our protagonist, but how Gianakouros refers to her as “the yellowtail.”  Yes, it’s racism to underline what a terrible villain he is, but there’s just something creepy about it.  That said, the beach shots are well-drawn, as are the scenes with the undefined government agents, showing off Joanna’s impressive cleavage, even if there’s something about it that I’m not comfortable with.  The action sequences are also well done, and there is a subtlety to the “acting” of the character’s faces throughout the issue, so I can get past the sexiness (especially in the Hard Case imprint).  The story gives us a quick thumbnail of Joanna/Gun Honey’s background and origins, all of which are intriguing and make me want to read more of this comic.

There are some parts of Gun Honey #1 that aren’t to my taste, but that’s not to say that it’s not a good comic book, especially given the strong art and the building of an interesting protagonist about whom I want to read more, earning 3.5 out of 5 stars overall.  As first issues go, it’s a good one.

There are some moments here that make me uncomfortable but it's an interesting start for a character that I'm interested in seeing more of.