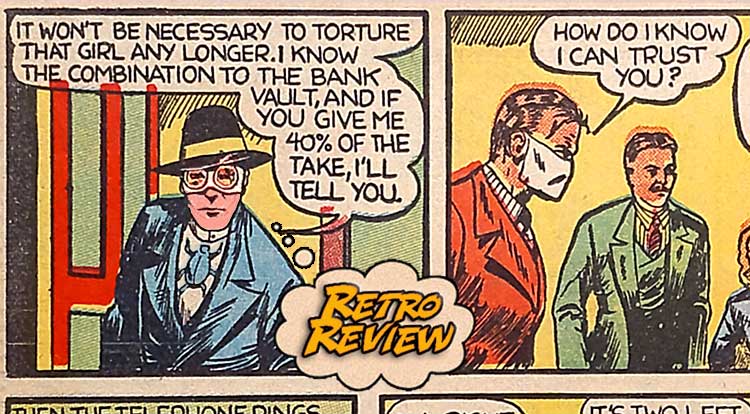 We all know the Blue Beetle, with his goggled, scarab-derived powers, and/or flying bug… but eighty years ago, things were a little bit different for our favorite cerulean insect hero.  Your Major Spoilers (Retro) Review of Mystery Men Comics #1 awaits! Previously in Mystery Men Comics:  Victor Fox entered the comics business with a splash: He got immediately sued by National Periodical Publications (one of the companies that would become modern DC Comics) for his first comic book, Wonder Comics #1.  That comic, which got the Retro Review treatment nearly a decade ago, featured Wonder Man, who was legally deemed too similar to National’s big star, Superman.  It was only a few weeks later when today’s comic hit the stands, featuring The Green Mask, Rex Dexter of Mars, and Captain Danny Scott of the Bengal Lancers.   There’s even the first professional work of George Tuska on a strip called Zanzibar, about a Mandrake-style magician detective.  It also features the debut of a character still in circulation today…  The Blue Beetle!

Of course, the cover of this issue might have you believe this is Blue Beetle. From the placement of the copy, it’d be easy to presume that this snappy dresser is Blue Beetle, but in fact, he is a mis-colored Green Mask, one of Fox’s other signature heroes and the star of the first story in this issue.  (Strictly speaking, he’s ONE of the Green Masks, but that’s another Retro Review.)  It’s not until the ELEVENTH story in this issue that we meet the hero who makes people pay twenty grand for this comic…  The Blue Beetle! The artist for this issue, Charles Nicholas is actually a house synonym used by several artists who worked for Eisner & Iger Studios, among them Jack Kirby.  This Charles Nicholas is actually Charles Wojtkoski, whose career was long and storied, but who is best known for creating Blue Beetle.  The story, tentatively credited to Will Eisner, introduces us to Dan Garret, beat cop, who nearly gets killed in the very first panel. Hearing that the White Face Gang was behind his near murder (and the ACTUAL murder of banker Mister Vander, Garret does some impressive detective work and tracks down the killers.  It’s interesting that this story strongly implies that it’s not his first outing in the blue business suit and hat of Blue Beetle, as evidenced by several bits of dialogue and the thug’s fear at seeing his trademark bug scuttling through their lair. It’s also fun to see that Dan’s gear includes a cell phone several decades early, and that the criminals see him as a threat not for busting their rackets, but taking it over!  The reason behind this is quite simple: This first appearance gives us a Blue Beetle who is a clear and obvious knockoff of The Green Hornet, whose adventures had been serialized on the Dumont Network for more than a year.  (The Hornet’s first comic book appearance wouldn’t come until late 1940.)  Indeed, other than lacking a chauffeur/sidekick, Blue Beetle’s first adventure reads just like a Green Hornet story, right up to the point where the villains realize they’ve been had and set out to murder the hero. He even has gas weaponry, a cornerstone of Britt Reid’s Hornet arsenal, while the police want to put him in jail.  It’s a remarkably short story, only a few pages, but it establishes a status quo that the character would never again use or refer to, as issue #2 debuts his blue chainmail look, eventually gaining super-powers from vitamin 2X but Mystery Men #13.  As for Mystery Men Comics #1, it’s a bit of a mixed bag, with the well-crafted writing that Eisner/Iger comics are known for and some pretty okay art throughout the issue, balancing out to a right-down-the-middle 2,5 out of 5 stars overall.  In time, street cop Dan Garret begat the super-powered archaeologist Dan Garrett (though it’s unclear whether Charlton Comics actually legally obtained the rights to the character) who then begat Ted Kord, who was sold to DC Comics in the ’80s, which brings us to modern BB, Jaime Reyes.

Of course, if you want really complex back story, ask me about the various iterations of The Shield.

As Golden Age anthologies go, it's not that bad, with only two cringeworthy moments, one racist caricature and a bunch of features from Eisner and Iger. Blue Beetle is the only thing here that outlasted the '50s, but it's a funny little collection.