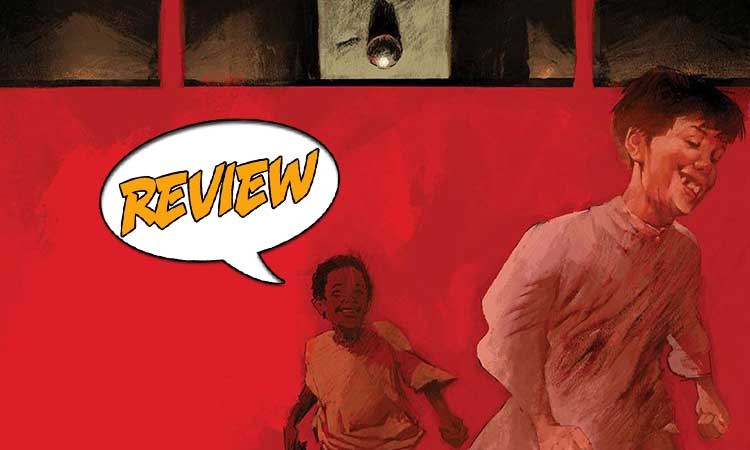 Magical help and even godly powers can only help so much. Does Jimmy have what it takes to regain his own humanity? Find out in Killadelphia #17 from Image Comics!

Previously in Killadelphia:  Jefferson and Jupiter meet face to face for the first time in decades. They fight; they talk; Jefferson admits to being wrong about slavery. They become friends again, or at least allies, and Jupiter takes him to see Abigail. SeeSaw finds Anansi and asks him to come to Philadelphia. Anansi has made a couple trips to America and demands to know why he would want to help a country that couldn’t care less for him. SeeSaw shares his sense of hope, and Anansi agrees to help him. They return to James Sangster’s apartment where practically everyone is a vampire, and Anansi demands to know who he should be blasting. They make quick work of Abigail’s vampires and Anansi tries to understand why, among everyone here, the only vampire they want returned to human is Jimmy.

It would be easy to read Killadelphia #17 and come away thinking that the theme is that politicians are, and always have been, blood-sucking monsters. But when you really look at it, it is much more complicated. In fact, maybe we all vulnerable to becoming blood-sucking monsters; there isn’t an outside force that will ride in to save us; and maybe we need to take a good, hard look at ourselves.

The book opens with Brianna looking out over the city and comparing the fight with what she remembers of the Civil War where there was some sense of honor along with the death. SeeSaw comes in. She is happy to see him but is also troubled. She wanted to become human again because, as a vampire, she felt she was missing something. Now she knows she was missing love, affection, but in this world, she has not found it as a human either. SeeSaw cannot help her directly, not right now, but he wants some of her blood.

As Jose and James worry about Jimmy, James shares with her the dysfunction in their family. His own father was abusive, and James hated him. Even after his father’s death, he carried that hurt with him. The anger and pain he felt as a child he, in turn, passed on to his son. Now he realizes it; now he regrets it.

SeeSaw gives Brianna’s blood to Jimmy. Anansi and Jimmy both wonder about this, but SeeSaw explains that Brianna’s blood has a lot of human qualities and is low on dark energy. Taking it could be like building antibodies against a disease. But it is also going to take Jimmy within himself, and he must figure out on his own whether he comes back as human or not.

As James recounts his story, Anansi talks with SeeSaw about the metaphysics of eternal souls vs. tangible bodies. By being part of the tangible world, humans lose their connection with the eternal and become subject to fear, resulting in cruelty and conflict. On a grand metascale, this parallels the conflict in the Sangsters’ lives. But then the story takes this conflict and reduces it in yet another parallel and Jimmy comes face to face with himself – his own sense of failure, his insecurity, his doubt.

But by facing off with fear, accepting it, trying to move beyond it, maybe this could be the first step in understanding what is truly at stake.

As it has been before, the art of Killadelphia #17 is assertive and gritty. Even while we know the scale of conflict that is ongoing all around them, we share intimate moments with James, with Jimmy. Their inner demons are not only laid bare but are brought to life in the art. The image of James’ father yelling at him is an angry caricature of a parent, all anger and mostly mouth, the impression that a child absorbs. And he sees this reflected on his own face with his own son. Raw and evocative, it cuts straight to the emotion.

But there is strength to be found in these pages too. Jimmy confronts himself, and it is the human Jimmy facing off against the vampire Jimmy. At first the fight is purely physical with the human being desperate and the vampire relishing his desperation. But, like the movie War Games told us so many years ago, “The only way to win is not to play.”

Killadelphia #17, believe it or not, takes the existing conflict and raises the ante even further. It is not only a horror story, it is philosophy, it is social commentary, and throughout all of this there is a still a silver thread of hope. It is magnificent.

Does it all come down to fear and how we each choose to deal with it?