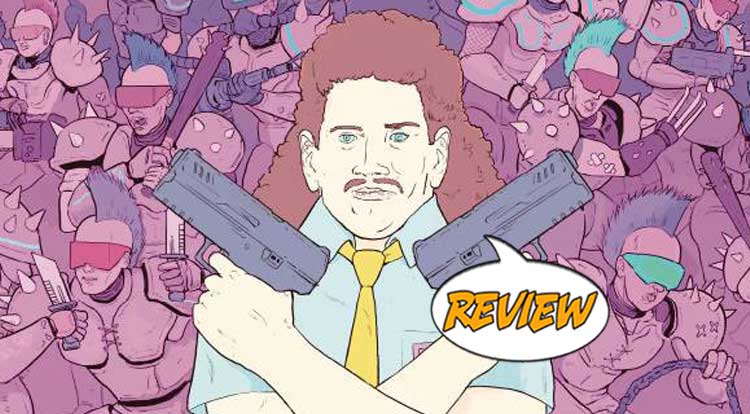 It is the year 2099, and strange things are afoot at the Megamall 4472-158’s food court.  Your Major Spoilers review of Mullet Cop #1 from Scout Comics awaits! Previously in Mullet Cop:  After a near-death experience, a mall cop goes undercover as a manager at an all-you-can-eat buffet.  With the help of his coworkers and a supercomputer/microwave called M.I.T.T. (Mall Industries Two Thousand), he takes on crime boss Robogrannie and her gang of thugs!

After the Robo-Mutant war ravaged the planet Earth, humanity has rebuilt itself into a new configuration: Huge shopping centers known as Megamalls have covered the land, and the population has gotten used to living in a hybrid of The Running Man and Judge Dredd, fighting off roaming hordes of cyborgs.  Megamall 4472-158 is under siege by The Pink Dolls, leading to a conflict that leaves Mall Police officer Fred in coma, only saved from doom by the metal plate in his head.  When he awakens, he finds that he has a new hairstyle (to keep him from being recognized) and a new job, running a buffet.  Of course, his team includes a cyborg, a ninja, a super-computer built into a microwave, and Dolores.  (Dolores is just Dolores.)  Things immediately get weird, as Mullet Cop is forced to face down the same Pink Dolls who nearly killed him, leading to a series of chases and exciting battles through the abandoned levels of the mall, forcing Fred to prove whether or not one man can make a difference.

First off, this is a triple-sized comic book, featuring sixty-plus pages of story, so it’s got a higher price tag than most books, so readers will have to decide if eight dollars for a comic is out of the question for them.  The story presented is expansive and interesting, constantly building in a matter-of-fact manner, adding complexity and bits and pieces that we didn’t know about, like the reveal that food court worker Ms. Parker is now a cyborg who can fire lasers from her eyes.  The art is intentionally stylized, reminding me of the grotesqueries of Beavis & Butthead or the Adult Swim late-night cartoons of the 2010s.  The cultural touchstones of the story (Robocop, Death Race 2000, Liquid Television, the aforementioned Running Man, among others, are aimed directly at my generation of readers, which may lead to questions of how accessible the book is to a younger audience.  There’s also a distinct lack of tension in the story, with every new development being greeted with blank calm from Fred, a decision that seems designed to make it clear he’s unflappable, but also causes a disconnect from the story.  The art is also likely an acquired taste, but I can see fans who grew up on Rick & Morty or Squidbillies having no problem accepting it.

All in all, the tone of Mullet Cop #1 is easily discerned from the title of the book and while there are some slow spots to be had, the story moves at a brisk pace and ends up being subversively entertaining, with art that can convey the mundanity of a mall, and a multi-story ballet with pink cyborgs on motorcycles with equal skill, making for a better than average 3.5 out of 5 stars overall.  It isn’t going to be to everyone’s tastes, but if you’re in the audience that enjoys absurdity, adventure and references to Knight Rider, it should be right up your alley

A muted color palette and distinctive art make for a visually interesting read, while the story makes itself work in spite of the overwhelming weight of our suspension of disbelief.