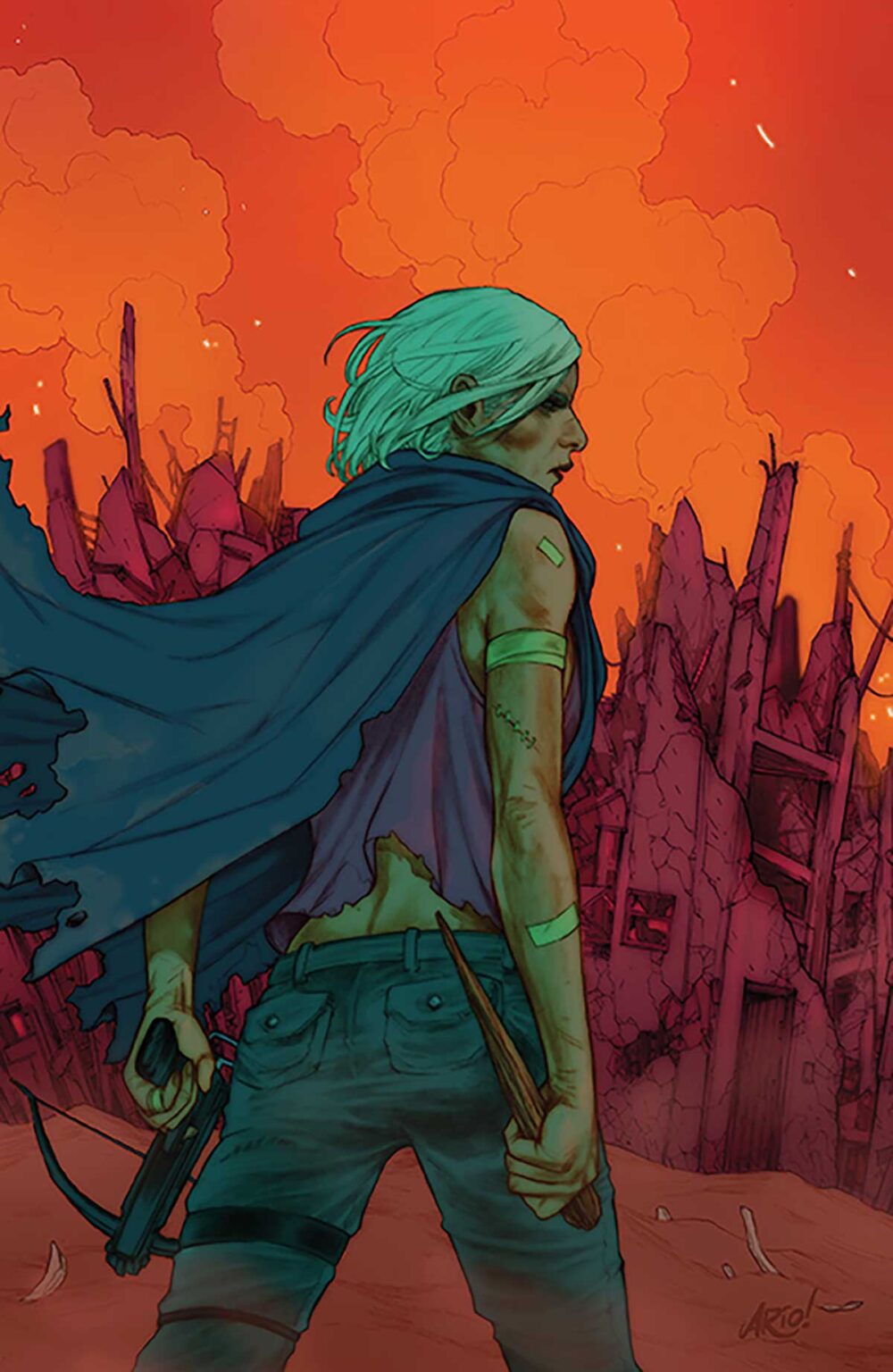 Toba and his mother, a renowned scientist, have just immigrated to the US. But instead of living in the Big City like Toba always dreamed, they’ve moved to a sleepy little town in the Pacific Northwest called BUCKHEAD.

In the middle of the picturesque and pedestrian town, Toba discovers that things aren’t as perfect as they seem…

Toba and his newfound friends find a strange video game, a perfect replica of the town and its people. Soon Toba is on the run from men in black, with his friends brainwashed by microchips.

An astonishing new series from Shobo Coker (Outcasts of Jupiter) and George Kambadais (The Black Ghost) perfect for fans of Eve and Home Sick Pilots!

Buffy Summers is the last Slayer. Now in her 50s, she wages a one woman fight against the forces of darkness, who prey on humanity in the daylight unimpeded thanks to a magical catastrophe that has nearly blotted out the sun.

The same disaster robbed Buffy of her friends and ended the Slayer-line, forcing her into an endless guerilla war. That is, until she stumbles across something she hasn’t seen in a long time – hope, in the form of a prophecy and the young girl who carries it.

With team members out of commission, the Slayers divise a final plan to take care of Silas once and for all in this third chapter of We Are The Slayer.

But what side will Ethan be on? And what role does Cordelia have to play? And most importantly, will Buffy’s master plan from across the Multiverse succeed!?

A beloved character returns as the Ghost of Firefly Past, while a fellow crew member guides Jayne through the here and now, showing the consequences of his actions in the present.

But it’s the Ghost of Firefly Future, Emma Washburne, who reveals the most shocking fate of all. Can Jayne turn over a new leaf and avert the disaster headed his way? It’s been 20 years since the original crew of the Serenity was busy smuggling contraband, ferrying travelers, and having close calls with the Alliance. Now, they’ve all gone their separate ways.

Zoë Washburne and her daughter, Emma find themselves at the helm of the Serenity, and they must cobble together a new crew of castaways and misfits to navigate this brand new ‘Verse.

But…there’s a world-shattering discovery beyond the Rim. Together they will face new challenges, reunite with old friends, and try to build new relationships. But most of all—a new future from a troubled past. Meanwhile, the Washbot tries to find his place and role in this new world separate from his borrowed identity as a duplicate of Wash.

In the midst of problems and imperfections, there’s hope on the horizon.

But when an unexpected event throws everything into chaos, will this be a new start… or the beginning of the end?

With [REDACTED] headed their way, the only way to save the multiverse is to make a dangerous alliance with death!

Will their veritable array of powers hold off the teeming dead and lead the true threat into their trap?

So while Paul Atreides meets his destiny in battle, Sgt. Vitt uses his family’s gift of storytelling as a Jongleur to transport his men from their tomb to their homeworld of Caladan.

Can Vitt mentally transport them back to the lushness and vast oceans of Caladan and give them the gift of hope in the darkness?

But with Lord Zedd at their back and the Eltarian Supreme Leader gathering his forces to launch a massive attack on the Earth, can the Rangers survive being surrounded on all sides? With information gathered from Zordon and the Blue Emissary, our motley crew of heroes and villains set their sights on defeating the minions of their former ally and conducting a rescue mission.

But in a galaxy full of enemies, who… or what… awaits their rescue? The only problem is now they have to kidnap… and kill him, which wasn’t part of the deal.

As Lee makes his way downtown, the unlucky four find themselves in a chase into Dallas. What happens if they catch Sonny, and what does it mean for Lee’s plans on the fateful day, November 22, 1963? Triggering a memory of WWI, where B. fights alongside his first U.S. handler, an artillery shell explosion results in a piece of B. making its way through history as a legendary artifact.

Back in the present, Caldwell reunites B. with his artifact, revealing himself as the top historical expert on

B. Will his proposed “Protocol X” unlock the ultimate truth B. seeks, buried deep inside his memories?

Then, in the present-day, Aaron finally comes face-to-face with the monster that he’s been tracking…which is much more powerful than expected.

Meanwhile, Regan is hesitant to tell Hannah about the prophecy, but before she can, she’s overwhelmed by auditory pain, and Hannah hears a hauntingly familiar voice as she tries to help Regan…

But freeing his loved ones won’t be enough. He’ll need to make a desperate attempt to ensure that no one else ever goes through what he has, though it may cost everything… Retail Price: $17.99 Writer: Victor LaValle Artist: Jo Mi-Gyeong Cover Artist: Ario Anindito Synopsis:
When the ice caps melted, most of humanity was lost to the hidden disease that was released. Now, a mysterious girl named Eve has awoken in secret and must deal with a world that’s nothing like the virtual reality of her upbringing.

Accompanied only by Wexler, her robotic caretaker and protector sheathed in her favorite teddy bear, Eve must embark on a deadly quest across the country to save her father.

Along the way, she will not only contend with the threats of a very real world that await her, but the lies we tell our children in the name of protecting them.

In the spirit of his critically acclaimed and award winning novel The Changeling, novelist Victor LaValle (The Ballad of Black Tom, Victor LaValle’s Destroyer) and illustrator Jo Mi-Gyeong (The Dark Crystal: Age of Resistance) deliver a powerful dystopian adventure about the world we leave behind…and the price of restoring life to a dying planet. As Marion’s monstrous transformation nears its completion, she decides to take matters into her own hands and sets her sights on those who wronged her and her sister. Too bad saying no isn’t an option if she wants to get out of Crestfall Bluffs in one piece!

With the horrible truth fully revealed, can Joey escape a proposal much too rich for her blood, or will she get eaten alive by the secrets of the rich and powerful? Meanwhile, Duncan must find another living legend. But are they an ally…or another monster to defeat? As they journey towards the Inner Worlds with the threat of war on the horizon, will Jason or Oneday seize control? And when Wynd is captured and taken to the Faeries’ hidden capital deep in the Weird Woods, his friends must rescue him before he’s put on trial… and Basil, Titus, and Ash unknowingly lead an even greater threat to the Faerie City – Vampyres!

The GLAAD Award-winning team of writer James Tynion IV ( Batman, Something is Killing the Children) and artist Michael Dialynas (Teenage Mutant Ninja Turtles) continue their hit young adult fantasy series about learning to spread your wings no matter the dangers life puts in your way.

Even in a negative funk the next day after seeing footage of her lack of skating skills, she notices Scarlett, one of the Rollers, being mean and not acting like herself. Scarlett is infected by a Negatrix!

Dizzy and her friends devise a plan to free Scarlett from the Negatrix influence, but are the Negatrixes only scared off…and still out there somewhere? Gloria has always used determination, bravery, and understanding to build relationships and overcome strife in her friendships with monsters and witches, but how will she handle the discovery that the witch she befriended might not be such a great friend after all?