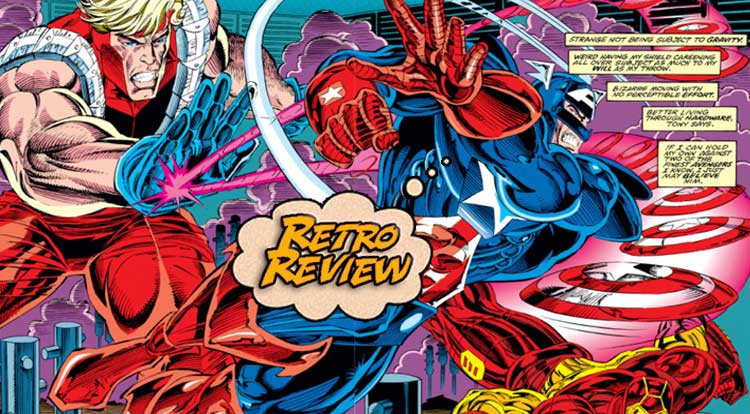 Some would have you believe this is the lowest point in Captain America’s career…  but now we find out for sure!  Your Major Spoilers (Retro) Review of Captain America #438 awaits! Previously in Captain America: After years of fighting the good fight, the Super Soldier serum that gives Steve Rogers his peak human abilities has finally begun to break down, causing his body to break down with it.  With his own body betraying him, Cap continued to adventure, but he eventually fell into a coma.  In order to save him, Iron Man made a journey into his subconscious, while Giant-Man worked to heal his failing body.  Their gambit was successful, bringing Captain America back from the brink of death… but leaving him paralyzed!

Fortunately, Iron Man’s got a little something to fix that. After the implantation of bio-chips (similar to the ones Tony used when he was briefly paralyzed), Cap’s beleaguered neuro-muscular systems are given a new, albeit temporary, lease on life, allowing Tony to finish off with a Tony Stark flourish: Cap’s very own Iron Man-style armor.  Even so, Steve Rogers has a lot to do and sets off to take care of his unfinished business, starting with Flag-Smasher.

Unfortunately for Captain America, the leader of U.L.T.I.M.A.T.U.M. has the same idea. Flag-Smasher’s first strike includes striking against Captain America’s network of hackers and informants, capturing Gavin, a key member of that unit.  The build-up of his grassroots network to find problems requiring his attention had been key to the last few years of Captain America’s adventures, making it a pretty brilliant strike by the anarchist villain.  Once they shoot down his personal transport (carrying Jack Flag, Free Spirit and his personal pilot, Moonhunter), Captain America vows to take them out, while he still can. Honestly, the art isn’t to my liking (like many Marvel comics of the era, it was consciously and intentionally trying to ape the work of Image Comics, specifically McFarlane) but Hoover’s work isn’t a train-wreck.  I actually find the design of the Cap armor to be interesting, and I like the touches that make it clear that Tony just repurposed some of his own stuff.  That said, seeing Captain America flying into battle does feel odd, even if he’s very effective against the forces of U.L.T.I.M.A.T.U.M.  What I find less forgivable is the way he deals with Flag-Smasher’s explosive last line of defense…

He lets him explode. After leaving a cadre of men to die (admittedly, by their own evil acts), Cap decides that he has to come clean to his allies, gathering friends and associates to let them know that he’s dying. The issue’s final emotional beat, with Arnie Roth admitting that he, too, is suffering from a fatal disease, works, up to a point.  But having it relegated to the last three panels robs it of some of it’s emotional power, especially given the issue’s use of a big two-page spread to reveal the new star-spangled steel pants, making me question what the creative team has chosen to focus on.  Either way, Captain American #438 isn’t as bad as its legend might have you believe, with some strong emotional beats that sort of work, art that tries to hard to be what it isn’t while underplaying what it is, and an overall grade of 2 out of 5 stars overall.  The basic premise has legs, in an over-the-top ’90s ‘Death of Superman’ way, but this comic book’s biggest weakness is actually the identity crisis of Marvel editorial during this era.

Gruenwald has all the right pieces assembled, but I'm not thrilled about the way they're presented, and Hoover's art, while okay, is JUST okay.