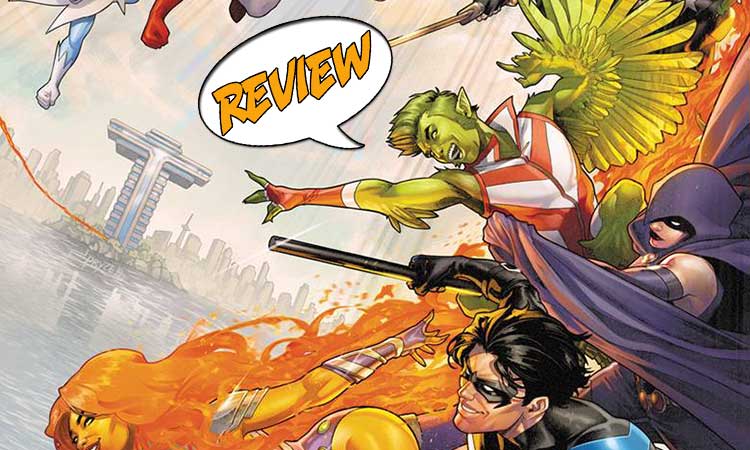 Have no fear, The Titans are here to save the day.  That is, until their powers start to get used against them.  Your Major Spoilers review of Titans United #1 from DC Comics, awaits! Previously in Titans United: The Titans face their greatest challenge-their own powers! Nightwing, Donna Troy, Superboy, Starfire, Raven, Beast Boy, and Red Hood kick off a thrilling new case that will lead one of their own to question not only their place on the team, but their very existence.

Titans United #1 opens on a street where a man is suddenly afflicted with pain in his eyes which turns into laser vison. Thankfully The Titans arrive on the scene before anyone who was immediately around him was injured.  Part of the team then sets out trying to subdue the man and get him the help he needs, while the other part of the team goes out to help the people in the area.  While trying to help someone falling out of a window Superboy notices his powers starting to wane.  Elsewhere the man who previously had laser vision is now able to turn into animals and he and Beast Boy tangle with each other.  Eventually though he begins to be able to fire sun beams out which injures Gar and it becomes clear that he can’t control the power.  Eventually it gets to the point where he is going to explode.  Superboy arrives and flies him up into the sky away from the city where the man explodes.  In the aftermath Superboy finds himself in the infirmary with a broken arm.  The team argues amongst themselves for a bit before getting a call from Hawk and Dove, who have their handful with a d-tier villain punching well above their weight.

Titans United #1 isn’t a very deep book.  In fact, there isn’t much plot at all.  What we get here is one long action sequence, with every member of the team having something to do.  There’s some banter, and some flirting, and some innuendo, but that’s all secondary to the situation at hand. And here’s the thing, the action is done pretty well.  Seeing a lion and a gorilla (both green) fight is fun.  Seeing Red Hood use a grappling hook to catch a falling Superboy and then rescue some civilians is also fun.  It’s basically a popcorn flick of a comic, all the way up until the last few pages.  This is where the issue shows some flaws, particularly during the argument between Superboy and Jason Todd.  While he’s been written in the past as being a bit of a jerk, the way that he come after Conner, is so unnecessary and out of left field that it comes off as a bit of cheap drama tossed in to give the issue some substance.  It’s a shame too, because the rest of the issue is alright. Its clear there’s going to be more going on here, but they didn’t try and push a big story upfront, rather allowing the action to play out and letting the rest come later. It was the right balance.

WORKING WITH WHAT THEY GOT

If you’re coming to this title hoping for some expressive, unique, and innovative art, I got some bad news for you. That’s not to say it’s bad by any means, in fact, what it lacks in style it more than makes up for in being legible and effectively showing the action, which is an underappreciated skill.  One thing though that struck me while reading Titans United #1, was just how many light skinned people with black hair there are on this team.  I give the artist credit for finding ways to distinguish them all in various ways, but there’s no getting around that there’s a similarity with a lot of these characters features.

BOTTOM LINE: COME FOR THE ACTION AND THAT’S ABOUT IT

Titans United #1 is a pretty typical comic book.  It has some fighting, it has some heroics, it has some drama, and it has some sexual tension, which is honestly just fine sometimes.  What it doesn’t have though is enough of a hook to set this apart from any other comic out there.  So unless you have a particular fondness for these characters, this is going to be a pretty average comic.  3 out of 5 stars.

If you’re looking for some simple comic book action, you could do far worse than Titans United #1, just don’t expect much after that. Strange character interactions dampen any attempt to elevate this issue.