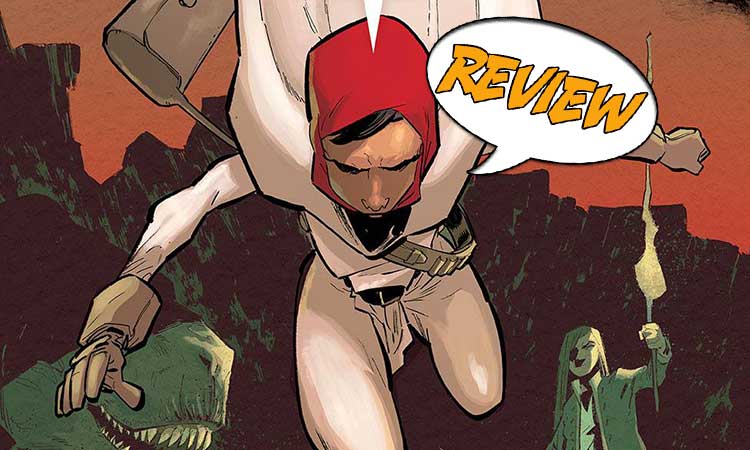 In the Barrow of Annwn, Shahi and Ling join forces to find the Cauldron and face off against its guardian! Can they get the Cauldron and keep it out of the hands of Margul Khan? Find out in Compass: The Cauldron of Eternal Life #4 from Image Comics! COMPASS: THE CAULDRON OF ETERNAL LIFE #4

Previously in Compass: The Cauldron of Eternal Life: All is not well in Wales. Shahi is granted entrance to the Barrow of Annwn by the Druids. Her friend and rival, Ling, is thrown into a mine leading to the Barrow by Margul Shadgur’s men. Shahi is judged by the ghosts of those she has killed and is found unworthy to see the Dragon. Her sight is taken from her. Ling finds monstrous creatures in a cave that now seems too impossibly huge and dangerous. The two of them meet – and neither has found the Cauldron.

Compass: The Cauldron of Eternal Life #3 opens deep in the Barrow of Annwn where, we are reminded, the Cauldron of Rebirth is located. It is guarded by a dragon, or more magnificently, a dinosaur who has presumably been granted eternal life by the Cauldron. It comes across the cave bear from last issue impaled on a spine of rock.

Meanwhile, Shahi and Ling are suspended from a stone outcrop on opposite ends of a rope. The rivals become allies again, at least for the moment, and Shahi suggests that they work to spin the rope around itself, reinforcing it, and then use it to climb up. Ling has an injured arm, so Shahi makes the climb and then hauls Ling up. Below them, the bear growls, still alive. Shahi figures out that “Eternal life,” goes back a very long way.

She also confronts Ling about working for Margul Khan and insinuates she has sold herself out. Ling admits that her father is a hostage under Margul Khan, and his life depends on Ling’s service. Shahi admonishes her that she should have asked for help, that the two of them could have figured something out. Ling mocks her about her local allies, knowing that the Khan has brought a considerable army. As she tells about their crossing of Europe, we see the current fight between Ednyfed and his men against the Khan’s forces.

Shahi admits that, while she is blind, she is able to see leylines and through them, where the Cauldron is. She never wanted to steal the Cauldron, but Ling’s story has made her determined to keep it from falling into the Khan’s hands. She also wants to help Ling, who is equally determined to refuse her and go her own way.

They hear a thunderously loud noise. They’ve seen the cave bear; Ling saw the giant spider. They wonder what else has been living in this cave for so many years. And then it appears, the guardian of the Cauldron, the beast who has lived here forever – the dinosaur. I love that it is a dinosaur. It gives a sense of realism to the story of a dragon and it is terrifying in its own right. It menaces them and Shahi comes up with a clever way to at least stun it for a while.

They fall into the water below. Shahi recovers her sight. The water itself here seems to heal. But they have reached the Cauldron – and it is too big to carry. How will they get the cauldron out of the cave system?

MAKING THE PAST VIVID

The art of Compass: The Cauldron of Eternal Life #4 is really fun. We see a glimpse of the dinosaur early on, just enough to wonder whether it is a dragon, but gosh it looks like a dinosaur. All alone, we can’t really tell what the scale is. Later, when the young women hear it, the sound effects tell us that it is really big. Imagine being in a cave in the dark and hearing something like that approaching. That is the sensation of foreboding we get just before it appears in all of its malevolent glory. It even has a ridge of feathers down its back. It is a wonderful segment.

The lull between actions scenes is used to develop more of the backstory between Shahi and Ling. They’re both strong, independent women in a time period where few options were open to them. They’re both stubborn and determined. But they are entirely different individuals. I like seeing them able to arrange a détente at least for the moment. Like two old friends, they are open with each other, and we see that in their faces. They know each other well, and they do not always agree.

Compass: The Cauldron of Eternal Life #4 continues to thrill and delight. With one foot squarely in history, it pulls from the best of fantastic to create a tale that balances the two deftly.

Compass: The Cauldron of Eternal Life #4

Shahi and Ling agree to join forces…at least for now!