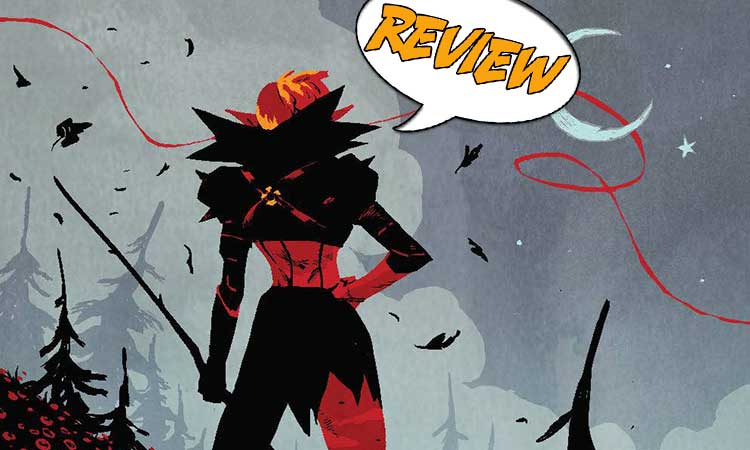 Escalion is in ruins and the young people are under suspicion! Can they escape the Faeries and avoid the Vampyres? Find out in Wynd #10 from BOOM! Studios. Previously in Wynd: King Yossar discovers his Queen has sent emissaries to the Duke, orders her to be locked in her chambers, and sends men to find Basil and his companions. Wynd and Oakley disagree about whether to continue with helping the Prince, or to leave and head for Northport. Wynd flies off and finds an old person who tells him about the Winged Ones, people who existed before Vampyres, humans, and all. Bastian and Yorik meet with the Council to ask for help. The Counselor points out they are the reason the Vampyres are here, and Yorik is the son of the Mad King. Lady Merien volunteers to lead them to the Capitol if she can get a small group of guards. Yorik realizes people hate him because of his father and wants to be someone better. Before they can leave, though, the tree is attacked and cut down, and the injured Thorn is still not fully healed!

COMING TOGETHER AMID CHAOS

Wynd #10 opens in the ruins of Escalion as the leader of the Faeries directs them to save the wounded and protect the sacred trees. The badly injured Thorn is the least of his concerns. He turns on the young people, demanding to know where Yorik is, and that is when they learn that the machine that felled the tree came from Yossar’s kingdom. The young people are arrested.

But Wynd is not with them. He was taken up to a large nest by two of the dark flying creatures. He demands to know what they want of him. They sniff him, and then, with their hands, pull together what looks like a small creature made of magic. They set this on Wynd, and it sinks into him and heals his wounds. He reacts further, flying away aimlessly.

Yorik and Meriel are captured by Vampyres. They have a little talk about responsibilities. Yorik wishes he could escape them; Meriel points out that everyone has responsibilities because that’s part of life. His gut reaction is to accuse her of not understanding him, but it turns out her situation is a lot like his. Meriel presses him further to try to find out what he really wants in life, if he even knows.

One of General Zedra’s men brings her a missive from Lord Nemo. Apparently Zedra has a boss, and she is not exactly following his orders to the letter. She just wants a little more time to let her plan progress before she talks with him.

Then the two black, winged creatures attack the prison wagon, breaking it open. Meriel and Yorik make a run for it, but Zedra grabs the prince. Then Wynd flies in, looking more like a creature than a person. Zedra attacks and draws blood. Tasting it, she realizes he is something different, something she does not recognize. They fight, and he flings her into a tree, wounding her. The Vampyres flee. The winged creatures pull the magic out of Wynd and fly away.

In prison, Bastian and Oakley worry about Thorn. Teek overhears the guards debating just killing them, or all of them except Bastian. Then Wynd arrives with Meriel and Yorik. They all need to leave, and quickly, but that means leaving Thorn behind.  But Wynd thinks he may be able to heal Thorn like the winged creatures healed him, and he gives it a try.

A WORLD IN CONFLICT

As always, Wynd #10 is a double sized issue, and it is packed with great art. So much imagination is put into everything we see, from the chainsaw-wielding, tank-like machine that is tough enough to tear down ancient trees to the cute baby-bird-like manifestation of the magic that heals Wynd. Even though we have learned about the world in small increments wherever the main characters happen to be, the art gives us the feeling that there is an entire world out there, a rich world with a life of its own.

I very much like the scene between Meriel and Yorik. They are in a prison wagon; it is constrained and intimate. Yorik sets aside his fears and apologizes to her. We have known what he is like all along, but to see him realize it and even to admit it is powerful and moving. And then Meriel has the strength to take what he tells her and hit him with further truths. She doesn’t just pat him on the head and reassure him. But she also treats him as his own person, not just the son of the King.

Wynd #10 is a terrific final chapter in the arc. Despite the considerable number of characters, everyone has had some time to grow and change. The world building makes it feel like there is a deep history and certainly there is considerable intrigue. I am so looking forward to the next arc.\

The world can be a big and dangerous place, but it is better with friends.