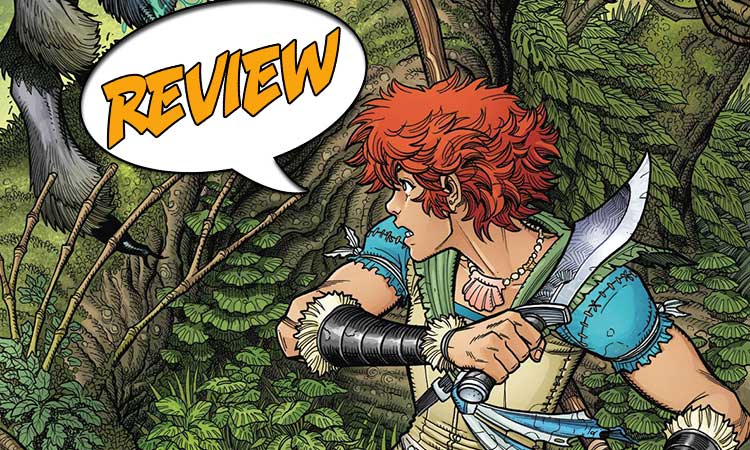 Bermuda grudgingly agrees to help Bobby try to rescue his sister. What new challenges await as they make their way across the island to where the Mers are? Find out in Bermuda #3 from IDW Publishing! Previously in Bermuda: A pirate battle in 1720 ends with the survivors seeking shelter in an island they didn’t know was there, and this is the history of the pirate town of Squall’s End. Bermuda awakens to find Bobby gone. Doc confesses he mentioned Squall’s End to him. Indeed, Bobby finds his way there. He wants to hire someone to help rescue his sister Andi, but he has no money with him. The pirates see a likely galley boy and are about to force him to sign a contract when Bermuda comes crashing in, brawls for a while, and drags Bobby out. But she cannot help him against the Mers because they use Dark Magic. The Mers do have Andi, and they can see she comes from another world – a world they want access to!

BERMUDA COMMITS TO THE RESCUE

Bermuda #3 opens with another flashback, this time to 1982 when an electrical storm starts to disrupt the electronics of a submarine called The Nerites. The sub dives deep, where it enrages a giant octopus and draws the attention of a giant shark. Some of the men survive when the wreckage of the sub lands on a previously unknown island.

Bermuda is plainly a take on the “Bermuda Triangle” legend with a main character that makes me think of a modern Peter Pan. She didn’t want to take on the Mers, but now she is racing across the island with Doc and Bobby in tow. It will be the full moon that night, and that means the Mers will be doing their rituals – and their sacrifices. She stops at a place decorated with “Keep Out,” signs and a tattered American flag. This is where the Ocean Men live, who are, we rapidly realize, the submarine survivors. Giant spiders also live here, and one of them jumps out, much to Bobby’s horror.

While Bermuda dispatches the spider, Doc runs off and is immediately captured by the Ocean Men. He had served on board the sub, left them to do his own thing, and they have decided he is a deserter and intend to court martial him, an action reminiscent of Lord of the Flies in a way.

Bermuda and Bobby sneak up and see this. Bermuda is not surprised, but before she can do whatever she intends, Bobby pops out saying he needs Doc’s help to rescue his sister from the Mers. These are military men, rather gray-haired by now, but even they think this is a hopeless plan. One of them has just enough time to recall that Doc’s ward was a girl, not a boy before she drops in, beats them up and ties them to a tree. For good measure, she shoots one of their guns to attract spiders. She is a bit vindictive.

As they approach the Mer village, Doc talks about needing to go through a door to get to Trangle, the island. When a door opens, the Mer magic gets stronger. The weird storm Bobby’s plane went through was one of these doors. Off in the distance, they see some strange, purple lightning, like the storm Bobby remembers.

But that would take a huge amount of power – more power than the Mers have access to. But what if someone else on the other side of a door was also trying to open one?

A STRANGE BUT SCENIC ISLAND

Bermuda #3 is a bit over the top in the plot department, but the art is captivating. The opening panel is jaw-dropping, a full-page panel showing the sub just as the giant octopus starts to envelop it. The ocean around them teems with other sea life. The action quickly picks up, and there is a gorgeous balance between the tight interior panels, lit in red (like a red alert) and the glorious expanse of the ocean in blues and greens. Even though the shark is ridiculously huge, like a megalodon, it is a wonderful close to the sequence.

The island of Trangle is an imaginative place. The terrain appears to be mostly jungle, and now we’ve learned of three distinct societies, each with their own style, that know of each other, but keep to themselves. Such is the encampment of the Ocean Men, a group of ragtag military men who have scrounged bits from their sub to create their space. It is an interesting take, as emblematic of who they are as the pirate town was of the pirates.

Bermuda #3 does not lack in action. Bermuda is a bit cantankerous, but extremely capable and rather entertaining besides. The plot is wild, but it is a fun read.