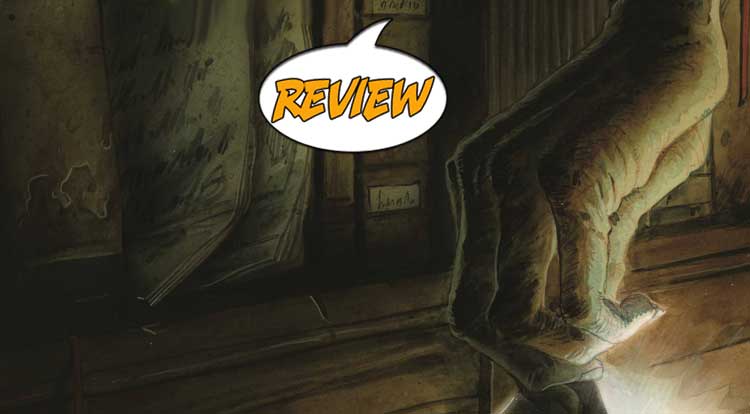 Are you real?  Is anyone?  Jane Ito isn’t sure anymore.  Your Major Spoilers review of The Unbelievable Unteens #2 from Dark Horse Comics awaits!

Previously in The Unbelievable Unteens:  Comic-book artist Jane Ito finds her world flipped upside down after discovering that the heroes from her comics were not so fictional… and she herself was one of them and had powers.  As she and the team of underdog heroes once known as the Unteens begin to come back together they slowly discover what happened to them, why their memories were wiped, and who was behind this evil plot.

I WAS A TEENAGE SUPERHERO

The first eight pages of The Unbelievable Unteens #2 are presented as the yellowed pages of a classic comic book, showing us the Unbelievable Unteens as they once were; battling their own emotions in a combat simulator in true X-Men style.  There’s tension, romance, and even a member on the brink of Dark Phoenix-style insanity/power surge, but as the last page turns, an alarm goes off, and a man named Karl awakens.  He showers, checks in on his sleeping sons and heads off to work, only to be interrupted by a strange woman talking to phantoms.  Jane/Strobe manages to remind him of their shared past, and the three of them set out to find their other missing members.  When they arrive at Spiral City hospital, they’re surprised that the man once known as Kid Boom remembers them all immediately, and that he’s been waiting for them.

Oh, and he’s not alone, as one of his comatose patients is their teammate Snapdragon.

The star of the show here is Tyler Crook, who switches from a modern, moody Dark Horse-style palette (think Hellboy: heavy shadows, heavy greens, lots of muted earth tones) to fullbore late ’80s X-Men stylings, with speed lines, exaggerated poses and expository dialogue.  It truly feels like a lost Bronze Age comic in many ways, which lends a lot of strength the the conceit that these stories were real, but somehow erased from reality.  Contrast with that the realism of the present-day sequences, and you’ve got a comic that looks amazing, top to bottom.  There are some clues to the unfolding mystery in these pages, but we clearly still don’t know the whole story, and as the book ends it feels like we’ve been given the perfect amount of information for this point in the story.  That’s no small task, as the tendency to give away too much, or too little causes equally frustrating storytelling problems in sequential comics, but this issue’s cliffhanger feels like we’ve opened a whole new puzzle box in the best way.

Despite the ‘From The World of Black Hammer’ branding, new readers of The Unbelievable Unteens #2 won’t be lost without knowing the greater universe, and the visual production of this issue is the kind of tour de force that makes the high concept work that much better, all tied with a compelling story for a well-deserved 4 out of 5 stars overall.  If you’re looking for a book that bridges the gap between traditional superheroes and modern metatextual madness, look no further, as this may be the book for you!

After a nebulous first issue, we cut right to the chase here, meeting the Unteens, tracking down what has happened to them, but only deepening the mystery, with art that impresses me in every way.