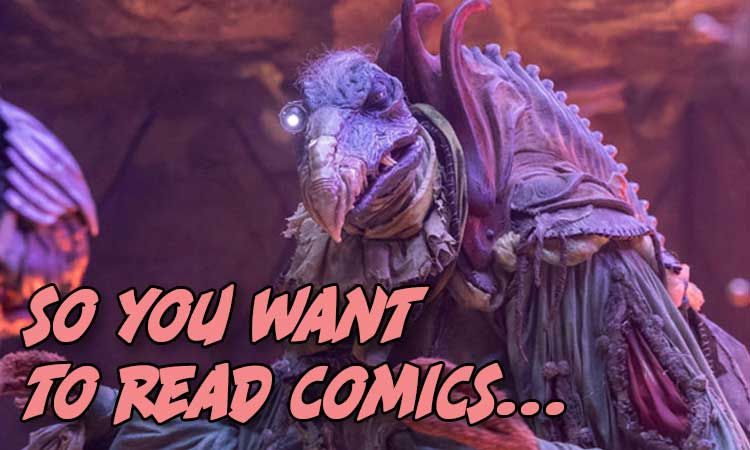 So You Want To Read Comics: Dark Crystal Edition

Don’t tell the Skeksis, it’s time for “So You Want To Read Comics” a weekly feature, where we take a look at a single topic and then offer a pair of comic book recommendations, perfect for new readers, based on that topic.  This week we’re diving into Jim Henson’s fantasy world of The Dark Crystal.

In 1982 after having a string of successes, either commercially, financially, or both, including: The Muppet Show, Sesame Street, The Muppet Movie, and not to mention production work on a little film known as The Empire Strikes Back, Jim Henson wanted to make a film that would challenge people.  Jim was looking for something that had showed a “growing, brooding interest in mortality”.  So he, along with Frank Oz, Gary Kurtz and David Odell would go on to make The Dark Crystal.  The Dark Crystal is a movie featuring animatronic puppets, where we see a “Gelfling” named Jen, tasked with journeying through a unique world filled with strange monsters and steeped in its own history, to attempt to heal the all-powerful crystal that is so important to their world.  It was notable in that it didn’t shy away from darker imagery and featured a complex plot and lore that wasn’t common with puppet based movies. While it did fairly well commercially, it was stymied somewhat by the disconnect between the darker subject matter and what people had come to expect from Jim Henson.  The following years were kind to the film and it has since grown a sizable cult following and even was given a prequel series on Netflix.

So, what kind of comics should you look for, if you happen to be one of those people who either loved the movie from its initial release, or came to it later? Why not try these?

The Power of The Dark Crystal

Okay, this one is a bit obvious, sorry.  Even before the first movie had hit theaters the screenwriter, Dave Odell and Jim Henson had begun talking about a possible sequel.  Unfortunately that sequel never came to be, for many reasons, including Jim Henson’s unfortunate passing. Years later Dave attempted to take what he remembered from those conversations and create the sequel again, with Genndy Tartakovsky (the guy behind Dexter’s Laboratory and Samurai Jack) brought in to help.  This still didn’t get made, but the proposed plot of two new characters Thurma and Kensho, stealing a shard from The Crystal of Truth to kickstart a dying star, would be used to create this comic book series.  It doesn’t get much more straightforward than that. This is basically the sequel that fans never got. Now of course it doesn’t have that same look because these aren’t animatronic puppets, but there’s still an opportunity for fans to get to see what this world looks like years after the events of the film.  It’s nice to see that Thra isn’t frozen in that 1982 film, but has changed and evolved.

One of the things that have made The Dark Crystal and enduring property that is both beloved in its original incarnation but also popular enough to spawn its own offshoots, is its deceptive complexity. It lures you in with strange creature designs and fun puppets and at times, downright cute things, but then hits you with (in universe) millennia of lore filled with war, strife, and magic. It’s a similar sort of deceptiveness that is contained in Canto.  This is a comic series that tells the story of a little clockwork person who like all the others of his kind, are born into slavery.  He eventually breaks free and goes on a quest to find what he needs in order to save a young girl from dying.  Loosely based on Dante’s Inferno, this series comes off as lighthearted, but contains some truly heart wrenching moments and touches on subject matters that most might not expect from a comic book about a little toy man with a playful red scarf. Canto originated as a 6 part series, but has gone on to have two other miniseries and a short side series.  So there’s no shortage of adventures to enjoy, a world full of its own history, and dark themes to ponder with this title.

*Bonus* Go check out Episode 374 of The Major Spoilers Podcast to hear the crew talk about The Dark Crystal: Creation Myths, another prequel series to the original film.