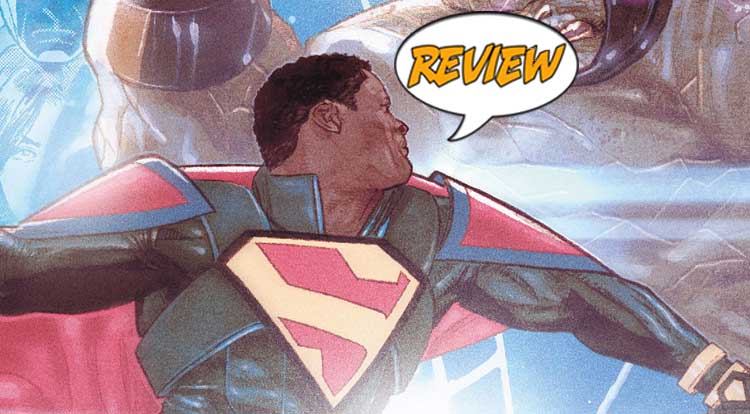 Darkseid has absorbed his multiversal doppelgangers, and now stands as the Ultimate Darkseid in all the multiverses.  That’s bad…  Your Major Spoilers review of Infinite Frontier #6 from DC Comics awaits! Previously in Infinite Frontier: The next phase of the DC Multiverse begins and we’ve got one word for you: DARKSEID.  Our heroes knew that someone had been pulling the strings this entire time, but are they prepared for it to be the biggest bad of all?  As President Superman, Alan Scott, Roy Harper, and the rest converge for a showdown, the secret of Omega Planet is revealed.  Plus, Barry Allen is put on a path he may never get off!

We join Barry Allen already in progress, which almost always means that he’s hurtling through the Multiverse to warn someone of their oncoming doom.  On Earth-Omega, we find Justice Incarnate and the Justice Society of America in all-out battle against minions of Darkseid, using the power of the Omega Lantern (a resurrected Roy Harper with a Black Lantern ring).  While Obsidian deals with Roy’s corruption, President Superman has to face down the traitor in his team’s midst.  When Barry arrives, though…  things get unclear.  President Superman rallies the troops, to be continued in the first issue of his Justice League Incarnate series in November.  Cameron Chase takes over the DEO, to be continued somewhere else.  Darkseid revels in the power of a lost Pre-Crisis concept and The Flash?  The Flash ends up in the strangest place of all: The ruins of the pre-Crisis Multiverse, where a familiar face awaits him.

WELL, NOT *SO* FINAL

My biggest complaint about Infinite Frontier #6 is the same one I’ve been echoing about DC events for several years now: They don’t end, they just set up the next DC event.  I appreciate seeing the JSA in action again, and I appreciate the attempts to build several of the previous villains (The Empty Hand, The Gentry, Nekron, The Upside-Down Man and Alexander Luthor) into a cohesive tapestry of Crises, but I’m still frustrated by this issue’s ending, especially as regards the confusing fate of Barry Allen.  it’s a well-drawn issue, certainly, and Williamson knows how to keep the plot moving even with this many moving parts, but there are moments in this issue that I’ve looked at four and five times, and I’m still not entirely sure what happened.  Darkseid is apparently now the agglomeration of Earth-1 Darkseid and Post-Crisis Darkseid, making him a three-fold Ultimate Darkseid, and Machine Head shows us exactly how much power that is, but we’re all going to have to wait to see what this all bodes.

BOTTOM LINE: NOTHING EVER ENDS, ADRIAN

All in all, though, Infinite Crisis #1 is a well-drawn comic book (especially the action sequences, where even the smallest distant figure is still recognizable, a difficult feat for which Xermanico deserves kudos) with some strong plot moments and what I hope will be ongoing consequences for the denizens of the Multiverse(s), earning a better-than-average 3 out of 5 stars overall.  If nothing else, though, Infinite Frontier has managed to bring all the previous universal Crisis events together into a whole for the first time and restored the Justice Society to reality.  Now, we’ll see how hard they have to work to one-up this cosmic menace.

One the one hand, I hate how nothing ever ends, it just spins into the next big crossover event. But on the other, this is a big energetic comic with a lot of moving parts that holds together pretty well and looks good doing it.