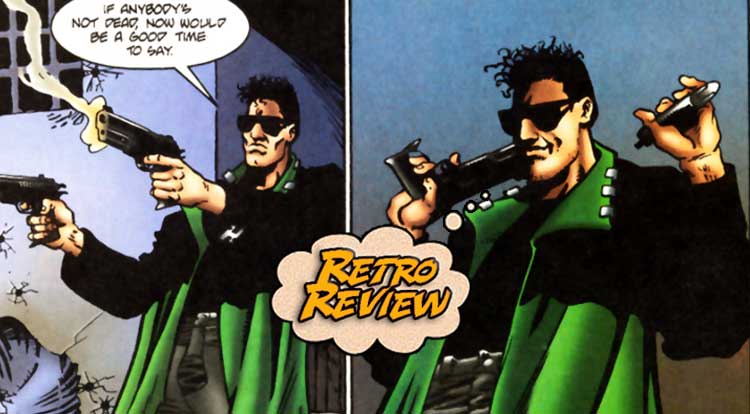 It’s been twenty-five years, and Tommy Monaghan is still the only good thing to come out of the Bloodlines crossover.  Your Major Spoilers (Retro) Review of Hitman #1 awaits!

Previously in Hitman:  After growing up in a Gotham City orphanage, Tommy Monaghan joined the Marines and fought in Operation Desert Storm, back when that was still not just a topical reference.  When he came home, he used his new skills as a hitman and mercenary, killing only people that he deemed to be morally bad.  During one such hit, he was bitten by an alien parasite which left him able to not only read minds, but see through solid matter.  With his new skills, Tommy set out on a new career path, as a hitman who targets metahumans! Of course, that’s not why he’s in the middle of a fight right now.  That’s a more personal matter, as Tommy’s previous dealings have put him in the crosshairs of the Dublez crime family, who want him dead.  It’s actually a really good introduction, as the battle not only allows us to see Tommy in action, with fine John McCrea art, it allows writer Ennis to explain most all of what we need to know about our hero in conjunction with a cool action sequence.  Of course, the Dublezes have more than just hired thugs at their disposal…  This is the DC Universe after all, forcing Tommy to stand face to face with a team of costumed superhumans. It also allows him to kill them all, reminding us of the two MOST important things about Hitman: Tommy is a badass, and Garth Ennis doesn’t like superheroes.  (Ten years later, he’d give us The Boys, which which underlined that point and added three exclamation points.)  Having gotten rid of the people who want to kill him, Monaghan heads out for a drink at Noonan’s bar, where his friends are discussing movies and playing poker.  Tommy refuses to use his powers to cheat, because he has his own code of ethics, while a side conversation once again effortlessly delivers the exposition. Tommy also meets a girl (whom he checks out with his x-ray vision, because he’s got ethics, but he’s still kind of a jerk), recaps his origin and goes shopping for ammunition before receiving a phone call with a new assignment.  A grieving father has paid a million dollar bounty for a hit on a costume, which is both right up Tommy’s alley and will pay a ridiculous amount of money.  The only downside? Tommy agrees to kill The Joker, but decides to go on his date first.  That proves to be a mistake, as it allows Gotham’s resident vigilante to hear about the bounty and go looking for the would-be Joker-shooter.  Batman confronts him, but Tommy’s manages to shoot right at his armored bat-symbol (which cleverly inverts one of the signature lines from Batman: The Dark Knight Returns) and makes a run for it. But at least he got to vomit on The Batman.  That’s got to be worth some influence points in the Gotham underground.  And as the issue ends, he’s taken into custody by the GCPD, not because he’s outgunned, but because Monaghan doesn’t shoot cops, which ends the issue on a surprising note for me.  As someone who avoided Hitman #1 back in the 20th Century, I admit that I’m wrong, as this issue is a really well-done introduction for a nuanced character whose jerk-with-a-heart-of-gold-and-a-hail-of-bullets routine predates modern Deadpool depictions, paired with expert art by McCrea, earning 4 out of 5 stars overall.  The book’s only real weakness is 2000s-era DC printing and coloring, which muddies up McCrea’s lovely art and makes certain sequences really hard to read, but even with that, I would recommend this book for fans of comics , both young and old.

As a first issue, it's a master class in storytelling, but it's also a well-drawn story with depth and a central character who is both complex and interesting. It's good.