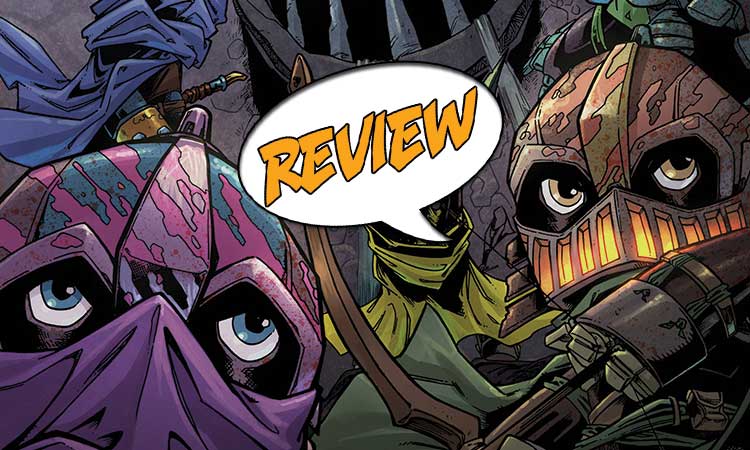 Canto and Aulaura travel to the Frysta Wastes and find…nothing. Have they truly reached a dead end? Find out in Canto III: Lionhearted #3 from IDW Publishing! Previously in Canto III: Lionhearted: The small knight has decided to recruit allies to fight the Shrouded Man, including the Slavers (Vikens) – who have vanished from Arcana. He and Aulaura go to Bodil the Hermit’s lair, hoping to find a clue. In a history she was writing, she said she believed they were going to the Frysta Wastes in the far North. In Dis, a Fury brings a Viken to the Shrouded Man, who demands to know where its people are. It refuses to say, but the Shrouded Man gets a glimpse of its thoughts and orders the Fury to gather an army and head north.

TO A LAND OF SNOW AND ICE

Canto III: Lionhearted #3 returns to Falco and Rikta, with a few other companions including Niko, as they sneak into Dis through the sewer tunnels. There they are attacked by a couple horrible creatures that look like spider constructs. They can handle them, but when they realize there are more in the shadows, they make a run for a sewer grate within the city and pop out into daylight to see an army on the move. They have just enough time to realize they should get word to Canto when they are caught!

In the Frysta Wastes, Canto and Aulaura plod through the snow. Bodil’s map says they are in the correct location, but there is literally nothing around but snow. Canto starts to doubt himself, but Aulaura reminds him of all the things he has accomplished so far, and that the Shrouded Man is starting to fear him.

Later that night, as he gazes into their campfire, he hears the beginning of the story of the Furies, and one of them appears in the fire. Then suddenly he is transported to a place where a Fury sits. Is this a real place, or is it a dream? The Fury claims this is a place of memory. She knows that, with the Shrouded Man’s heart, Canto can feel his memories. Memory is important to her. She and her sisters have no recollection of their time before they became servants of the Shrouded Man. He does not trust her and says he will only share those memories with her if she turns the army away from the Vikus.

He returns to the Wastes only to find the ice suddenly breaking all around them!

FROM ICE TO FIRE

Canto III: Lionhearted #3 plays a lot with scale. Canto’s people are small, and when the story opens, we see five of them in comparison to the huge sewer grate. They may be small, but they are determined. Now that they have become independent, each of them has a distinct color scheme. This helps as the enter the tunnels – we can keep them straight especially when the giant spiders attack. The monster design is terrific, too. These guys have multiple glowing eyes, and their legs look like hinged blades of metal.

From all of the color of Dis, the story moves to the Frysta Wastes. Despite there being no scenery to speak of, there is texture in the snow from drifts to odd ice formations. Canto, Aulaura, and the Malorex add the only color and life to this place. The endless pale blues give way to the blue-gray of the night sky, only to be interrupted by the Fury. Her place of memory burns like the inside of a sun, and Canto’s glimpses of her memories fall on that background like sunspots. It’s quite dramatic.

Canto III: Lionhearted #3 is a top-notch fantasy adventure that continues to surprise and delight.

As Canto and Aulaura explore the Frysta Wastes, the Shrouded Man mobilizes his army!