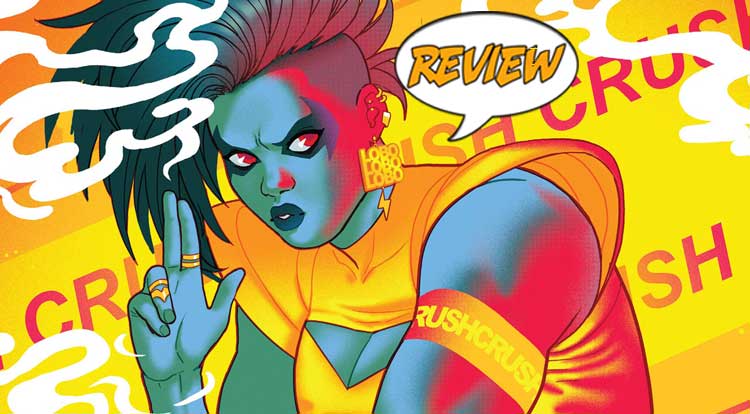 Lobo’s out of jail…  but now Crush is stuck there in his place!  Your Major Spoilers review of Crush & Lobo from DC Comics awaits! Previously in Crush & Lobo: Lobo’s out of prison and already back to wreaking havoc across the cosmos, and Crush gets stuck behind bars singing the jailbird blues in his place.  She needs a plan to prove she’s not her dad, and fast!  But it’s gonna take a prison fight of galactic proportions to pull it off!

After her father entered her life, Crush seemed to hope that their relationship was going to improve.  Instead, she was tricked into taking his place in jail, wearing his tracking device so that the automated prison systems think she IS him.  It’s a problem, especially when she ends up in group therapy and realizes that Lobo cadged just enough jargon from the therapist-bot to trick her in the first place.  Filled with rage at her dad, she figures out a plan to get free – Punch the biggest, meanest inmate in the… let’s call it a face. Once she gets scanned in the infirmary, no one can deny that she not her dad, allowing her to offer the prison administration a deal: Let her go, and she’ll bring back the real Lobo, fixing their population numbers and her own family issues in one fell swoop.

Of course, if she fails, they’re going to kill her…

Crush & Lobo #4 is less playful than the previous issues, but it’s not a bad thing at all.  Crush’s frustration at her dad is wonderful, as are the repeated flashbacks of her girlfriend.  There’s a lovely sequence in art therapy class where both the art and the dialogue are absolutely perfect, and the brilliance of her plan is, in retrospect, obvious.  There are a few bothersome storytelling points for me, such as a moment where we see what Lobo is up to in a split-screen, only to have it be the expected mayhem, thievery and explosions.  Tamaki’s script examines Crush’s emotional issues more closely than many previous Czarnian tales ever have, and the best moments in the art are all focused on facial expressions (like Crush’s despair in solitary, or the joyful smile on Kate’s face in her memory.

The “girl version of an established male character” is a familiar trope these days, but Crush & Lobo #4 plumbs the emotional depths of paternal relationships in unexpected ways, putting the characters on a collision course while showing how resourceful and clever Crush can be, all with really well-done, expressive, downright pretty art, earning 3.5 out of 5 stars overall.  This one is fun, and I hope that other readers are looking forward as fondly to the idea of Lobo’s daughter cleaning his clock as I am.

Crush's narration makes the book for me, and her plan to get free and find her dad is remarkably fun.