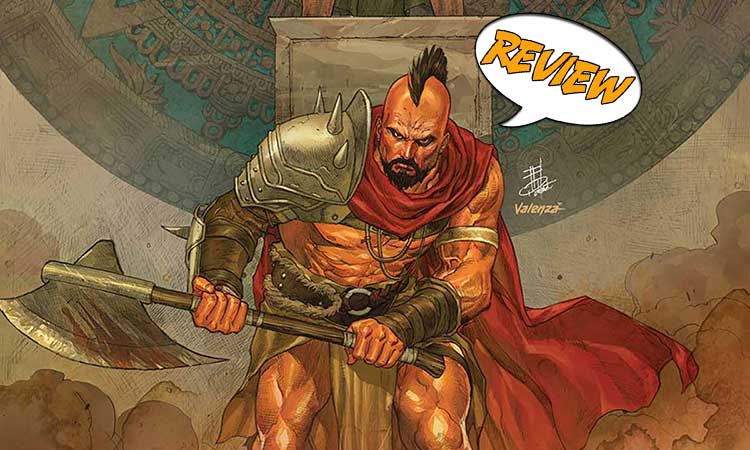 Greycastle has accepted a task to rescue Uadjit, the Dragon Prince, but ended up in the middle of a civil war. Check out the thrilling conclusion of Helm Greycastle #4 by Image Comics!

Previously in Helm Greycastle: Montezuma III isn’t who we thought he was. In fact, he seems to be Hernan Cortez who switched souls with Montezuma during the last Spanish invasion. Helm Greycastle must team up with Camazotz to rescue Shava, Oskar, and Uadjit before they are sacrificed at Cortez’s whim.

Helm Greycastle #4 begins with a flashback showing Hernan saying good bye to Malinche before he was captured by Montezuma and Camazotz. In the present, Vola tells Greycastle that he is actually Coyote and explains his background when he was a baby. With this new knowledge, they head to the Sun Temple. At the Sun Temple, Cortez is killing the prisoners. To start, Montezuma (or Cortez) forces Uadjit to kill the prisoners. But before any more people can die, Shava and Oskar free themselves right as Helm Greycastle and his team is teleported into the fight.

Feng arrives with his undead escort, and they also join the fray, causing more chaos. In the process Xiuhtecuhtli is killed and decapitated but gives Uadjit his medallion at his last moment. Ultimately, the good guys are able to overcome the bad guys and arrest Cortez. But it seems that Malinche has brought an armada onto their shores!

I was caught off guard by the flashback in the beginning of Helm Greycastle #4. It felt a little jarring because Herman Cortez was never a point of view character. The flashback was only set up so the cliffhanger at the end makes sense. There is a lot going on in this as the creative team tries to wrap up all the story points in this issue. But I can’t help but felt a little jarred with how much content they tried to fill in. Which makes the flashback feel worse because it took up a couple of pages that could have been used to the main plot. The writing and ideas are great, but this needed a few more pages of space. Maybe there was a publishing requirement that required them to setup the next arc.

I really liked what Xiuhtecuhtli death and giving his amulet to Uadjit. I wonder what implication that is going to have in the next arc and if his role is going to continue to increase in the storyline. For that matter, I don’t think I’ve seen anything about the next series even if this issue sets up a new arc. Hopefully we will get more information soon!

Helm Greycastle has introduced me to a new set of myths and folklore. While I understand that this is an interpretation, I immensely enjoyed the break from your standard fantasy tropes. This is a solid 4 out of 5 for Helm Greycastle #4. I think this is a must pick up series if you are into fantasy comics and I look forward to seeing what the creative team designs next.

Helm Greycastle #4 provides an exciting conclusion to this story arc. While, there were some pacing issues, overall this is a high recommendation from me.