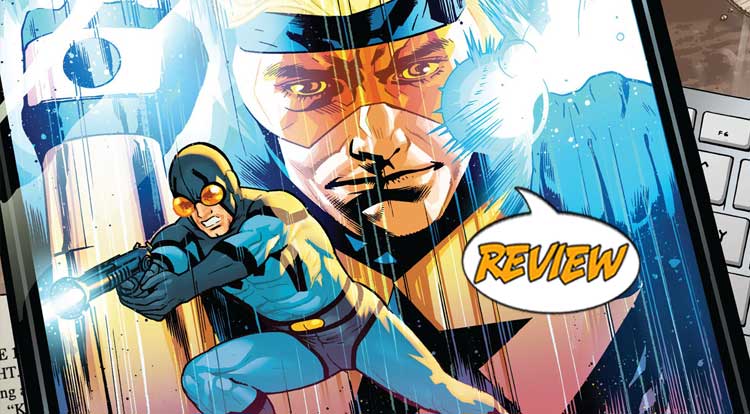 Booster has big plans… but Beetle gets some bad news.  Your Major Spoilers review of Blue And Gold #2 from DC Comics awaits!

Previously in Blue and Gold:  Who needs the Justice League anyway?  Our heroes certainly don’t!  After a painful rejection from the DC Universe’s team of A-list heroes, Booster Gold and Blue Beetle strike out on their own.  Thanks to the Kord Industries fortune, anything is possible for this dynamic duo… right?

As our story opens, a Kord Industries transport featuring patented driverless technology is out of control, hurtling towards oblivion with Booster Gold tied to the roof.  Fortunately, Booster Gold doesn’t travel alone and Blue Beetle is in hot pursuit in is fabulous new Buggy, though his more pressing concern is that fact that someone hacked his code.  Beetle pulls off the save, but loses the shipment, and worse still (from Booster’s perspective) he forgot to turn on the livestream to show to all their social media followers.  When they track down the would-be hijackers, though, it’s all-out action, with both heroes guns a’blazin’ (metaphorically, since Blue Beetle carries an energy weapon and Booster has blasters in his gauntlets) to take them down.  Their followers are thrilled, but the board of Kord Industries is not, and they have voted to remove Ted from his CEO position and revoking his privileges, even access to his labs.  They certainly aren’t going to be willing to bankroll Booster’s latest superhero project.

That’s a real bummer, since Booster ends the issue going public with the announcement that Kord Industries will be bankrolling his latest superhero project.

THE BUGGY IS FUN

I have to say, I enjoyed this issue somewhat more than issue #1, but it still has the same flaws in the story that bothered me there.  Booster Gold has reverted to his ’80s persona once more, focusing entirely on fame and fortune, while Blue Beetle spends most of the issue monologuing about his lack of confidence and how he was a mediocre Justice Leaguer.  it’s hard to get past, especially with Skeets serving quips about Booster’s short-sightedness, impulsiveness, and general doofusery throughout.  Sook’s art helps to take up a little of that slack with excellent action sequences, expressive close-ups, and a super-cool design for Beetle’s new dune buggy, but suffers from a little bit of sketchiness in the wider shots.  The last page is a winner, though, featuring a smiling Booster proud of his new hero-for-hire idea, with enough detail that you can clearly see the Legion emblem on his stolen flight ring, but we’re setting the heroes up for another big fall, which makes me worry that the whole series is just going to be a series of humiliations for the Blue and Gold team.

In short, Blue and Gold #2 improves on the first issue in my eyes but suffers from the same failings as before, with a retrograde Booster dragging a confidence-free Beetle into new trouble, but it’s a good-looking comic book and there’s still four issues for them to get their mojo back, leaving this issue with a better-than-average 3.5 out 5 star overall.  I like this book, but I want to like it more.

I hope that the sad sack heroes routine doesn't last for the whole series, but some fun art from Sook helps that medicine go down, making for a pretty good comic.