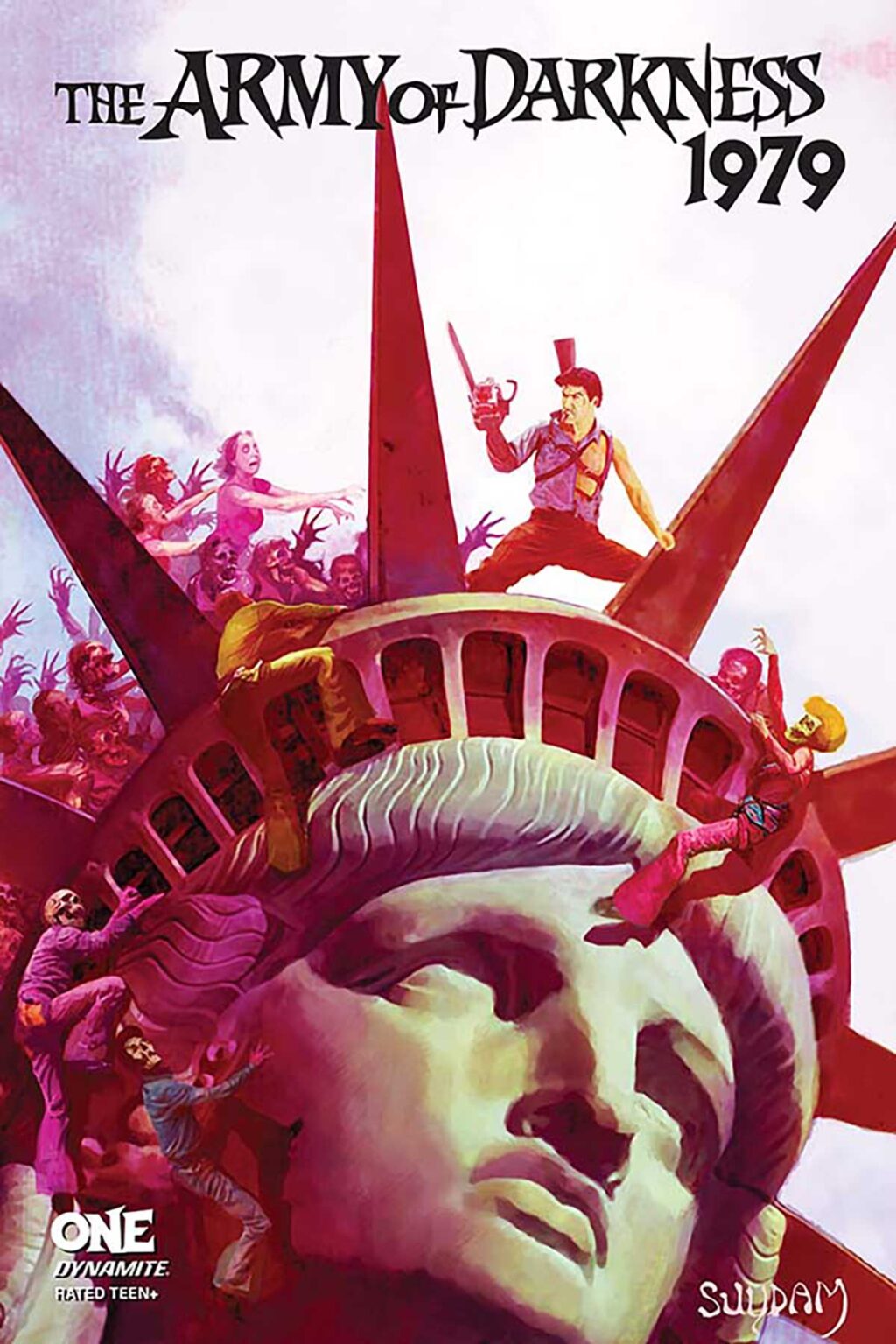 Army of Darkness 1979 #1
writer: Rodney Barnes
artist: Tom Garcia
covers: Jason Shawn Alexander (A), Arthur Suydam (B), Junnguen Yoon (C), Stuart Sayger (D), Blank Authentix (E), Arthur Suydam (F-RI/BW), Stuart Sayger (G-RI/BW), Jungeun Yoon (H-RI/BW), Jason Shawn Alexander (I-RI/BW), Arthur Suydam (J-RI/Tint), Jungeun Yoon (K-RI/Tint), Jason Shawn Alexander (L-RI/Tint)
FC | 32 pages | Horror, Action/Adventure | $3.99 | Teen+
Dare we say it!?!? Yes! We Dare!
ASH IS BACK, BABY!
After his most recent appearance in Die!namite Lives, Ashley Williams is retired. Settled down. Haunted by the Deadites and the Necronomicon no more- wait, no, that ain’t right… None of that is true! In fact, not only is Ash still haunted by Deadites and the Necronomicon, but he’s haunted by the both of them in the 1970s (kids, ask your parents. Parents, ask yourselves!)! And what does he find in the South Brox of the late 70s? Gangs! And what have those gangs found? The Necronomicon. So, what does that make the gangs? Bad-Ass Mxxxerfxxxers.

Dynamite proudly presents a brand new Army of Darkness series, written by Rodney Barnes (Killadelphia), drawn by Tom Garcia and featuring an awesome array of cover artists, including the Dynamite return of Jason Shawn Alexander, along with Junggeun Yoon, and Stuart Sayger and the Zombie King himself — Arthur Suydam!

Rodney Barnes is an American screenwriter and producer. Barnes has written and produced The Boondocks, My Wife and Kids, Everybody Hates Chris, Those Who Can’t, Marvel’s Runaways, American Gods, Wu-Tang: An American Saga, and is currently an executive producer/writer on HBO’s Untitled Los Angeles Lakers drama. In comics, Barnes is the creator of the critically acclaimed Killadelphia from Image Comics, and has written Falcon and Lando (Star Wars) for Marvel Comics.