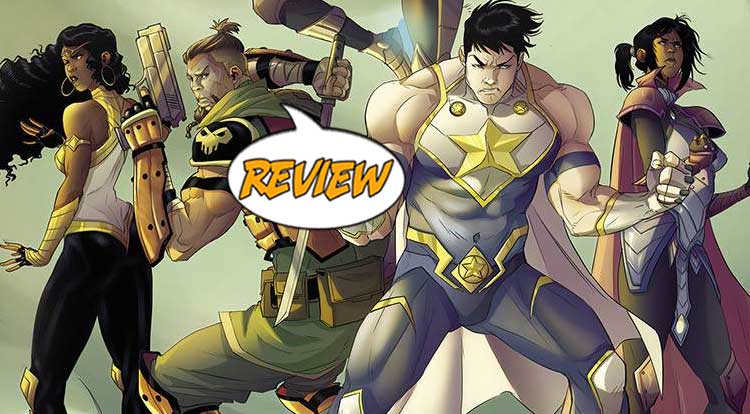 The final universe is on the brink of cataclysm…  Can the heroes save it?  Or is it up to the world?  Your Major Spoilers review of Commanders In Crisis #12 from Image Comics awaits!

Previously in Commanders In Crisis:  All this time, the Crisis Command has fought to undo what’s been done.  From the death of empathy, to the passage of the American Individuality Act, they’ve tried to preserve what they thought was right, what the world needed.  But with all of existence in the hands of the world’s population, in OUR hands, thanks to the power of a word, will the ideas of the past save us?

Or will they die to give birth to something new?

Thanks to the power of Originator, the entire population of the world has been linked into one mental conference call, beginning with… an apology.  The Crisis Command members admit that, as strangers to the world, they aren’t the ones who should be making decisions about how to proceed.  So, instead, everyone will get a say, everyone will get a vote and the world will proceed based on how it all goes.  It’s the ultimate meeting of the minds, with those devoted to extinction getting their say.  The four heroes wait while their leader Frontier fights her evil self to keep her from moving before the clock runs out.  After an interminable wait, one little girl approaches Originator with the world that they’ve all chosen: One word that will save or doom the world.

And that word is “promise.”

A LABOR OF LOVE

I don’t think I’ll be spoilering things to let you know whether the world is saved or not, but the ending makes it clear that it’s not going to be all beer and skittles for the population of Earth-Z.  The American Individuality Act that would have dismantled the United States is withdrawn, but in its place, an even more radical bill is being pushed.  Frontier defeats her evil self, but exits reality to find unknown places beyond.  Each member of the Crisis Command gets a little bit of closure, if not a happy ending, and while things are better, the heroes haven’t magically punched the world into submission.  The fun or Orlando’s story comes in the fact that the story admits that superheroes simply aren’t the solution for the kind of problems that the modern world faces.  Artwise, Tinto delivers another wonderful visual spectacle and I have to give special attention to the omnisapienteleunification sequence,  where people of all shapes, sizes, creeds and colors are shown as part of the pink-hued unification.  What could have ground the story to a halt instead makes each panel fascinating, and the final page collage of Frontier’s arrival in the new reality brought a smile to my face.

BOTTOM LINE: THIS IS GREAT!

So, here’s the thing: I love Steve Orlando’s work.  I’ve been trumpeting this book since issue #1.  But believe me when I tell you that Commanders In Crisis #12 is a truly impressive work, firing on all cylinders and managing the impossible task of making the Silver Age and the real world seem in any way compatible, earning 5 out of 5 stars overall.  As this issue ends, the only thing that I didn’t like was the fact that this is the last issue and perhaps the last we’ll see of these characters, and that’s a shame.  Pick it up, you won’t be sorry!

This book gives me an ending that I didn't realize that I needed and represents the best of classic comics with a modern edge in a truly inspiring way. You should have been reading this comic!