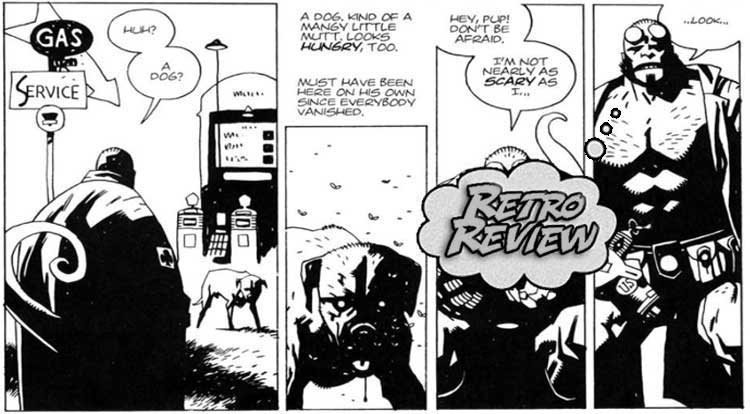 He’s a comic icon for the last 30 years, but there’s still some controversy about what is his FIRST appearance…  Get ready to meet HELLBOY!  Your Major Spoilers (Retro) Review of San Diego Comic Con Comics #2 awaits! Previously in San Diego Comic Con Comics:  It’s sometimes hard to talk about various eras of independent comics as separate entities, but in my mind, the early 1990s were a major resurgence of comics that weren’t just superheroes from the Big Two/Three/Four.  The rise of Image Comics was a tide that lifted all ships, and by 1993, Dark Horse Comics was in a Golden Age, featuring work from legends, future legends and future fallen legends.  ’93 saw Paul Chadwick, Matt Wagner, John Byrne, Arthur Adams and more delivering on incredible titles, and even Frank Miller’s Sin City, a book which I still have a love/hate relationship.  But one of Dark Horse’s brightest and longest-lasting stars was just cresting the horizon in the summer of ’93, and that’s what brings us to this comic book oddity, a 1,500-copy promotional book given away at the 1993 San Diego Comic Con. The question of where Hellboy first appeared is a complex one.  A few months before this issue hit, Mike Mignola drew the cover for Dime Press #4, which features a grey-skinned Hellboy (or Hellboy prototype), while Next Men #21 features the character’s first published appearance in a regular title.  To my mind, though, this story should count as the official FIRST first Hellboy appearance, as it features a full, albeit short, story.  Somewhere in the American southwest, Hellboy is investigating a mysterious series of disappearances, leading up to an entire town gone away.  Of course, once he arrives, the real story becomes abundantly clear. What seems to be a harmless stray turns out to be a carnivorous lost god of the Egyptian pantheon, whose strength is more than a match for the scion of hell.  Hellboy isn’t entirely sure that his Right Hand of Doom is up to the task of punching this particular evil, forcing him to think creatively about destroying a godling.  That’s where the hilarious cartoon physics comes into play. Make sure that you add “killed a god with a road sign” to your mental resume of Hellboy’s most amazing feats.  Mignola’s rendition of the red guy isn’t quite the iconic image that it would become in a couple of years, but his use of blacks and shadows is incredibly dramatic and almost makes me forget that I’m reading a black-and-white comic.  This story only spans a few pages, but it’s clear that we’re on the cusp of something that comics hadn’t seen in a regular monthly book back in ’93.  As someone who was heavily into the Dark Horse titles of the era, I’m always kind of disappointed that this title didn’t grab me the way Next Men and Madman did, especially given the sheer volume of Mignola Hellboy that I now know was on its way.  This story ends in a perfectly appropriate way, with Anubis dispatched not by magic or cleverness, but by a vaguely hilarious gas pump explosion. As a preview, it’s excellent, showing us a thumbnail sketch of what Hellboy would be all about without spilling all the secrets or giving away the farm, and the quality of this issue’s art serves as an impressive appetizer.  Knowing what I know now, I’d go back and tell 1993 Matthew to check out this comic and also to stop chasing after that one girl, because she’s nothing but bad news.  San Diego Comic Con Comics #2 is about more than just Hellboy, including bits of the sadly never-completed Danger Unlimited, as well as Concrete, Monkeyman & O’Brien, Sin City, Madman, Martha Washington and Grendel.  It also has MAD legend Don Martin on a two-page gag strip about a mad scientist. Fans of Rick & Morty should jump on Doctor Dork, honestly, as it’s not quite as cynical a property, but it’s equally as funny in its own way.  All in all, San Diego Comic Con Comics #2 is one of those perfect little books that justifies its high price on the back issue market, featuring excellent work from a group of creatives at the top of their game, with Mignola debuting the character who would become his magnum opus, earning 5 out of 5 stars overall.  I know that selling price and value aren’t the same thing, but there’s a reason that a 9.8 graded copy of this book went for $1200 dollars a few years ago.

As a first appearance, it's note-perfect, and shows off not only Mignola's skills as a young artist, but a representative look at what a Hellboy story would be, a balance of humor, horror and explosions.