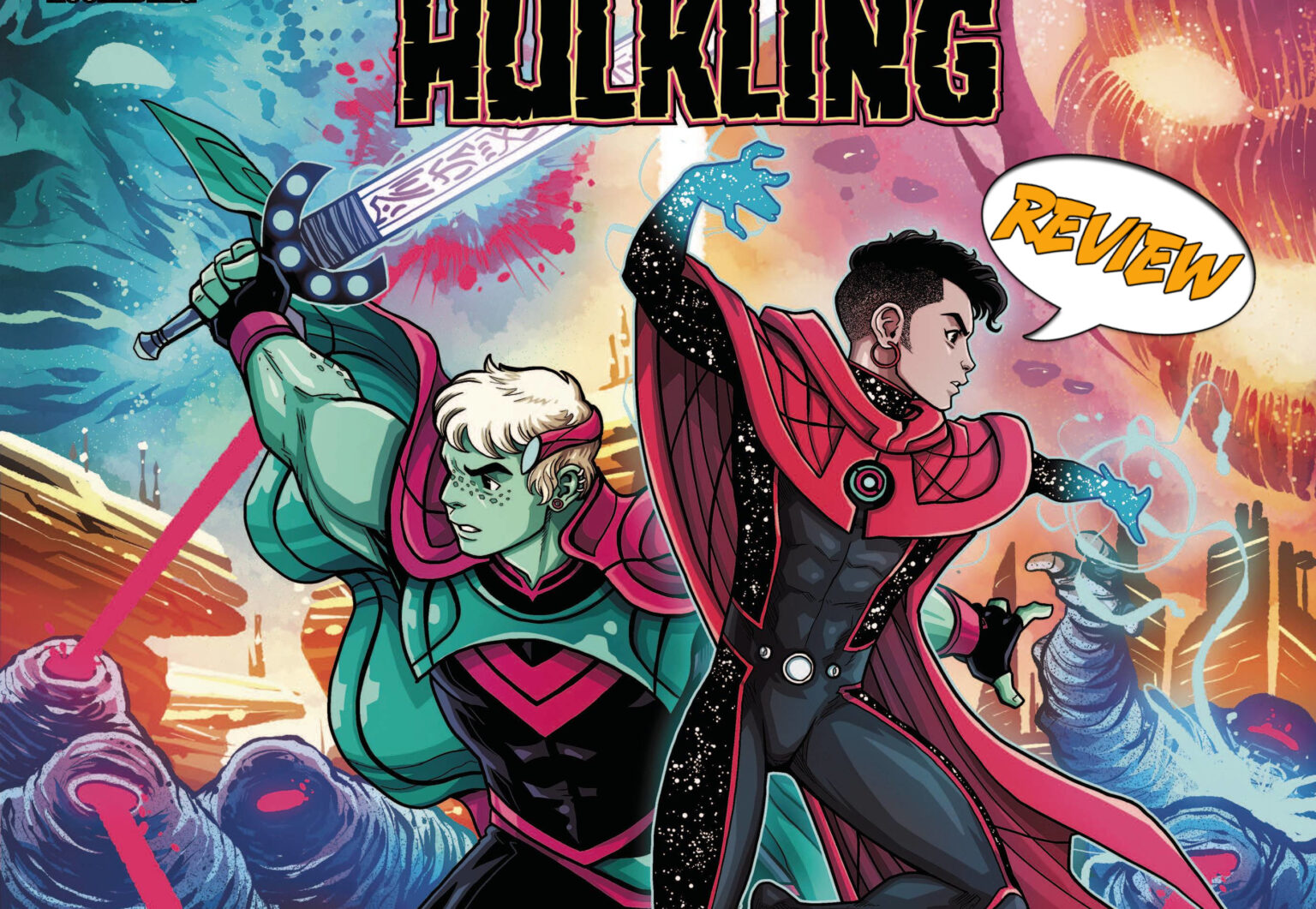 Dormammu has control of Ego, the Living Planet. Hulking and Wiccan lead the Kree/Skrull Alliance to stop him and protect their kingdom. Find out more in Wiccan and Hulkling #1 by Marvel Comics!

THE LAST ANNIHILATION: WICCAN AND HULKING #1

Previously in Wiccan and Hulkling: Hulkling is the new emperor of the United Kree/Skrull Alliance and has recently married the love of his life, Wiccan. However, both split up to defend two different planets against the Mindless Army! These young heroes must somehow send Dormammu back to the Dark Dimension, even though Hulkling’s sword has been shattered into pieces!

Wiccan and Hulking #1 tells two different stories at the same time. The first is when Wiccan and Hulkling met each other in high school. Hulkling was a jock and Wiccan was the school laughing stock. Wiccan is bullied for being gay, but Hulkling befriends him. When an interaction with a bully gets physical, Hulkling comes to his defense. After the fight, Wiccan and Hulkling reveal their powers to each other, kiss, and join the Young Avengers.

In present day, Wiccan is fighting the Mindless Army on Shrullos with the help of Abigail Brand and S.W.O.R.D. The group heads to Monastery Lake and Wiccan tries to repair Hulkling’s sword, but he ends up face to face with Dormammu! Hulkling is fighting on Throneworld when Avalanche accidently sends Hulkling and his crew down a hole. They fall into a set of ruins and accidently set off a countdown to an explosion. Both Wiccan and Hulkling are in hopeless situations until they remember their wedding rings, which allows both of them to switch places. Wiccan is able to use his magic to save the planet and Hulkling takes his repaired sword and stabs Dormammu! They then return to the fight against the Mindless Army.

USE YOUR SKILLS WISELY

I loved that Wiccan and Hulkling #1 switched between their origin story and present day. Usually, these flashback sequences don’t work very well on the page, but Anthony Oliveira masterfully meshes both timelines together. I think this is because we go from seeing young love to a committed couple. For them, there is never any doubt about their relationship throughout the comic. Which reminds us of an important fact, always have a support. These heroes are trying to save the world and have done so many times. And most importantly, they do this together.

I really liked the art in this issue. I found myself engaged with Wiccan and Hulkling’s character design. I don’t think it is very different than most other things coming out of Marvel Comics, but I felt particularly attached to the characters. Maybe it is just my love for the characters that reflect this opinion but regardless I was excited about how they carried themselves throughout the comic.

The Last Annihilation: Wiccan and Hulkling #1 reminds readers why these title characters are a good fit for each other. They are able to do the right thing together despite complicated heritages, homophobia, and overwhelming responsibility. I give this comic a 4.5 out of 5 and I’m looking forward to what is in store for the Kree/Skrull alliance.

The Last Annihilation: Wiccan and Hulkling #1

The Last Annihilation: Wiccan and Hulkling #1 shows us why these two characters are a strong power couple in the face of adversity despite leading different teams against the Mindless Army.