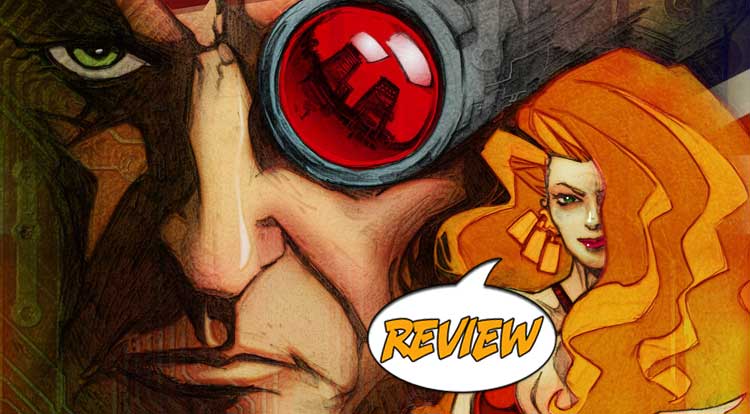 Jon Sherlok is the sole survivor of an enterprise that saw people have implants in their heads to turn their brains into super computers.  It didn’t last…  Your Major Spoilers review of Technofreak #1 from American Mythology Productions awaits!

Previously in Technofreak:  Welcome to London 3026, the grimmest of futures. Cybernetic implants have altered Jon Sherlok’s consciousness and gift him with the ability to hack into any electronic systems, but at a cost; he can feel the edges of his humanity collapsing.

Technofreak #1 opens in a skeevy bar in London called The Limelight, with narration from Maurice the robot cat, who reminds us that he speaks almost entirely in exposition.  Jon Sherlok (whose name actually includes and exponent that I can’t find I way to replicate here) is confronted by an old friend, an enormous man named Neville, who is searching for his lady friend.  The complicated part comes in that fact that Neville’s Loretta used to be Jon’s Loretta, and left him for Neville, ending their friendship.  Their unlikely alliance leads to the home of rich dude Yuri Sakamoto, for whom Loretta apparently left Neville.  Her exes break in to Sakamoto’s headquarters to find that he’s been cloning dozens of Lorettas over and over, The three men slap fight over Loretta, only to have her discover that Yuri has made a clone of her that is as small as he is, leading her to murder him and go back to Jon.  There’s also a second story featuring Maurice the robot cat in an adventure that involves a bomb, some bad dudes, and the sudden revelation that he can create smaller versions of himself.

MAURICE IS THE REAL STAR HERE

There’s a clear influence of 2000 AD in these pages, and the attempt at cynical cyberpunk in a Future Shocks vein bears the clear stamp of its influences.  The bad parts become obvious quite early, though, as the art just isn’t up to the task of aping a Kevin O’Neill or a Frank Quitely.  There are a number of moments with Neville and Jon where it’s impossible to tell who’s who, which is problematic enough, but the juvenile glee with which Loretta’s stripperific outfit (and her naked clones) are rendered makes it worse.  Then Sakamoto appears, and he’s… just horrific.  In several panels, he’s colored bright yellow, which is bad enough, but he’s also short, bulbous and terrifyingly similar to certain WWII-era Japanese propaganda stereotypes.  The first story works a little better, but it’s insistent on calling out its fourth-wall breaks and outrageousness with all the subtlety of an elbow in the ribs.  The second story is better, but even there it’s undermined by self-awareness and general edge lord humor.

Technofreak #1 is a story that was solicited with a proud declaration that it’s not politically correct and every suspicion I had about that statement was borne out by the overtly sexist, openly racist, self-referential and indulgent story, and the attempts to emulate classic British comics is only successful on a surface level, leaving us with 1 out of 5 stars overall.  There may be an audience for this comic book, but based on these pages, I don’t intend to stick around long enough for them to discover it.  I recommend avoiding this one.

I'm not keen on either the art or the story, and the cleverest touches (like Maurice's narration) are also the most self-indulgent, and the portrayal of Sakamoto is just unacceptable.