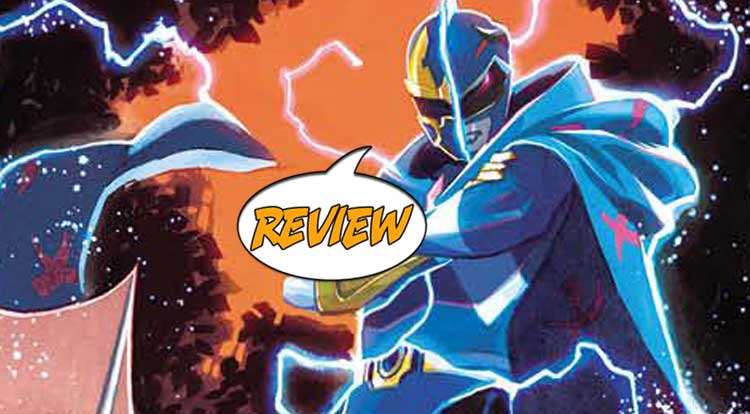 In space… no one can hear you morph.  Your Major Spoilers review of Power Rangers #10 from BOOM! Studios awaits!

Previously in Power Rangers:  Yale, the Omega Rangers’ alien companion, embarks on a solo mission to protect a group of kids from the terrors of Safehaven.  Guided by the voice of the Blue Emissary, Yale will travel closer to his destiny…  but what does this mean for the Omega Rangers?

TALES OF THE ALIEN TIGER

Power Rangers #10 begins some time in the recent past, as Kiya (the rejected blue Omega Ranger) frees Yale (a multi-eyed alien tiger who looks an awful lot like Tommy’s White Tigerzord) from captivity.  She tries to tell the beast that they’re the same, but the cat has no interest in whatever she’s planning, instead setting out across planet Safehaven.  As Yale travels the planet, the voice of the Blue Emissary explains his past, narrating its life as runt of the litter, a harrowing escape from poachers (small enough to escape their traps, Yale was sadly also too small to free his siblings) and the moments that brought him to his current position.  Intertwined with these flashbacks is the story of three young children seeking a hidden temple of the Morphin’ Masters in the hope of finding riches, only to encounter a monster.  That’s where the stories meet, as Yale defends the kids from the monstrous, carnivorous serpent.  Not long after, Yale is led by the voice of the Emissary to the REAL temple, where he discovers the blue Omega Ranger morpher.

“You are the missing piece of the puzzle,” intones the Blue Emissary, which I hope means what I think it means.

DO WE HAVE OUR NEW BLUE RANGER?

The hard part of the Power Rangers’ current epic scale is the fact that Power Rangers #10 (and Mighty Morphin’ #10 before it) don’t really feature any of the Rangers at all.  This issue is interesting, but it almost feels like a palette-cleanser between big issues, and as much as I like the closing scene of Yale (possibly) absorbing Blue Ranger power, I’m also craving more of Jason, Zack and Trini.  That said, this issue works just fine, getting around the problem of having a mute animal as its main character admirably, and setting up for what feels like something big.  The art is a little bit different than what I’m used to, but it has some strong moments throughout the issue.  It’s not always clear what’s happening with Yale, but when alien boy Tu-Vel goes full evil narrator of his story, he suddenly gets dramatic lighting and takes over a quarter page with his hilarious scary story narrative.

Even if Power Rangers #10 diverts from the Omega Rangers for a minute, it works more often than not, and even with some confusing artistic moments, Yale’s story is a compelling one, leading to 3 out of 5 stars overall.  I’m interested in what happens next, but I also suspect that anyone who grabs this issue as a first Power Rangers book or to return after missing a couple of issues is going to be quite confused.

I'm psyched about the idea of an alien tiger as the new Blue Ranger, and the issue is pretty enjoyable about getting there, save for some storytelling confusion here and there.