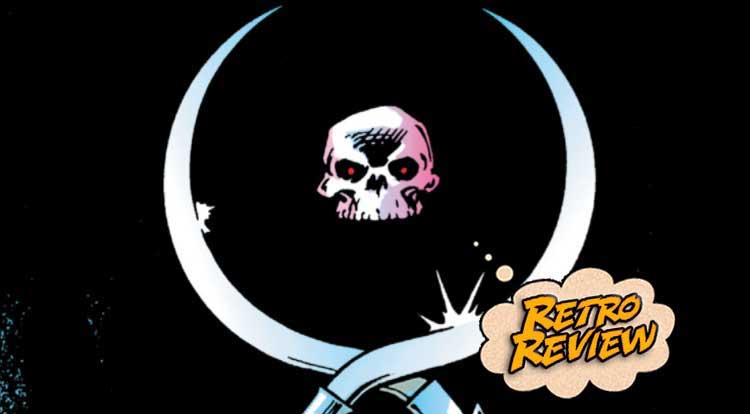 Some say that it’s not out of character for Batman to carry a gun… and they’re not exactly WRONG.  Your Major Spoilers (Retro) Review of Detective Comics #575 awaits!

Previously in Detective Comics:  When the Crisis on Infinite Earths first rebooted the history of the DC Universe, Batman’s history was rewritten, with his new origin streamlining continuity with the four-part Batman: Year One arc by Miller and Mazzuchelli.  When that series ended, DC transitioned directly into a new story by Mike Barr, telling us what happened after Batman established his relationship with the Gotham City Police Department and his rep as a vigilante, which is where this issue kicks off. Batman starts this issue by putting fear into the hearts of superstitious and cowardly petty criminals, frightening (and also pummeling) them with his fists and with his mind.  When one panicky punk stammers that they can take him, because they have guns, a shadowy Dark Knight replies “Guns?  If you’ve put your faith in those…  you’ve already lost.”  Elsewhere in Gotham, we meet the elderly Judson Caspian, returning to Gotham after a prolonged absence to find that his home is still a proverbial hive of scum and villainy.

But he has a cure for that illness… an old cure. This issue’s art is absolutely beautiful in every panel, but the sequence of Caspian returning to action as The Reaper (a masked vigilante who patrolled Gotham in the pre-Batman days, a role which Judson played before Batman but after The Green Lantern in the new streamlined continuity) is absolutely top-notch.  He displays brutal efficiency in killing a series of would-be muggers before heading to Sutter Lane, the heart of Gotham’s new vice trade.  There The Reaper prepares to kill a group of prostitutes, only to encounter The Batman! The old man goads Bats into attacking him, with the young Masked Manhunter thinking that his strikes are doing more damage than they should, only to reveal that The Reaper was feeling out his style, after which he begins to fight back and fight back HARD.  The Reapers steel helmet allows him to disorient Batman with a beautifully drawn headbutt, after with he prepares to dispatch our hero as quickly as he did the thugs. A bleeding Batman is shocked to discover that The Reaper’s scythes also hide high-caliber automatic weapons, barely escaping with his life and making his way back to Wayne Manor, where he collapses in the foyer.  Alfred and Leslie Thompkins (remember her?) patch young Bruce Wayne up and entreat him to rest, to let The Reaper issue lie, but Bruce cannot and will not let him murder his way through Gotham. Having chosen to fight firepower with firepower, Batman has taken the first step down a dangerous path, one that will lead to him making a conscious, on-panel decision to never use guns in the line of duty.  I remember reading this issue back in high school and being absolutely thrilled by the art and the story’s promise of hidden history, but I was super-disappointed when the next issue came out with the art of Todd McFarlane rather than Davis, and I drifted away from Detective Comics soon after, as I didn’t yet grasp McFarlane’s art the way I later would.  Even so, Detective Comics #575 is burned into my brain for its excellent art and the shocking sight of Reaper overpowering his successor, and even if it’s no longer part of the continuity, it’s one of the best single Bat-comics of the era, earning 4.5 out of 5 stars overall.  If you’ve only read Year One, you owe it to yourself to also check out Year Two’s more cohesive story and its more compelling Batman.

A skillful retcon, combined with a well-crafted story and some truly great art, make for a memorable first chapter, one that some people forget since the rest of the arc is the debut of Todd McFarlane.