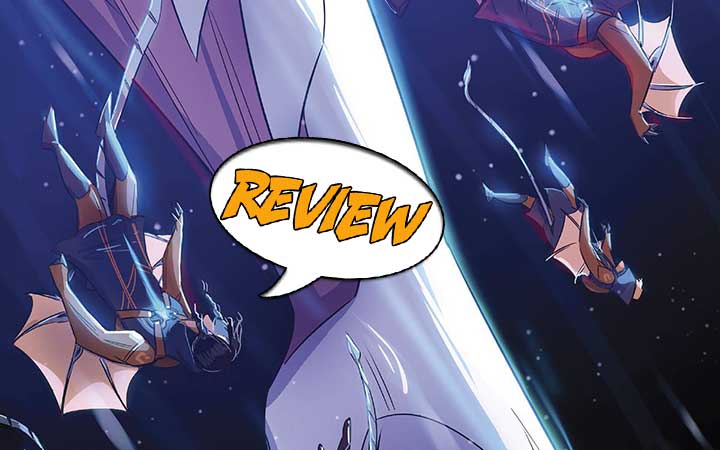 Rangers of the Divide #4 Review

The Cadets and the Commander have a run-in with one of the giants. Will the Commander come clean, and how much will he tell the Cadets? Find out in Rangers of the Divide #4 from Dark Horse Comics!

RANGERS OF THE DIVIDE #4

Previously in Rangers of the Divide: Commander Knight and the handful of Cadets get caught out in a magnetic storm. A lightning strike knocks Elsie and her dragon up into the storm. Knight sees the Squall Owl and follows it, as it is chasing Elsie. He uses his knowledge of floating islands to help Elsie trap it. But while she was out in the storm, Elsie thought she saw a giant down below. Later when she asks the Commander about it, he says she must have been disoriented. Ivan believes her though.

They fly out, this time over broad plains inhabited by huge herds of humffalos (buffalo-resembling creatures). Elsie hears, or maybe just feels, some loud thuds and suddenly they all see the giant, humanoid figure striding across the plains. The Commander orders the Cadets to split up and inwardly hopes they have not been spotted. Elsie asks if it is hostile.

Yes, it is, the Commander tells them, and there is no way to kill a Juggernaut. If they engage with it, they will die. Even as he says this, it screeches to a halt to change direction. It has spotted them. We see Knight think, “It’s happening again,” and he fears they’re all going to die. The Juggernaut focuses on one of the small groups. Knight is ready to depart with the others, but Elsie is determined to find a way to give them a chance to escape.

Juggernauts have very few vulnerable spots, but Knight tells her where they are. Her dragon valiantly fires at it, doing little, if any, damage. At the least, she is distracting it so Knight can get Brandt back up on his dragon and get the other Cadets moving. He has another flashback of his daughter, but then he goes on the offensive, taking over measures to distract it. The Cadets fly up, and I think we get a hint that it notices the souvenir Brandt took from the ruins. The Juggernaut grabs Brandt and his dragon out of the sky, lets them fall to the ground, and strides away.

The group of Cadets gathers and lands. The grief-stricken Bryce turns on the Commander, accusing him of knowing about the Juggernaut and everything else they have run into, leading them on some kind of insane mission and not telling them anything about it. Frankly, she is right, and Elsie turns to the Commander and quietly insists that he be honest with them.

The Juggernaut in Rangers of the Divide #4 adds a distinct challenge to the art. Considering the confined space of the page, not to mention of panels, it is difficult to convey drastic differences in sizes and still keep the characters readable.  I think that having the Cadets flying, so they’re already far above the surface of the world, helps with this since they can start out closer to the Juggernaut’s waist than its feet. For something as huge as it is, it moves quickly and athletically, which is fearsome. This is no lumbering giant; it’s more like a giant sprinter, which is an interesting take.

The design of the Juggernaut is not what one might expect. In keeping with its lithe form, it is covered either with a thin shell of armor, or an armor-plated carapace. This also covers most of its face like a mask, leaving only the mouth exposed. It has no visible eyes although it certainly has very sharp senses and is easily able to detect the Cadets. But with no eyes, it reads as even more monstrous.

Rangers of the Divide #4 finally sets up not only what the Rangers are up against, but finally tells us more about the Commander. He has more reason to be reticent than I was expecting, which is a positive. On the other hand, while Elsie and Bryce are fairly solid characters, the other Cadets still seem to exist primarily to fill up space. If the battle is that impossible, did we really need all of them?

Rangers of the Divide #4

The Cadets come face-to-face with what they are up against, and it is formidable!