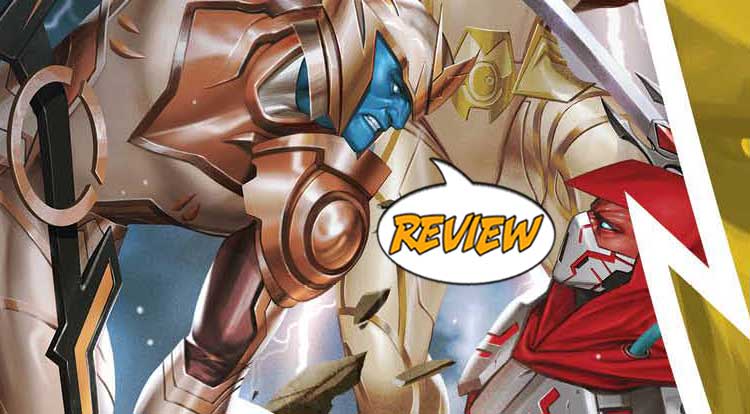 What is the secret of Bandora’s Palace, and what does it have to do with Zordon?  Your Major Spoilers review of Mighty Morphin’ #10 from BOOM! Studios awaits!

Previously in Mighty Morphin’:  When an assassin is sent to disrupt the Eltarian efforts to protect an ancient weapon Zordon is injured in the process and his mentor, Zophram, must make a decision that will alter the future of the Power Rangers as we know it!

IT ALL COMES TO A HEAD

Since the beginning of this volume, we’ve had flashbacks to Zordon’s days on Eltar, ten thousand years ago.  This issue starts with Zophram, the Supreme Guardian and Zordon’s commander, trying to get a decision from the council of Eltar about using the Zeo crystal to finally defang Dark Specter and end the war.  Unfortunately, they’re once again waffling, engaging in endless discussion that leaves him unable to act.  When Dark Specter sends an agent to steal the crystal, Zophram and Zordon are forced to face him in combat.  They acquit themselves well, but their opponent mocks Zophram for always playing by the rules, distracting him and dealing Zordon a fatal dose of poison.  Zophram erupts in rage, mercilessly beating his foe and deciding to confront the council.  When they refuse to let him use the crystal, he once again bursts into a rage, and decides to act…

…only to discover the real danger of the Zeo power.

I’ll admit it: While I’ve enjoyed the Zordon backstory that Might Morphin’ #10 and previous issues have been imparting, I’ve been hoping that it is going somewhere, and this issue’s reveal of Zophram’s fate is the twist I’ve been waiting for.  It makes perfect sense in context, and adds meaning to these flashbacks we’ve been seeing.  Mora’s art supports the drama of the story, and when one of the hooded caretakers showed Zophram his arm, I literally gasped, and the final pages fill in important bits of missing Power Rangers history with horrifying clarity.  The downside comes in the slowness of the first half of the issue, and the slight anticlimax of the ending, as well as some storytelling unclarity surrounding Zartus and Zophram’s location, but it’s still a good comic book.

BOTTOM LINE: IT ALL STARTS TO COME TOGETHER

BOOM’s Power Rangers books have been entertaining from the beginning, but Mighty Morphin’ #10 ups the ante with a twist that I did NOT see coming, and even some stumbles in storytelling don’t completely undermine that, making for a better-than-average 3.5 out of 5 stars overall.  If you’ve lost track of the Mighty Morphin’ squad in the last few months, this issue and the lead-up to issue #12 would be a great place to jump back in.

The story of Zordon's early days takes an alarming turn and reveals that maybe we know Zophram better than we thought we did. That was unexpected.