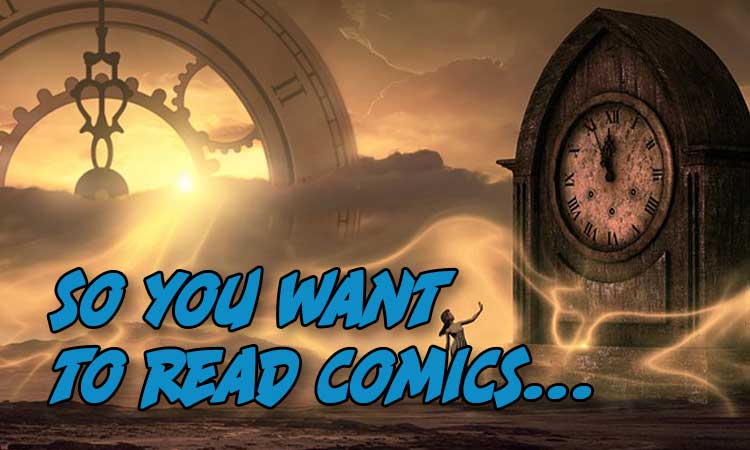 So You Want To Read Comics: Surreal Edition

Look at the time, on your melting clocks, it’s time for “So You Want To Read Comics”, a weekly feature, where we take a look at a single topic and then offer you a pair of comic book recommendations that is new reader friendly, based on that topic.  This week, we’re taking a look at the world of Surrealism.

According to the fine folks at Oxford, surrealism is “a 20th-century avant-garde movement in art and literature which sought to release the creative potential of the unconscious mind, for example by the irrational juxtaposition of images”.  Now, the topic of surrealism is a big one, far too big for this article. But that definition basically sums it up.  Surrealism got its start post-WWI, then names like Salvador Dali and Rene Magritte would push it into popularity from then through the 70s where it truly crossed over into the mainstream consciousness.  Examples of surrealism can be found in all facets of pop culture from around the world.  Some examples include: the works of David Lynch, Salman Rushdie, Haruki Murakami, and Gabriel Garcia Marquez, just to name a few. These surrealistic influences even managed to find their way onto the pages of comic books, just like the ones below.

(Fun fact: The term “surreal” comes from Andre Breton, the person considered the leader of the movement, when he stated that the reason behind the movement was to merge dreams and reality into a super reality, or surreality)

Let’s get into though, here are a couple of comic books, that are great for fans of surrealism both new and experienced with comic books.

You can purchase this collection via the comiXology affiliate link (comixology.sjv.io/zae7qM)

So, when it comes to mind-bending imagery that challenges a person’s perception and interpretation of the world around them, the first name they think of is probably not Nick Fury.  But, that wasn’t always the case.  Beginning as a part of the anthology series Strange Tales, written and drawn by none other than Stan Lee and Jack Kirby, Nick Fury was a pretty standard spy/military comic.  But then the series is handed to a creator named Jim Steranko when things get truly weird.  Jim took the series and then dipped it deep into the stylings of British espionage stories of the time like James Bond and The Avengers (not those Avengers) and threw in a heavy dose of Andy Warhol and Salvador Dali.  This transformed the series into a more unique, expressive, and boundary pushing experience.  These changes helped make the stories told more psychological in nature while not having to skimp on the spy action.  Thankfully, unlike a lot of these older series’ this one has been neatly collected in large volumes that make reading them a breeze.

You can purchase this collection via the comiXology affiliate link (comixology.sjv.io/2rQAYO)

In 1989, DC Comics gave author Neil Gaiman substantial creative freedom over one of their forgotten characters named Sandman.  Neil would take a rather bland vigilante and transform him into a reality bending story staring the personification of Dreams named Morpheus.  His quest to fix his realm after being locked away for decades takes him across the very lands where dreams are made.  As you might guess by this description, that means things get pretty surreal at times.  Also, as you might imagine, a world made up of dreams and based on that dream logic, also has its fair share of nightmares.  This is what The Sandman does well.  It utilizes its surreal imagery to tap into the darker parts of the psyche. This allows it to create a sense of tension, dread, and horror without having to resort to cheap tactics, overly gruesome scenes, or campiness. There’s no shortage of praise that this series has collected over the years, with The Sandman and related titles winning over 26 Eisner Awards and many “Best of” awards at various festivals.  Something to keep in mind though, this is an immensely popular book and this has led to DC Comics having reprinted this series many times, with extras and “enhancements”, some of these can make things a little confusing. Try to stick with basic collections.