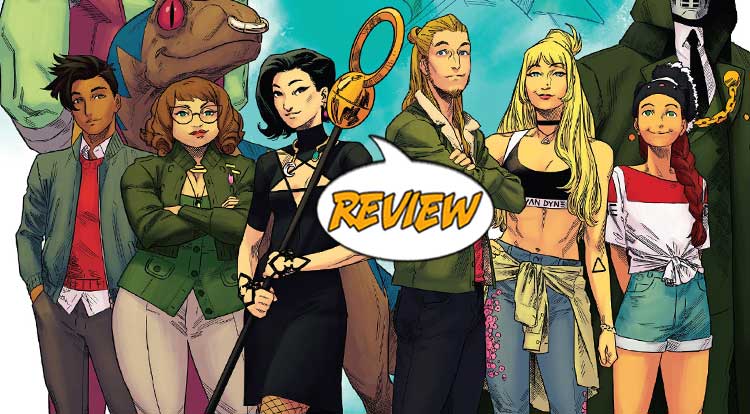 Believe it or not, it’s the Runaways 100th issue!  Your Major Spoilers review of Runaways #38 from Marvel Comics awaits! Previously in Runaways: The Runaways are 18 years old!  They’ve been through hell, literally, traveled in time, defeated their own parents and even got some of their number through high school, but things are about to get even twistier for our favorite team of juvenile delinquents.

As Runaways #38 opens, Nico and Karolina’s makeout session is interrupted by the rising sun…  even though it’s still the middle of the night.  Only one of them is surprised to find that it’s a spacecraft, containing more of Karolina’s people, the Majesdanians, who have come to help her.  When Nico insists on knowing who the hell invited them, she’s surprised to find Karolina admit… it was her.  At the same time, Gert is stuck in a love triangle with herself, as the Gert from the future has returned and has a desperate mission to save the future, one that means that she has to take Chase with her!  Future Gert can’t give specifics, but she has come back to “the last time we were all happy” to give Chase a chance to avoid a terrible fate.  As they wrestle with the question of whether or not to allow her to take their friend, the team is suddenly ambushed by Gert’s evil time-traveling parents, causing Nico to use her powers, casting a powerful spell that disrupts their time travel…

Runaways #38 seems to have at its core a back-and-forth question of whether they’re going to lose Chase or lose Karolina, but the resolution of the plot is unexpected for me.  Equally unexpected are the TWO separate epilogues promising conflicts to come, promising the return of both Xavin and founding Runaways traitor Alex Wilder.  I remember the first issues of Runaways when they first came out, and I have to say that I’m pleasantly surprised to still be reading this book nearly two decades later.  Better still, it looks incredibly good, with Genolet providing some of the best art in the titles history, right up there with Kris Anka’s work.  This issue’s plotting is excellent, managing to surprise me on a number of occasions and providing some truly lovely moments of character interaction.  (I particularly love Nico’s distasteful response when Mrs. Stein mistakes her for her own late mother, but the tender moments between unexpected team members also qualify.)

In short, Runaways #38 both looks good and makes for a very exciting read, delivering some appropriate and unexpected swerves, even for a book known for the big twists, delivering a new status quo for the next hundred issues and earning 4 out of 5 stars overall.  There’s always a worry that a book about young people will be embarrassing and dated, but this one doesn’t feel like a Steve Buscemi moment, instead delivering on sweet/terrifying/exciting moments on every page.  It’s good stuff.

The Runaways team has never been afraid of the big shocks, but this issue pulls of TWO massive swerves with gorgeous art and an ending that worries me terribly. What's not to love?