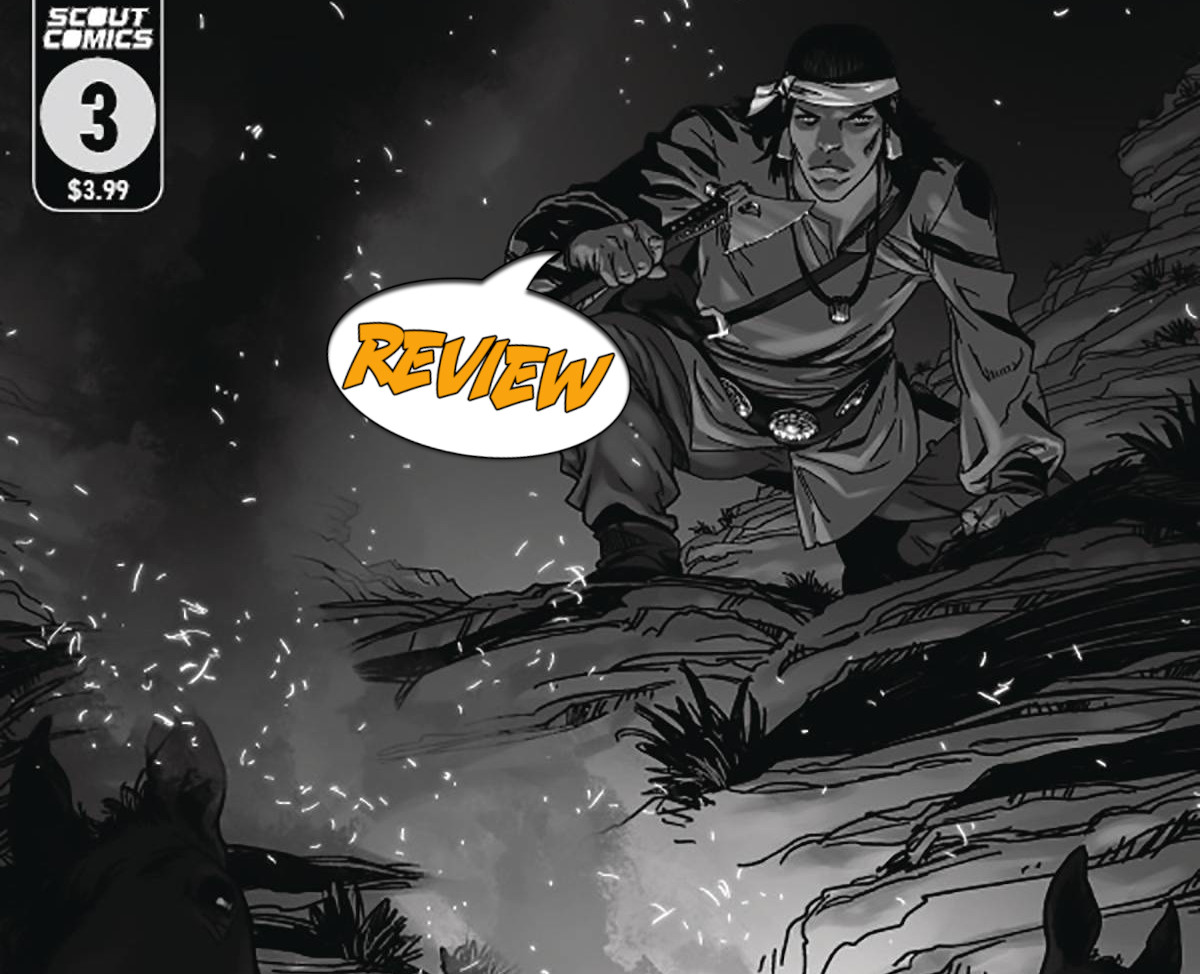 Follow the Navajo adventurer Ata’halne as he explores the supernatural events of the wild west in Midnight Western Theatre #3 by Scout Comics! Previously in Midnight Western Theatre: Ortensia Thomas and Alexander are traveling the wild west doing all sorts of jobs and are shrouded in mystery. Alexander is a vampire but not much is known yet about the woman in black.

A NEW POINT OF VIEW

Midnight Western Theatre #3 has us taking the perspective of Ata’halne who is telling a story to a group of children. Once, Ata’halne was traveling the desert after his horse died and encountered a shaman who told him to find his destiny by hunting a skin-walker. He traveled to try and get more information and found a forest. In that darkness, he saw the Skinwalker staring at the moon but was caught off guard by the monster’s strength. He was taken, unharmed, to a cave where he first met Alexander who proceeded to fight the skin-walker. Ata’halne was caught in the middle of the fight and would of died if Ortensia didn’t pull him to safety and tell him to run. The lesson he tells the children is that destiny would find them, and he should not go out and find destiny.

Midnight Western Theatre does not take a standard narrative arc. We jump timelines consistently and point of views fairly often without a cohesive glue to bring everything together. I don’t get it. I find myself trying to put together these story pieces, but we just don’t get enough information. Or there is a thematic element or a genre expectation that I am unaware of. My interest in this miniseries is just trying to figure out what the creative team is trying to tell me.

In this issue, Ata’halne deals with a theme of destiny. When he met Ortensia and Alexander, he tried to find his destiny rather than letting destiny find him. As an older man, he realized that he if kept fighting the skin-walker he would have died. He never would have fell in love or become a father. It was smarter for him to be patient then rash and that is a good lesson for everyone to learn.

BOTTOM LINE: IT IS DIFFERENT

Midnight Western Theatre #3 is different. You are not getting your standard narrative arc nor a consistent point of view. I have a hunch that this reads better in a trade paperback where you can get all the information of the story at once rather than in individual issues. But on its own, I’ll have to give this comic 3 out of 5. The art is solid, and I am interested to see how this will all wrap up.

Midnight Western Theatre #3 gives us a new perspective that gives us more questions then answers.