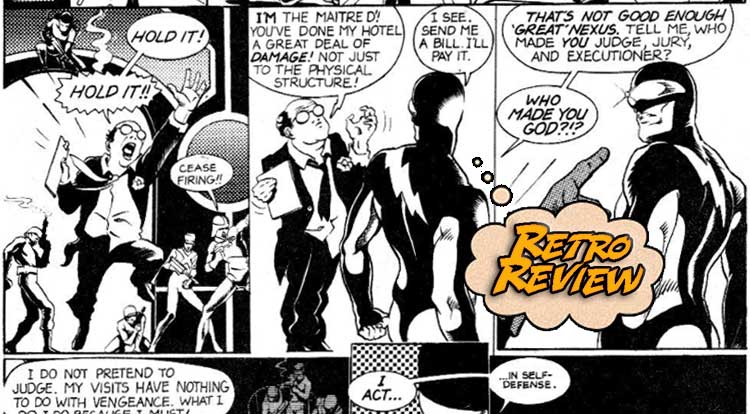 The independent comics boom of the 1980s brought a lot of new characters into comics.  Some were good, some were bad, some were turtles, but only one was a cosmic executioner in the best costume of the decade.  Your Major Spoilers (Retro) Review of Nexus #1 awaits!

Previously in Nexus:  Before Diamond was the only game in town, there were several other comic book distributors in the game.  One of them was Capital City Distribution, out of Wisconsin, which was responsible for some of the earliest comics I ever bought.  For a few years in the early ’80s, they also printed comics of their own, including Mike Baron’s Badger and Whisper, by Steven Grant and Rich Larson.  Their most successful title, though, last a whopping three issues at Capital before transitioning over to First Comics where it went another hundred-plus issues over the next two decades.  The three Capital Comics issues of Nexus are magazine-size black-and-white albums rather than standard comic book size, opening on the moon of Ylum in the year 2481, as we see a man floating in a strange chemical bath, dreaming of murder. Having seen a vision of terrible crimes, Nexus sets out in the name of revenge, while his retinue cheers him on his way.  Rude’s art here doesn’t really resemble the stylized animation-inspired work that it would become, but this issue’s appearances of Nexus have a lot more of Toth’s Space Ghost design that I remember seeing when I initially read this book years ago.  Nexus flies directly to planet Konstantynow, where the nefarious Colonel Gonzalez y Vega has gone to ground, cutting through the dictator’s security team without the slightest effort. With his target dead, Nexus prepares to leave, only to have a guest confront him about his actions, demanding to know who made him judge.  “I act… in self-defense,” replies the executioner, setting course for Ylum once more.  Several weeks later, a reporter named Sundra Peale arrives to interview him about the murder of Colonel Gonzalez, but he refuses to speak with her.  Instead, she speaks with the other inhabitants of Ylum, including Dave the Thune, who explains how he escaped from oppression thanks to Nexus, telling her of the power of his dreams, but refusing to elaborate.  Then, another ship arrives and hails the moon. Nexus greets his “guest,” Sutta leBerq, who offers him a strange deal: leBerq can keep Nexus from ever dreaming again, but in return, Nexus must agree to murder one sentient being of leBerq’s choosing. At the sound of the name, a refugee name Giz begins shouting, encouraging the mighty Nexus to kill the monster. only to be shouted down by the…  I guess I don’t want to say hero.  So, he gets shouted down by the protagonist, I guess.  Either way, Nexus retires to his chamber to think about the offer, spending three whole days in his quarters considering the offer, only to emerge with a definitive answer. This issue ends with an unexpected and intriguing moment, but given that we started this issue with the main character murdering someone on-panel, we already knew that Nexus wasn’t your standard ranch stash.  Nexus #1 has the beginnings of the complex socio-political madness that defines Baron’s futuristic reality, with a young Steve Rude improving with every page, making for a fascinating experience for readers like me who are more familiar with where Nexus ends up, earning 3 out of 5 stars overall.  The seeds are sown here for Sundra to discover the truth about Nexus’ identity, the reveal of how and why he gets his visions of murder and what powers him, but for now, it’s all a strange and evocative new world that drags the reader in, despite it’s layers of complexity.

A young Steve Rude isn't quite the draftsman he'll become, but it's still interesting to see how Space Ghost inspired the designs are, and the story sets up nearly everything to come in next hundred issues.