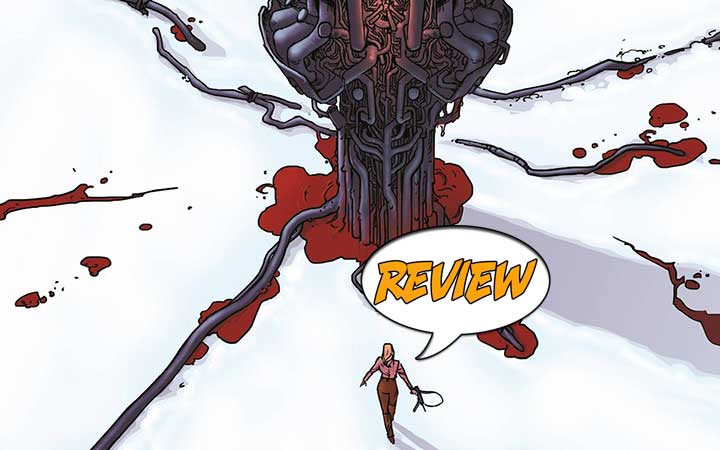 Madness descends on the Antarctic base. Is this all because of Die Glocke? And can it be stopped? Find out in The Secret Land #3 from Dark Horse Comics!

Previously in The Secret Land: In the aftermath of WWII, Katherine is a spy embedded with the Nazis, now at a secret base in Antarctica. Ben, the love of her life, believes she is dead until she gets a message through, and the government brings him in to vouch for it. When they ask if he will join a mission to Antarctica, he jumps at the chance. At the secret base, the device called Die Glocke is working, although Professor Hesse does not understand how. And ever since it started, the mood at the base has been uneasy. Hesse’s lab assistant tears out his own eyes. At the General’s orders, serfs are regularly killed and often tortured. There is news of an approaching fleet – and now he is looking for the traitor!

The Secret Land #3 opens in the chaos that ensues when Julia claims to have been the spy, and suddenly bloody monsters erupt from the walls. Between them and soldiers with guns, a lot of people die. Katherine realizes that Julia must be Soviet. Perhaps the fleet is Russian and not the American one she was hoping for, but if they could get her off the base…

The American fleet gets word of the Russian fleet. Ben can feel Kat’s desperation and asks for permission to do a small recon mission. His request is denied.

Oberst grabs the Professor and insists he must save the reactor. Hesse in turn insists it must be shut down. Oberst threatens to shoot him for treason if he tries. He shouts that he must have order while all around him, dead men are turning into unearthly monsters.

Kat saves Julia from a monster. Julia, still thinking she is German, threatens her. Kat identifies herself as American and the two women become allies of a sort and head for the reactor.

The General sent out planes to attack the fleet, and indeed there is a fight going on at sea. On the periphery of this, Ben has put together a small group of men who were willing to come on an unsanctioned mission with him. He has no true plan beyond following the planes back to wherever they came from.

Kat explains to Julia that Die Glocke supposedly pulled its energy from “between the spheres,” and perhaps that is where the monsters have been coming from. She stays quiet about her sense of growing insanity, and the persistent sound of tinkling bells that she hears. They reach the reactor room which has its own share of monsters. Julia holds them off as Kat goes to power off the reactor, and instead is apparently drawn through a portal.

This sets off a strange, unearthly noise. Outside the base, Ben feels Kat’s presence suddenly vanish. He and his men find a way into the base. They run into Hesse and prevent him from being consumed by a monster. He insists he has to shut down the reactor before it turns reality inside out. And he wants to find his assistant. And Ben remembers that this was Kat’s cover.

The art of The Secret Land #3 illustrates how the Antarctic base descends quickly into very Lovecraftian death and horror. Between the bodies, the body horror, and the monsters, it is quite chaotic. I think it is some interesting symbolism that the red of the blood and monsters is the same red as the Nazi flag. The fight immediately spreads among everyone even before Soviets or Americans arrive. It’s fast and visceral, and at times it is a little hard to follow.

Kat and Julia became friends before, mainly by virtue of being some of the few women at the base. I like when they meet again here. Julia knows her way around weapons and is as fearless as a spy in this kind of situation would have to be, but the monsters are a lot, especially when she runs out of ammunition. Kat dispatches the monster and looks at Julia coolly. Julia gives her fair warning that she is not really a friend; she can be as cool as Kat. When Kat explains who she is, we get the classic scene of Julia shooting toward her, but actually at the monster coming up from behind her. They’re even, and they’re on a new footing, and we can feel their strength.

BOTTOM LINE: COMPLICATIONS AT THE END OF THE WORLD

The Secret Land #3 is fast-paced, bloody, and creepy. Horror, madness, and espionage blend surprisingly well, and adding the Russians into the mix adds some interesting complications.

Monstrous chaos breaks out at the Antarctic base as Ben tries to find Kat.