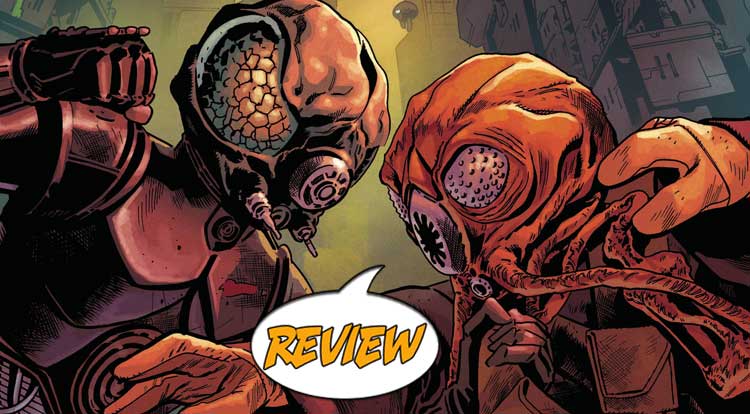 They’ve always been an unstoppable bounty hunting team… until now.  Your Major Spoilers review of Star Wars: War of the Bounty Hunters – 4-LOM and Zuckuss #1 from Marvel Comics awaits!

Previously in Star Wars: War of the Bounty Hunters:  Together, lethal droid 4-LOM and Gand Findsman Zuckuss make an unparalleled bounty hunting team.  Yet a brutal battle with Boba Fett has divided them.  Lost and alone on the crime-infested streets of Nar Shaddaa, Zuckuss faces down an utterly transformed 4-LOM… but why is his old friend out for blood?  The answer may lie in the past, from an early mission that helped forge their formidable partnership!

After an encounter with Boba Fett went bad, the droid 4-LOM was blown up and his head stolen by Fett.  4-LOM’s partner Zuckuss was badly wounded, barely staggering to the hidden speakeasy of his pirate lemur friend, Trot, where he tells the story of his recent misfortunes.  He also flashes back to the first time he and 4-LOM worked together, combining his strange mystical powers with the droid’s skills to make an unbeatable team, bringing in the wicked Dr. Cribiriz.  They killed him and split the bounty, but somehow Cribiriz has returned, buying 4-LOM’s head from Jawas and installing it on a Wild Wild West-style robot spider.  Zuckuss, Trot and some friends fight off the attack, freeing 4-LOM from Cribiriz mind-control, with Zuckuss taking out the villain for real this time, but as the issue ends, Zuckuss is crushed when his old friend runs away for reasons unknown.

REMEMBER THEM FROM ‘THE EMPIRE STRIKES BACK?’

Okay, fair warning: This is a comic book for hardcore Star Wars fans, delving deep into the lore of the original trilogy and giving us a lot of visual and conceptual callbacks.  The alien known briefly as Hammerhead (or one of his people) appears, as do many Tatooine landmarks and races.  There’s some wild, weird art to be found in here, though I’m not clear if all the aliens in play are established Star Wars races.  The art is actually much more stylized than I’m used to in a licensed comic, with elements of Kevin Nowlan here and there, and a lot of interesting linework to convey the dirty, used-up nature of the Skywalkers’ home world.  The plot is likewise pretty solid, reminding me of a western much as The Mandalorian did, with Zuckuss’ desire to save his pal making for some unexpectedly emotional underpinnings to the tale, and it’s nice to see someone in the galaxy far, far away who isn’t willing to immediately betray his old friends.

Lookin’ at you, Lando.

The big crossover allows Star Wars: War of the Bounty Hunters – 4-LOM and Zuckuss #1 to delve deep into the lore and deliver unexpectedly moving drama about a toaster and a bumblebee who are best friends, with strong art pulling readers along even if they haven’t been reading the whole series, earning 3 out of 5 stars overall.  My usual adaptation comic caveat that you’ll get the most out of this if you’re already a devoted fan of the property stands, but even with a more limited context for the story, I enjoyed what this book delivered.

Also, I’m pretty sure one of the aliens was Dr. Jumba Jookiba from Lilo & Stitch.

It's a melodramatic story that feels like a spaghetti western in all the right ways, but still has some confusing bits that don't quite land. I like the basic bones of the story a lot.