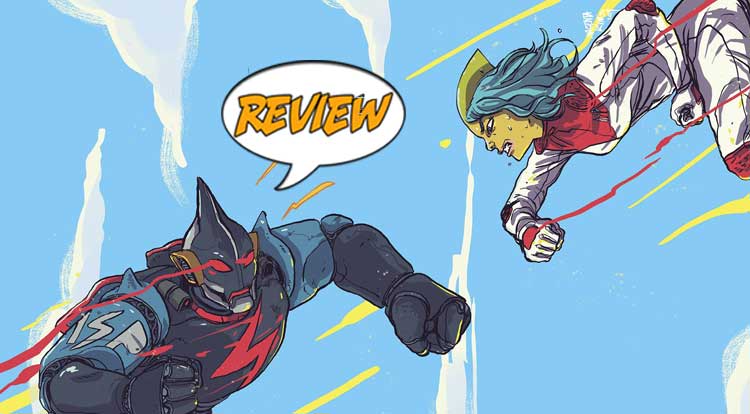 Jenny Zero has accepted her powers and role as protector, but is she ready for Mecha Commander One?  (Spoilers: No.)  Your Major Spoilers review of Jenny Zero #4 from Dark Horse Comics awaits!

Previously in Jenny Zero:  It’s a giant Jenny Zero with a helluva buzz versus a gargantuan robo-mech manned by the Action Science Police in the biggest fight this side of Godzilla… and the winner takes ALL!  The secret of “Dean Martin” the dog is revealed as the ultimate battle wages for the most prized possession on Earth: Jenny’s life!

TIME FOR THE FIGHTIN’!

Now officially wearing fighting togs that will grow with her and not leave her starkers over the city, Jenny Zero prepares to face down the forces of A.S.P., starting by making a free throw… with a tank.  She easily takes care of the mundane machines that are trying to bring her down, but even her buzzed brain knows that the tide has changed when a giant robot arrives and declares her under arrest.  Mecha Commander One quickly gains the upper hand, beating her mercilessly, only to have Jenny mock their power by calling them “mayonnaise boy.”  Before she can be defeated, though, her dog, Dean Martin, arrives, also at giant size (!!), evening the scales and ripping the arm of MC-One.  Jenny is then able to score the coup de grace, leading to the most unexpected moment so far in the series, and one that left me truly shocked.

There are a few issues with the storytelling in Jenny Zero #4 that are bothersome for me, but perhaps the most critical is an early miscoloring of Jenny’s costume as purple, which is not only puzzling but makes it hard to follow the first volleys of the battle, since she’s being attacked by a man in a purple costume.  There’s also the matter of WHY all of this is happening, which isn’t entirely clear even having read the previous issues.  That said, it’s an enjoyable, violent romp throughout most of the issue, and King’s art makes up for more than a few flaws in sheer exuberance and colorful explosive joy.  The last page reveal is one that really caught me off guard, as well, making me hope that this isn’t the end of Jenny Zero (even though I believe it’s the end of this particular volume).  It’s one of those cases where I don’t want to reveal too much, because the swerve works quite well, but suffice to say, I firmly hope there’s more J.Z. in our future.

In short, Jenny Zero #4 is big, bold broad-strokes action, and the strength and momentum of that drunken battle sequence is such that it carries past a few problematic moments into better-than-average territory, earning 3.5 out of 5 stars overall.  I’m hoping there’s more Jenny Zero coming, but even if not, it’s a mostly successful love story to to Ultraman, Godzilla and kaiju stories past, and manages to shake even a genre-savvy nerd like me out of my complacency with it’s unexpected twists and turns.

This issue wraps up the first arc with violence, drama, sake and an ending that I DID NOT see coming, making me want more of this book right away.