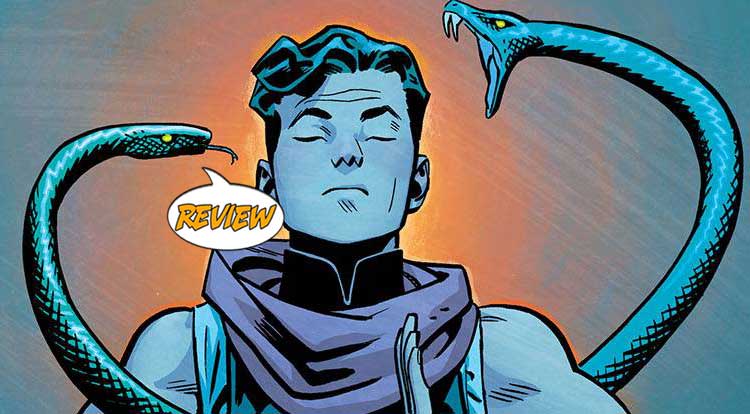 The Johnson family is home safe, but things are absolutely NOT back to normal.  Your Major Spoilers review of Fire Power #14 from Image Comics awaits!

Previously in Fire Power:  Owen thought he and his family could return to their normal lives, but the Serpent’s Omen is called that for a reason!

YOU CAN’T FORCE IT

Fire Power #14 opens at the Johnson household as Owen and Kellie clean the dishes and discuss their kids’ lives (which also provides a truly lovely way to give us the exposition).  Doug won a fight with THREE older boys who jumped him, while daughter Haley is frustrated that she can’t get her own fire power to come back again. Owen tries to help her deal with her anger, while his mentor deals with a frightening development with imprisoned villain Wei Lun.  When the Serpent’s omen attacks Haley, Kellie saves her, only to find herself under attack.  They are saved from the snakes-turned-into-an-expert-martial-artist by an unidentified woman…  a woman who turned out to be Kellie’s husband’s ex, Ling Zen.

Also, something bad has happened to Master Zul.

It’s very hard for any story to compete with the beauty of Chris Samnee’s art, but this issue’s developments manage to do better than most could.  Kirkman knows just how to advance his plot’s multiple moving parts in the correct order to keep readers off-balance, while Samnee makes doing dishes as exciting as fighting evil ninjers.  The coloring is also excellent, with the bulk of this issue’s kick-punching action taking place outside the Johnson home at night.  Under a less talented creative team, it could have ended up too dark and muddy, but this issue gives us a stylish and well-drawn series of pages with a muted blue color palette that makes it all look clear, while also making it obvious that it’s dark.  The ultra-creepy final page of Zul, with glowing eyes and snakes possessing him, is a perfect cliffhanger point, and it once again shows how talented Samnee is and how a minimalist approach can still make for engaging comics.

For me, the biggest problem with Fire Power #14 is the wait for next issue, which is promised to be “all snakes” (which is probably not an exaggeration, given this creative team), and makes me wish I could read it right away, as this issue earned 4.5 out of 5 stars overall.  The best part of reading Fire Power is how good it is to see a talented, experienced creative team doing something unique that they clearly feel strongly about, which makes every issue exciting to read.  If you’ve been sleeping on Fire Power, you are missing out.

A combination of quiet family drama and kung-fu action, held together with a clever script and truly amazing art, making for a really good comic.