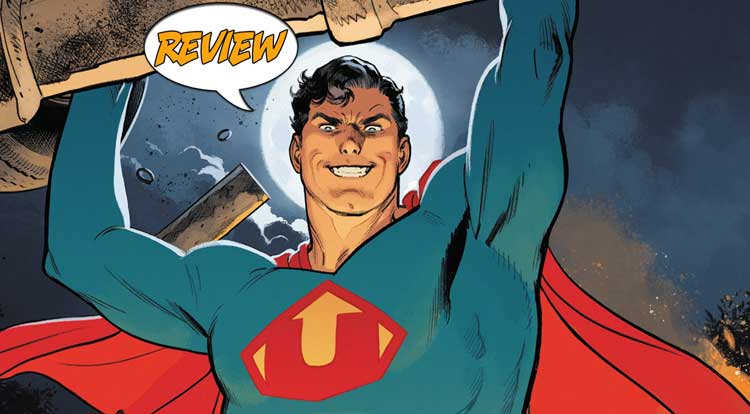 Earth-3’s last son of Krypton has just met his long-lost cousin Kara…  but on this world, she kinda wants to kill him.  Your Major Spoilers review of Crime Syndicate #6 from DC Comics awaits!

Previously in Crime Syndicate:  Look, up in the sky!  It’s a bird!  It’s a plane!  It’s… Ultragirl?  That’s right, folks, Kara Zor-El of Earth-3 arrives, and it’s far from a happy family reunion!  Can Ultraman take his cousin down and reclaim his place as the true last survivor of Krypton?  Meanwhile, on a hidden island in the Pacific, Emerald Knight must finally decide: Will he stand with the Legion of Justice?  Or will he give in to the Crime Syndicate?

Johnny Quick is dead, and the assault of Luthor’s Legion of Justice has ended badly for most of them.  Sinestro, Superwoman, and Emerald Knight (Earth-3’s John Stewart) have crashed to Earth together, while the rest of the Syndicate is overwhelmed by the sight of Ultraman and Ultragirl beating the Kryptonian heck out of each other.  He seems genuinely hurt to know that his cousin never announced herself to him, but she’s more focused on his failure as savior of the world.  Emerald Knight and Sinestro seem to have Superwoman under control, until she reveals that she has crashed them on her home, Demon Island.  They are immediately surrounded by Amazons, but the ring-slinger kills them all in one attack.  Superwoman responds by ripping off his ring finger and depowering him, only for Sinestro to put her in chains, only to be immediately double-crossed and murdered by Emerald Knight.  As for the last survivors of the House of El, their battle rages until Ultragirl collapses, as blood spurts from her nose.

This issue features murder after murder after murder, and ends with a realigned Crime Syndicate ready to be evil once more, with each member distrusting the others for their various lethal actions during the series.  I’m not sure what this is all setting up for, to be honest, but it ends on such an ambiguous note that I have to hope that they’re intentionally preparing for a follow-up, otherwise this issue’s betrayal and back-stabbing will feel even hollower.  I enjoy the art of Kieran McKeown well enough, especially when it comes to dynamic battle poses, but there’s an indistinctness that creeps into the wide shots the is less attractive.  Still, the deftness of the cityscapes and vehicles is undeniable, which helps to make up for some of those problems.  Still, you have to appreciate any comic book that contains the phrase “Alexander Luthor was a dumbass”, since I’ve believed that since 1961 or so.

There’s a lot to like in Crime Syndicate #6, but it falls victim not only to the alternate universe “nothing matters and anyone could die at any moment” problem and the difficulties of having irredeemable monsters as protagonists, but still closes things out reasonably well, if more ambiguously than I’d have liked, for 2.5 out of 5 stars overall.  Here’s hoping this new Syndicate status quo shows up again sooner rather than later.

There's a lot of build-up to what feels like an anticlimax here, but some of it is pretty interesting stuff, and if followed up on, it could make for some great drama with this new Crime Syndicate. Here's hoping.