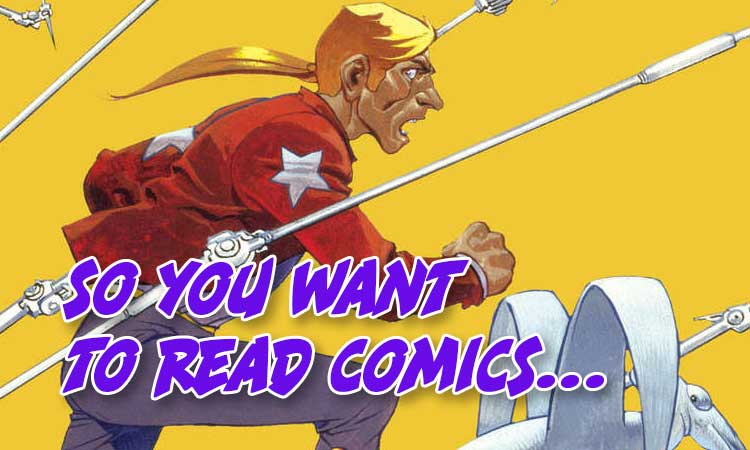 So You Want To Read Comics: Dune Edition

Have no fear (fear is the mind killer), it’s time for “So You Want To Read Comics”, our weekly feature where we take a look at a single topic, then offer a pair of comic book recommendations, perfect for new readers, based on that topic.  This week we’re taking a look at the Sci-Fi classic, Dune.

Back in August, 1965 a book, that began its life as an article about desert shrubs, hit the shelves that would go on to be one of the most celebrated and beloved novels of not only the science fiction genre, but of literature as a whole.  Dune’s tale of Paul Atredies’ struggles against a corrupt empire, a bloodthirsty rival family, and a planet whose every grain of sand seems intent on killing him, have enticed readers for decades.  This combined with themes of environmentalism, mysticism, the struggle against determinism, medieval style blood drama, with touches of altered consciousness have proven to be not only enduring but consistently financially successful.  Dune has sold nearly 20 million copies making it one of the best selling science fiction novels of all time, it also was the recipient of both the Nebula Award and Hugo Award.  And, that’s jus the first installment of this series, which would go on to have contain 19 different novels.

But, you probably knew all that.  So let’s get on to the recommendations.

Considering the popularity of the original Dune, and it’s follow-ups, you could probably throw a rock in a bookstore and hit something inspired by or similar to Dune (don’t actually do this). Properties like Robotech, Warhammer: 40,000, and even Star Wars all have similar themes or plot devices.  But what is a bit rarer, is finding the themes of Dune presented in a funny, and even kid friendly way.  But that’s what you get with Drive.  Drive is a webcomic that tells the epic story of human empire, built upon tech that isn’t theirs, facing a massive war, who’s only hope is a small alien who can navigate spaceships in ways no one else can.  All the elements of Dune are there, large family/bloodline drama, a galactic scale, a struggle over a precious resource, and a main character who can perceive the universe differently.  Plus, there’s funny jokes and cute animals. You really can’t go wrong.  As an added benefit, this is still an ongoing webcomic that’s free to read. So, after reading the collections you can stay up to date and read as this story unfolds.

Time for a little story.  Back in the 1970s a group, led by film director Alejandro Jodorowsky, set out to create the first film adaptation of Dune.  This group included the likes of: Jean “Moebius” Giraud, H.R. Giger, Salvador Dali, Mick Jagger, Orson Wells, and Pink Floyd, among others.  Now, this film ultimately did not get made (there’s a documentary about it called Jodorowsky’s Dune), but the work that was done managed to find its way into other properties including: Star Wars, Alien, Indiana Jones, and this particular graphic novel.  Using the concept art and a lot of the storyboard art they had prepared for Dune, Jodorowsky and Moebius put together The Incal.  This story revolves around a P.I. named John Difool, a powerful crystal for which the book gets its namesake, and a massive struggle for said crystal.  The story is big, it’s trippy, it has a lot of players, and it’s a lot of fun to look at what’s in this graphic novel and imagine how what you’re looking at was at one point parts of Dune.

What did you think of these recommendations? Do you have some suggestions of your own?  Let us know in the comment section below.