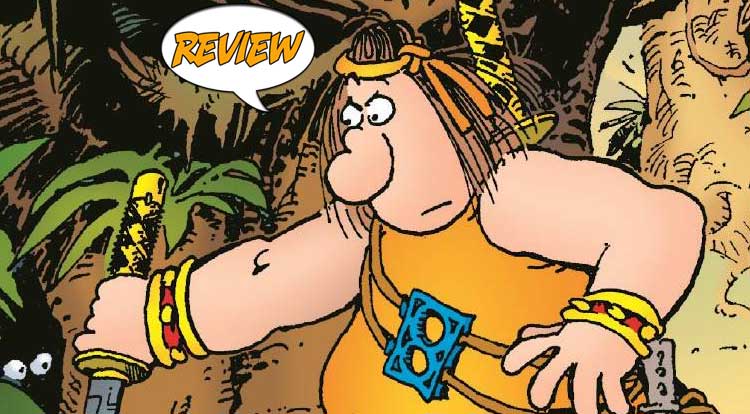 The Lord of the Jungle meets the Master of the Cheese Dip!  Your Major Spoilers review of Groo Meets Tarzan #1 from Dark Horse Comics awaits! Previously in Groo Meets Tarzan:  The team behind the hit Groo the Wanderer series goes to Comic-Con, finding inspiration not only in their enthusiastic fans but in their fellow creators, too-especially those working on Tarzan comics.  Sergio Aragonés finds a way to introduce the two characters to each other, and so Tarzan, the lord of the jungle, is set on a path that will lead him to Groo, the master of cheese dip.

Also includes the return of the Rufferto backup strips!

“ONE DAY AT THE 2021 COMIC-CON THAT NEVER HAPPENED”

Our story begins at a convention that never happened, with a funny sequence that has the creators of Groo dealing with cosplayers, crowds and mistaken identities.  (Evanier didn’t write Kingdom Come, and Sergio didn’t draw Spy Vs. Spy.)  They make a panel appearance talking about how their upcoming Groo/Tarzan comic is going to be amazing, with Sergio returning to his room that night to dream the story.  We start with Tarzan being called upon to help fight off a group of slave-traders in the land of Pal-Ul-Don.  At the same time, Groo wanders into a village that sends him off on a fool’s errand for cheese dip to save their city from destruction.  Lord Greystoke and Groo end up on opposite sides of the same mountain, but the issue ends by cutting back to Mark and Sergio, visiting the dilapidated Chula Vista Jungle Safari Land, where they run afoul of a real lion!

ALL A DREAM, AND THAT’S OKAY

One of the things that decides whether or not I believe a crossover narrative is the device used to make it all happen, and Groo Meets Conan #1 uses perhaps the most genius of all: It’s all a comic-book crossover.  That doesn’t change the quality of the material, though, as the Yeates Tarzan pages are just plain gorgeous throughout, with lush colors that really complete the visuals.  Aragonés likewise does his usual brilliant work (a two-page spread of Comic-Con is chockful of visual gags and hilarity), but as with Groo Vs. Conan not so long ago, it’s kind of a miracle that the two styles work together.  This issue stops short of actually having the legendary heroes meet, which is something of a disappointment for me, and the interplay of the “real world” story with the Groo/Tarzan story is a bit distracting for me, even though it’s funny.

That said, I still enjoyed reading Groo Meets Tarzan #1 greatly, enjoying the 4th decade of running gags with the knowledge that the Burroughs estate probably only okayed this because it’s clearly an imaginary story, and having a lot of fun with the divergent art styles, all boiling down to 3.5 out of 5 stars overall.  It’s a good first issue that will probably read more smoothly as the first chapter of the inevitable trade paperback, but it’s got undeniable charm.

Every good crossover needs a hook, and this one has Sergio and Mark at Comic-Con? Soooo, that's something.