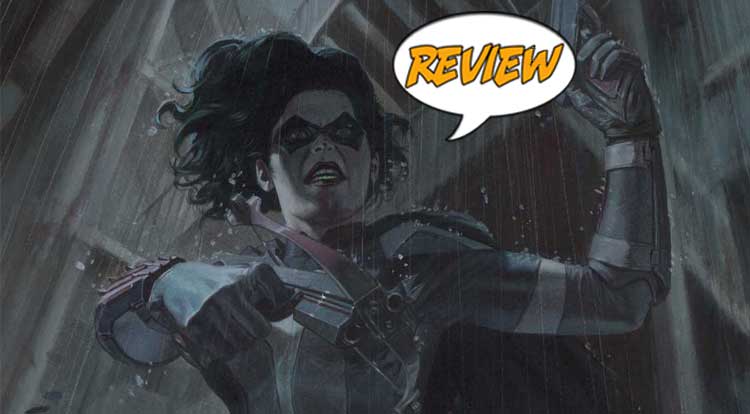 Gotham’s citizens are infected by Hue Vile, and only the Huntress can help… if she’s not infected herself!  Your Major Spoilers review of Batman: Secret Files – Huntress #1 from DC Comics awaits!

Previously in Batman: Secret Files – Huntress:  Gotham’s Violet Vengeance lived through a lot in the last few weeks… including her brain being invaded by a violent parasite bent on sending her on a deadly slugfest bender.  Not fun, amiright?   Well, Helena Bertinelli is no one to mess with and when the villainous Vile’s parasite gives her the ability to see through the eyes of his victims?  You best believe she’s gonna track him down and pop an arrow in that slimeball.

Look out, Batman, Huntress is on the prowl…

BRAIN PARASITES: NOT A GOOD TIME

After facing down a horrific villain named Hue Vile, getting possessed by his brain parasites and trying to kill Batman, Helena Bertinelli woke up in the hospital.   Foolishly, she immediately split, heading for home, where she figures she can just sleep off her recovery.  Sleep is interrupted by dreams of Vile’s victims, but she quickly realizes that she hasn’t seen them before.  Somehow, her infection has left her with the ability to see through the eyes of other victims of Vile’s brain parasites, and naturally, that sends her back out to save them, even though she’s injured and dehydrated.  Huntress takes down would-be killer after would-be killer, until finally Vile speaks to her through one of his victims.  She vows to take him down, but when she tries to connect once more, she suddenly curses out loud, and calls Oracle for assistance, as things are about to get much, MUCH worse.

“I CAN HEAR THEIR VICTIMS CRYING FOR HELP.”

I haven’t been following Gotham City goings on very closely of late, but I sincerely hope that this issue is what they’re all like.  Lapham’s art is nuanced and extremely expressive, which helps to sell the wide-eyed madness of Vile’s “flesh mob”, and all the motorcycle scenes are excellent.  The downside of this comic is that it’s pretty much all action, but even that doesn’t hurt the reading experience at all.  I am a bit disappointed to find the story picking up from and heading right back into other Bat-books, the truly shocking last page reveal makes me want to follow this story.  Huntress knows that she’s a creature of violence, and she’s going to take that violence right to Hue Vile’s door.

I have to admit, I don’t like the confusing title, but Batman: Secret Files – Huntress #1 is a well-done comic book that almost makes me want to get back into the Batman publishing line, featuring truly inspired art and a story that balances the personal and the superhero-al very well, earning 4 out of 5 stars overall.  Also: Hue Vile is an awful, horrifying, gross monster of a Bat-villain, and I sincerely hope to see more weirdos like him joining the usual gang of Arkham idiots.

I want Tamaki's Huntress to get her own ongoing series based on this one-shot, especially with Lapham art. It's the kind of book that'll get you back into the Bat-books again.