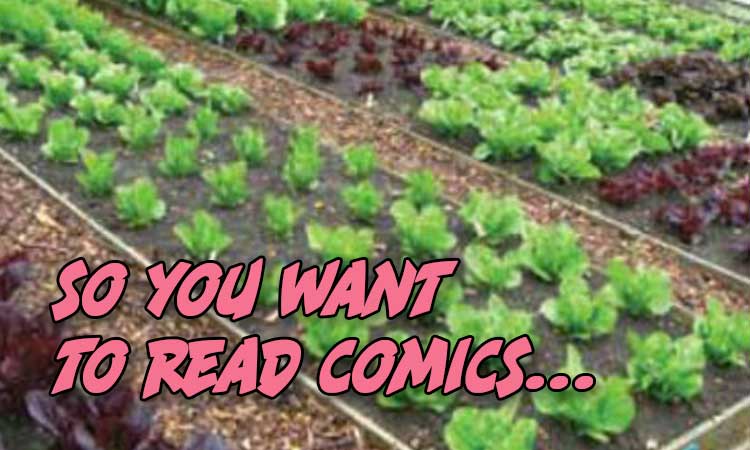 So You Want To Read Comics: Gardening Edition

Life’s a garden, dig it, just like you dig this latest edition of “So You Want to Read Comics”. A weekly feature where we take a look at a single topic and then offer up a pair of comic book recommendations, perfect for new readers, based on that topic.  This week we’re taking a deeper look into the world of gardening.

A couple weeks ago we did one of these features for nature lovers. During that, gardening was briefly mentioned. This felt like an oversight, since the world of gardening goes far beyond just appreciating plants.  Going as far back as the days of the Neanderthal, humans have purposely planted, nurtured, and maintained various types of plants.  Starting out as primarily agricultural, gardens eventually began being used for their decorative, and then eventually their therapeutic qualities.  The science and art of creating a garden are incredibly varied.  Based on culture, region, even religion, a garden can take on multiple different forms and at their best represent a merging of the human world and the natural world. In 2009 it was estimated that 43 million households in The U.S. had gardens, and that’s just ones that are designed to produce food, that’s not including ones designed primarily for aesthetic purposes.

So let’s check out a couple comic books whose pages gardeners can use their green thumbs to flip through.

Batman: Poison Ivy is a Batman story that centers around the character Pamela Isley, better known as Poison Ivy (in case the title didn’t give that away).  In this story, we find Poison Ivy having left the civilized world and having found her own paradise she can enjoy in solitude.  Unfortunately, that solitude is disturbed in a major way and this sends her on a murderous path of revenge, this of course draws in everyone’s favorite Caped Crusader. While this does eventually transition into a fairly typical Batman focused detective story, at its heart it’s still about a woman who desperately just wanted some peace among her plants, which is something that anyone who’s spent any time pruning, tilling, or watering will tell you is a precious thing.  Gardens can often be sanctuaries for not only those who did the planting, but those who are invited in as well, so it stands a reason that if this sanctuary is disturbed, the response may be in kind.

One of the goals of this feature, is to not only introduce new people to comic books, but also explore the versatility of the medium and to show it can go beyond just dudes in tights.  That being said, this entry is more of a reverse of that first goal. Sometimes a comic exists that’s perfect for introducing fans of comics into a new hobby.  That’s where this one comes in. Being more than just an illustrated how-to guide, this comic goes so far as to actually have a cute little story about a pair of neighbors act as the frame for all the tips and tricks that comes with horticulture. It should be noted too that this isn’t a small guide either.  Clocking in at over 150 pages, the topics covered by this one run through the entirety of the growing process, from finding the perfect spot to plant a garden, all the way to properly harvesting your veggies.  Now, I’m not saying that this isn’t also a good graphic novel for new readers, I’m just saying that it might not be very likely that a reader of this is going to want to go out and find the latest issue of Moon Knight.

So, what do you think of these recommendations?  Do you have some suggestions of your own?  What’s your favorite flower (I’m a Snapdragon guy myself)? Let us know in the comments section below.